S. Koreans enjoy holidays despite global jitters over tensions with the North 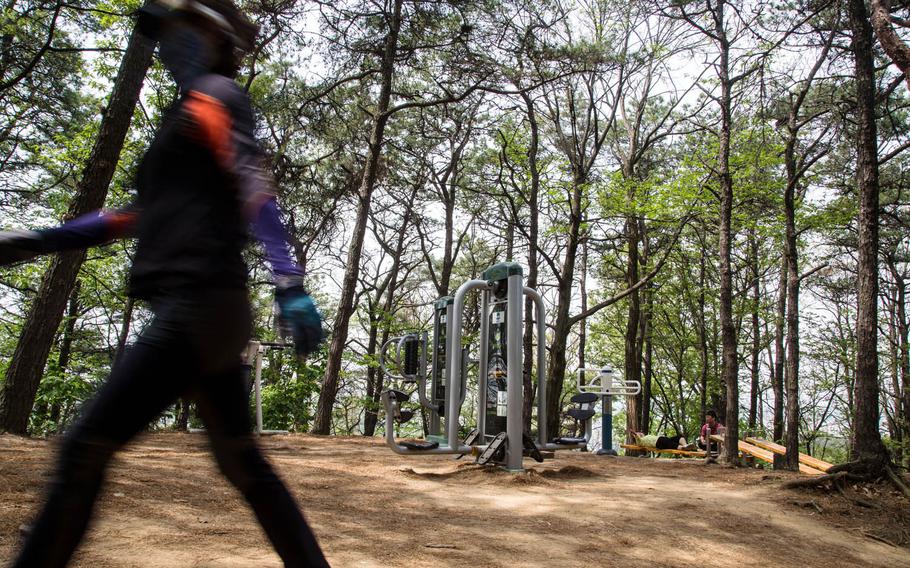 Buy Photo
South Koreans hike, exercise and relax just minutes outside of Osan Air Base, South Korea, a presumed ground zero for rocket attacks in case of a war with the North, Tuesday, May 2, 2017. (Marcus Fichtl/Stars and Stripes)

Buy Photo
South Koreans hike, exercise and relax just minutes outside of Osan Air Base, South Korea, a presumed ground zero for rocket attacks in case of a war with the North, Tuesday, May 2, 2017. (Marcus Fichtl/Stars and Stripes) Buy Photo
South Korean children enjoy a field trip to the park minutes outside of Osan Air Base, South Korea, a presumed ground zero for rocket attacks in case of a war with the North, Tuesday, May 2, 2017. (Marcus Fichtl/Stars and Stripes)

SEOUL, South Korea — South Koreans clogged roads and airports this past weekend, but they weren’t fleeing tensions that have prompted global jitters over North Korea’s nuclear weapons program. They were going on vacation.

While fears are high that the new U.S. administration and Pyongyang are edging closer to a full-fledged conflict, South Koreans for the most part feel they are in the safest place they could be despite Seoul being about 35 miles from the heavily militarized border.

“North Korea is not likely to provoke by crossing a certain line because they know that if they cross that line their regime will collapse,” said Park Hyunghoo, a 46-year-old train operator from Goyang, north of Seoul.

The streets of Seoul, meanwhile, were relatively quiet as many city dwellers took advantage of extended holidays to travel to the countryside or abroad.

Media outlets were focused on the upcoming snap election to choose a president after the previous leader was ousted and arrested over a corruption and influence-peddling scandal.

Widespread anger was directed not at North Korea but at the country’s traditional ally, the United States, over the rushed deployment of an advanced missile-defense system and comments by President Donald Trump that Seoul should pay for it.

The mood was in sharp contrast with that in neighboring Japan, where government advisories and TV talk shows have been dominated by talk of what to do in the event of a possible missile strike.

One of Tokyo’s major subway systems even shut down lines for 10 minutes Saturday morning after receiving warning of a North Korean missile launch, though some among the public criticized the move as an overreaction. Metro officials said it was the first time service had been suspended in response to a missile threat.

North Korea did launch a missile on Saturday, but it exploded over land shortly after takeoff, U.S. and South Korean military officials said while warning the communist state is clearly making progress in its weapons programs.

In another first, the Japanese prime minister’s office has issued instructions on how to respond to a missile attack and warned people may only have 10 minutes to evacuate targeted areas — the time estimated for a missile to reach the country.

Japan has been on heightened alert since at least three missiles launched earlier this year landed in waters near its coastline. Experts believe the North already has the ability to strike U.S. bases and other targets in Japan, South Korea and possibly as far as Guam.

Many South Koreans believe the fact that they share a peninsula with the North, divided by a heavily fortified buffer zone, means they won’t be targeted since that would almost surely result in a counterattack by U.S.-led forces. They’ve also long grown inured to the bluster and belligerent rhetoric from Pyongyang.

The U.S. and South Korean militaries on the other hand have stepped up joint war games and other shows of force in a bid to prevent the North from conducting another nuclear test or launching an intercontinental ballistic missile, which officials say would be a red line.

Some South Koreans and foreigners living in the country said they were more concerned than during past periods of tensions.

“North Korea isn’t striking, but our country seems to be closer to a crisis of war because of the U.S. president — Trump’s character and personality and also the U.S. talk of preemptive strikes,” Baik Ho Young, 19, said while standing outside Seoul’s central train station.

The Korea Art Co., which is organizing the June shows, said the publicity trip was canceled “due to widely reported military tensions in the region.” It said the concerts would be held as scheduled, according to the Yonhap news agency.

Expat forums also buzzed with questions about what to do if a crisis occurred.

U.S. Forces Korea, which has a detailed evacuation plan for Americans covered by the status of forces agreement, for the first time took people to Japan during a regular evacuation drill late last year. The military also plans another evacuation drill this summer but stressed it was routine.

Experts also pointed out that despite the heightened rhetoric from both sides none of the telltale signs of imminent conflict have occurred, such as mass movements of North Korean soldiers, U.S. orders to evacuate noncombatants or a State Department travel advisory.

An official with the U.S. Embassy in Seoul said its consular operations remain normal. The embassy encourages all U.S. citizens traveling to or living in South Korea to register online with its Smart Traveler Enrollment Program. They also may check the consular section’s website, “which has a variety of information that may be of use for specific needs and situations,” the official said.

Tourism officials also said fears of North Korean provocations appears to be having little effect in terms of travel to and from the peninsula.

“This situation with tension on the peninsula is not something that started just yesterday is it? It happens all the time,” said Lee Seung Jae, an official with the Ministry of Culture, Sports and Tourism.