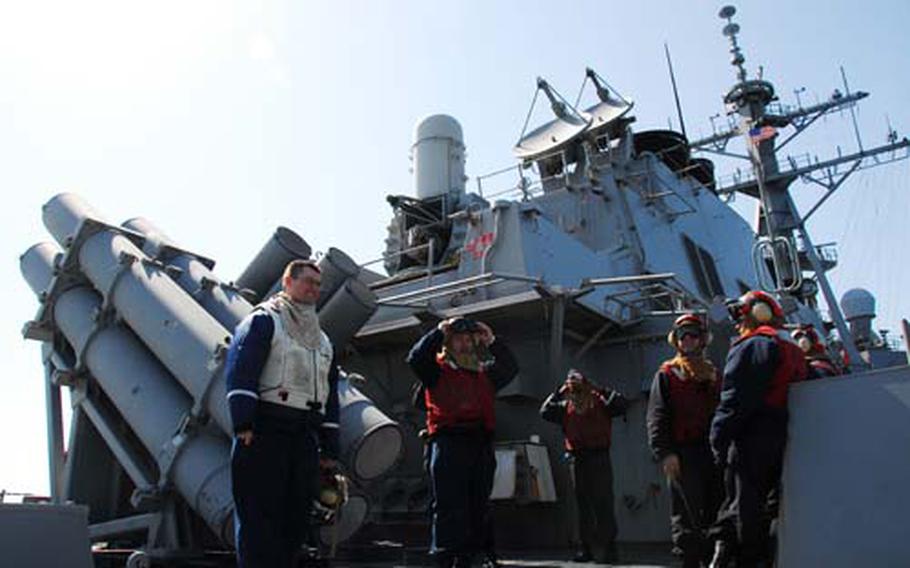 Crew members of the USS Curtis Wilbur wait for the arrival of a helicopter on Saturday. The Curtis Wilbur is one of four U.S. ships standing by to assist in a rescue efforts to get to 46 South Korean sailors missing after the South Korean ship Cheonan sank on March 26. Most of the South Korean and U.S. ships at the wreckage site are also there as a deterrent to nearby North Korea, according to the U.S. Navy officer in charge of the American forces there. (Ashley Rowland / S&S)

Crew members of the USS Curtis Wilbur wait for the arrival of a helicopter on Saturday. The Curtis Wilbur is one of four U.S. ships standing by to assist in a rescue efforts to get to 46 South Korean sailors missing after the South Korean ship Cheonan sank on March 26. Most of the South Korean and U.S. ships at the wreckage site are also there as a deterrent to nearby North Korea, according to the U.S. Navy officer in charge of the American forces there. (Ashley Rowland / S&S) 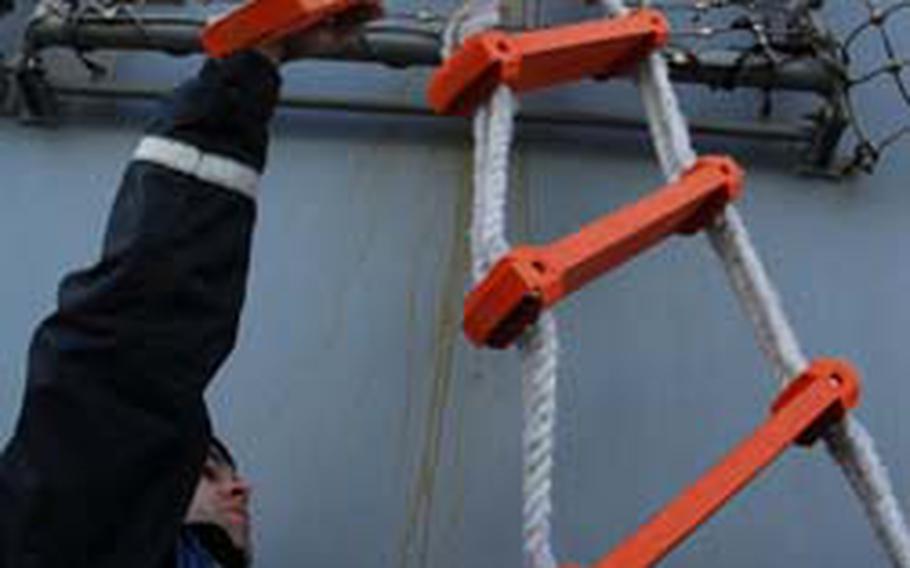 Sailors on the USS Curtis Wilbur on Saturday drop a ladder to passengers waiting below. (Ashley Rowland / S&S) 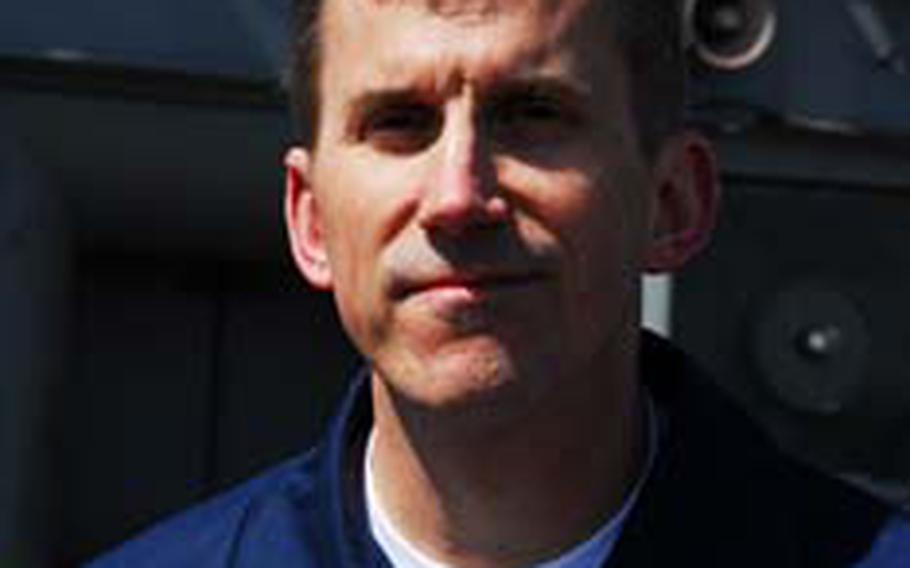 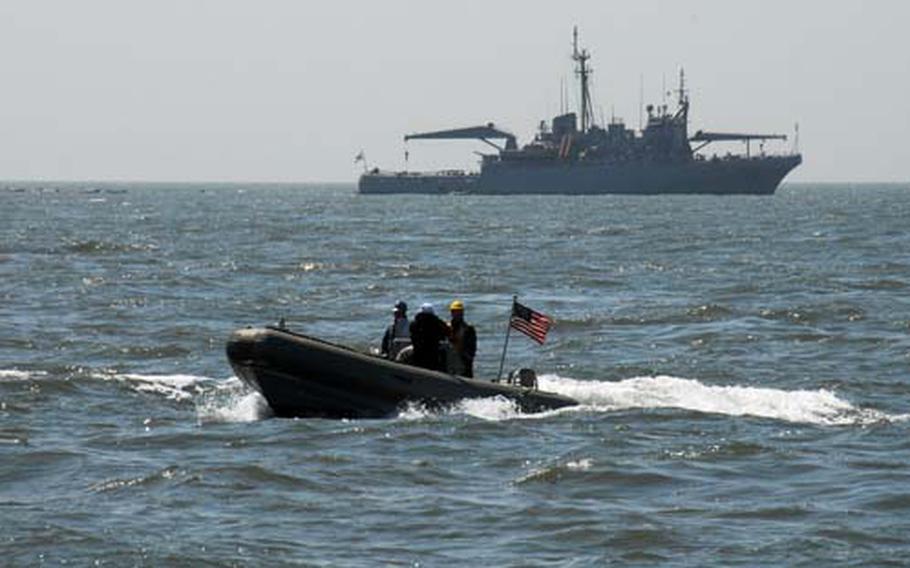 U.S. Navy personnel in a Rigid Inflatable Boat check the waters near a South Korean salvage ship, in the background, Saturday at the site of the wreckage of the South Korea patrol ship Cheonan, which sank on March 26 after an explosion. (Ashley Rowland / S&S)

ABOARD THE USNS SALVOR, Yellow Sea &#8212; Clear skies and a billowing sea Saturday were not telling of what was beneath the surface: brutally strong currents, frigid temperatures, and water so murky that divers would barely be able see in front of them if they had to go in.

Those conditions, U.S. Navy divers and officials aboard this rescue and salvage ship said, are expected to persist and will make salvaging the wreckage of the South Korean patrol ship Cheonan that mysteriously sank more than a week ago unusually difficult.

&#8220;This is a very challenging dive scene,&#8221; said Capt. Charlie Williams, commodore of Destroyer Squadron 15, operating out of Yokosuka Naval Base, Japan.

Since the explosion, South Korea had been reporting 46 sailors missing. However, South Korea&#8217;s military said Saturday that the body of a missing sailor was found, the first since 58 crewmembers of the Cheonan were rescued within hours of the explosion.

On Saturday, The Associated Press reported that South Korea&#8217;s military ended its underwater search for the missing sailors. Families of the sailors asked the military to suspend the operation for fear of casualties among divers.

Media reports also said the body of a fisherman aboard a South Korean trawler was recovered Saturday but eight others were missing after the boat collided with a freighter Friday night.

Military efforts, however, remain focused on the Cheonan&#8217;s wreckage.

The 1,200-ton patrol ship sank at 9:22 p.m. on March 26 after an explosion split it in half near the maritime border between South and North Korea. Officials confirmed 45 crewmembers remained missing as of late Saturday, and they believe many were trapped inside the stern&#8217;s dining hall and bunking areas. If those sailors survived the explosion and were able to seal off the rooms where they were trapped, defense officials said, their air supply was expected to have run out on March 29; divers have pumped air into a crack on the stern of the ship, according to the South Korean Joint Chiefs of Staff.

Officials still do not know what caused the explosion, and South Korea and the U.S. have said there&#8217;s no indication that North Korea was involved. Yet, South Korea&#8217;s defense minister speculated Friday that a torpedo might have sunk the ship, after he told lawmakers earlier in the week that North Korea might have dispatched a mine to the area.

As of Saturday, four U.S. Navy ships and about 20 South Korean ships were at the wreckage site.

Williams said the U.S. forces are on hand to provide medical and safety assistance to South Korea, as well as force protection.

&#8220;That&#8217;s exactly why the other ships are here for &#8212; to provide that air defense and other capabilities that cruisers and destroyers have,&#8221; he said, referring to the Korean navy ships and the guided missile destroyers USS Curtis Wilbur and USS Lassen. The dock landing ship USS Harper&#8217;s Ferry, out of Sasebo Naval Base, Japan, arrived Friday.

Sailors aboard the Salvor and Curtis Wilbur said Saturday was the first day of good weather they had seen since arriving last weekend.

The water temperature &#8212; a bone-chilling 42 degrees on Saturday &#8212; and lack of visibility were expected to remain problems for divers and limit the time they could spend in the water.

Williams said he did not know when that would be, but the U.S. would be &#8220;using all capabilities&#8221; during the salvage of the sunken ship and the recovery of any bodies trapped inside.

A 16-member U.S. rescue and salvage dive team and a six-member underwater explosive ordnance disposal team are at the site. The EOD team would dive first into the wreckage to ensure any munitions aboard are stable.

During the salvage mission, the Salvor will anchor above the stern of the Cheonan, providing support and pumping air to divers in heavy, helmeted diving suits below, as well as communicating with them undersea.