S. Korean protesters demand president step down, but that’s not so easy 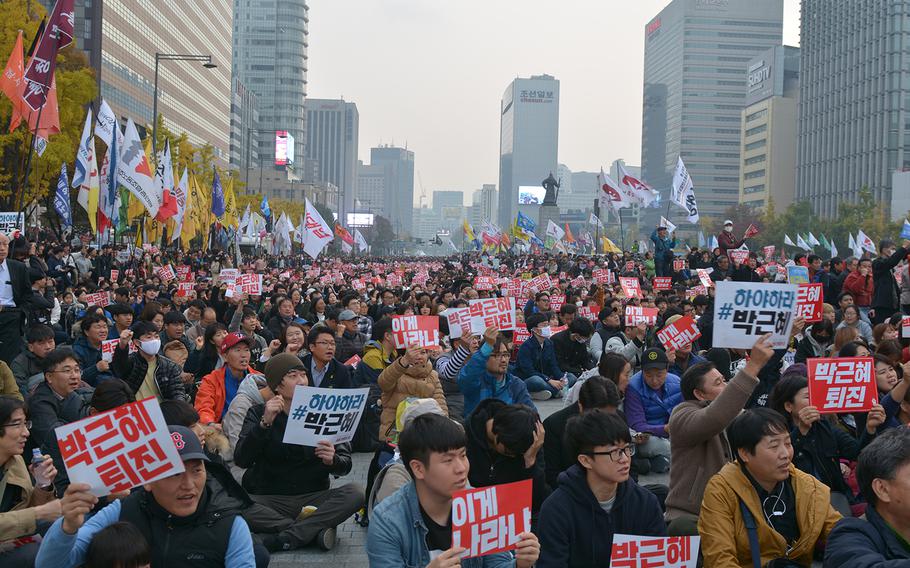 Tens of thousands of protesters gather in the historic Gwanghwamun Square in Seoul on Saturday, Nov. 5, 2016, demanding that scandal-ridden President Park Geun-hye step down. (Kim Gamel/Stars and Stripes)

Scandal-ridden President Park Geun-hye has just more than a year left in office, and the opposition would rather be gearing up for the December 2017 election.

That didn’t stop tens of thousands of South Koreans from massing Saturday in Seoul to demand that she step down amid allegations – many unproven – that she allowed a confidante to wield Rasputin-like influence over everything from government policies to wardrobe choices.

The protest was a resounding rejection of the conservative leader’s speech the day before in which she took blame for the latest crisis to plague her government and asked for forgiveness.

Instead, protesters sang and pumped colorful “Park Geun-hye out” banners into the air as speakers on a stage in historic Gwanghwamun Square called for her ouster. They lit candles and marched through the city center as evening fell, chanting slogans that included “criminal” and “treason.”

Nearly 18,000 police in riot gear used buses and trucks for crowd control while lining the streets leading to the presidential mansion known as the Blue House.

Police estimated the crowd at around 50,000, although organizers put the size at around 200,000, making it the largest anti-government demonstration in years, according to the Yonhap news agency.

The protest was largely peaceful, in contrast to those in past years when South Korean students were known to lob Molotov cocktails and clash with police.

Park, who is prevented by constitutional term limits from seeking re-election, faces growing anger over revelations that she allowed longtime confidante Choi Soon-sil to influence government policies despite having no official position.

The 64-year-old president has admitted that she relied on her friend for help editing speeches and other unspecified “public relations” issues.

But media reports have carried speculation that Choi, whose late father was a religious cult leader, had access to confidential documents and held sway over North Korean policy and other state affairs as well as the selection of presidential aides and even outfits.

Choi was arrested last week on suspicion of fraud and influence-peddling. On Sunday, a court also issued arrest warrants for two former presidential aides as the scandal widened.

“President Park had many great mistakes and she had shaman religion,” protester Na Tae-hong said, sitting near a statue of the Korean alphabet’s inventor, King Sejong. “She has just one year remaining as president, but we want her to fall down from power now.”

The public call for a resignation, however, has so far not been forcefully taken up by opposition parties, which seem more intent on making Park the lamest duck possible.

If Park were to resign, the constitution says a successor should be elected within 60 days, which would have everyone scrambling.

In a bid to calm the situation, Park fired eight aides and nominated three new top Cabinet officials, including the prime minister. But the main opposition Democratic Party rejected her choices, saying she didn’t consult parliament.

The head of the party, Rep. Choo Mi-ae, threatened to stage protests until Park and her Saenuri party accept demands.

The White House insisted the alliance between the two countries would remain intact despite the turmoil.

Spokesman Josh Earnest said President Barack Obama has had an effective working relationship with Park as well as her predecessor.

“Obviously, she’s facing a difficult domestic political situation, and that’s something that I won’t weigh in on. I’m not aware that the President has weighed in on it, either in public or in private,” he said, according to a transcript of remarks made while aboard Air Force One.

He said Obama has not spoken to Park since returning from a visit to Asia in September.

“But all of the other elements of our alliance remain in place. And the U.S. commitment to that alliance is as strong as ever,” he added.

The U.S. has about 28,500 servicemembers stationed in South Korea, which remains technically at war with the North after the 1950-53 conflict ended in an armistice instead of a peace treaty.

In her second televised speech in just more than a week, an emotional Park vowed Friday to accept a direct investigation into her actions “if necessary,” but did not comment on specific allegations or promise any concrete actions.

Park, 64, also tried to tap into the sympathy that helped propel her to office. Her father, dictator Park Chung-hee, was assassinated by his own spy chief in 1979. Her mother was killed during an earlier attempt on her father’s life.

The president, who is not married and is estranged from her siblings, said loneliness pushed her to spend more time with Choi.

“Living alone, it was difficult to find people who could help me with the personal things I needed to get done, so I began receiving help from Choi Soon-sil, with whom I had a long relationship,” Park said Friday.

But she denied speculation that she had “fallen into worshipping cult religions or that shamanistic rituals were held at the presidential Blue House.”

The speech has failed to quell the growing anger. A national poll released Friday had Park’s approval rating at 5 percent, the lowest for any sitting South Korean president.