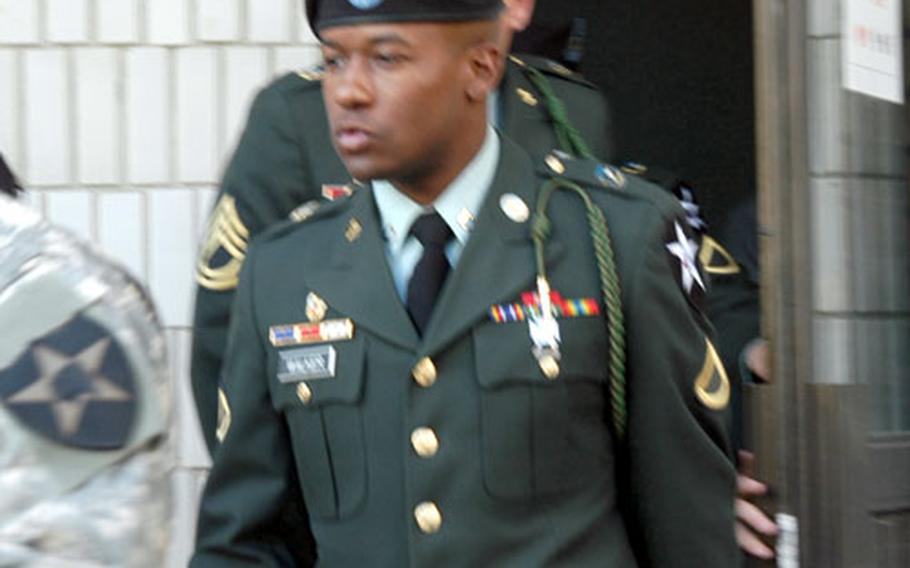 Pfc. Anthony Walker Jr., a soldier based at Camp Red Cloud, South Korea, leaves Uijeongbu District Court on Wednesday afternoon. Two months ago, Walker pleaded guilty to a charge of assault. On Wednesday, the judge heard from the victim, who had a beer bottle smashed across his face. Walker’s sentencing is scheduled for Jan. 11. (Teri Weaver / S&S)

UIJEONGBU, South Korea &#8212; A South Korean prosecutor here is seeking a 2&#189;-year prison sentence for a 2nd Infantry Division soldier who has admitted he assaulted a Korean man with a beer bottle.

The victim, Cho Su-whan, testified in court Wednesday that he&#8217;s been out of work since the July attack. The 34-year-old chef from Uijeongbu told the court he has had multiple surgeries to repair the damage and the scars and expects to have at least three more.

Pfc. Anthony Walker Jr., 20, has given Cho $15,000 of his own money to compensate for his injuries, both Cho and 2nd ID officials said this week.

Walker still faces a sentence on Jan. 11 from Judge Kim Byung-ju. At a previous court hearing, the prosecutor had asked for a five-year sentence.

Wednesday&#8217;s court hearing allowed for both the accused and the victim to speak to the judge. Walker admitted his guilt in an October hearing.

On July 2, Cho said, he was walking in an alley in Uijeongbu when he passed three U.S. soldiers. The Americans and the Korean bumped shoulders because the alley was so narrow, Cho testified. Cho apologized to the soldiers in English, he told the court.

A few moments later, Cho was whirled around and struck across the face with the bottle, he testified. Earlier this summer, Cho told Stars and Stripes he was attacked after he had stopped to urinate by the roadside.

On Wednesday, Judge Kim said Walker has indicated that Cho was the one who picked the fight.

After the hearing, Cho said he would give $1,000 of the settlement money to his friend who helped him in the fight. Cho said he plans to use the rest of the money to defray costs of the surgeries.

Cho also said he might have dropped the charges in return for an apology from Walker. But without remorse from Walker, Cho said, he feels little satisfaction from the case.

Cho has a brother who lives in Chicago and his best friend lives in Alaska. He said that before the fight he felt good about having U.S. troops around.