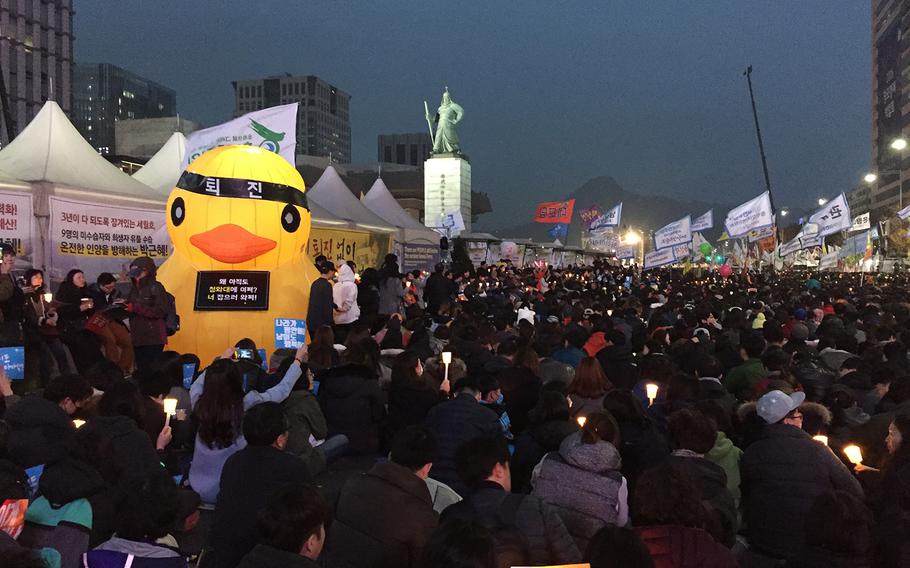 Hundreds of thousands of South Koreans fill the historic Gwanghamun Square and surrounding streets in Seoul on Saturday, Nov. 19, for the fourth week in a row. They’re calling on President Park Geun-hye to resign over an influence peddling and corruption scandal involving a close friend. (Kim Gamel/Stars and Stripes)

SEOUL, South Korea — The influence-peddling scandal that has prompted calls for President Park Geun-hye to resign escalated Sunday, with prosecutors accusing her of collusion.

The president’s lawyer rejected the investigation results, calling them “imagination and conjecture.”

The dramatic developments came a day after hundreds of thousands of South Koreans poured into the streets of Seoul for the fourth weekend in a row, waving plastic candles and chanting “Park step down.”

Park is accused of letting longtime friend Choi Soon-sil — daughter of a late cult leader — wield undue influence over everything from government policies to her wardrobe choices.

Sunday’s allegations against Park came as Choi, 60, was formally indicted on charges including abuse of authority, coercion, attempted coercion and attempted fraud, according to the Yonhap news agency.

She’s suspected of using her presidential ties to persuade dozens of companies, including Samsung and Hyundai, to donate more than $65 million to two nonprofit foundations she controlled.

Yonhap reported that prosecutors said Park colluded with Choi and two former key aides in “considerable parts” of the alleged criminal acts. South Korea’s constitution says the president is immune from prosecution except in cases of treason or insurrection, although she can be investigated.

“The special investigation headquarters will continue to push for an investigation of the president based on this judgment,” chief prosecutor Lee Young-ryeol told a televised news conference.

Park’s attorney, Yoo Yeong-ha, denied the allegations against the president and said he will no longer cooperate with the investigation, according to Yonhap.

The Blue House, as the president’s office is known, expressed “deep regret” over the results. It said Park would prove her innocence by “actively cooperating with an upcoming independent counsel probe.”

“The investigation team’s announcement is by no means true,” presidential spokesman Jung Youn-kuk said in a statement.

The crisis has plunged South Korea into political uncertainty at a critical time as the government is dealing with a rising nuclear and missile threat from North Korea as well as apprehension over U.S. President-elect Donald Trump’s potential Asian strategy.

Elections are scheduled for December 2017. If Park steps down from her single term in office before that, an election must be held within 60 days, giving political parties little time to prepare.

Opposition leaders have increasingly joined the calls for Park’s resignation and have begun contemplating impeachment proceedings after weeks of hedging, presumably because they preferred to reduce her to a figurehead while they prepared for the scheduled vote.

Park’s rejection of the prosecutorial findings are sure to anger the anti-government protesters even further.

So far the weekly protests have been peaceful, and many people came Saturday with children in tow.

“I would like to show my baby that the master of this country is the people. This is not North Korea but South Korea, and we are a democracy,” Kim Daeman, a computer programmer, said as his 14-month-old played with a plastic candle. “We will keep holding the rallies until she steps down.”

Park, 64, has admitted to letting Choi edit some speeches and has apologized twice in televised addresses. She also has tried to pursue a veneer of normalcy, emerging from a hiatus last week to name new vice foreign and culture ministers and announced she will attend a trilateral summit in Tokyo next month.

“Having a president like Park Geun-hye is a shame,” said Yoo Byung-hun, a 57-year-old businessman who was attending his second rally. “I don’t believe the prosecutors and politicians are doing their job so the people have to do it for them.”

Thousands of the president’s supporters also gathered near the city’s main train station Saturday. Many said they believed the allegations against Park were part of a North Korean conspiracy. Others said she was democratically elected and should be allowed to complete her term.

“We need to protect President Park even though she made a very small mistake,” said Lee Heung-jae, a 70-year-old retiree. “We don’t need a revolution. We need a democracy.”

On Friday, the head of the main opposition Democratic Party, Choo Mi-ae, raised the possibility that opposition leaders would pursue impeachment proceedings if the president didn’t heed the calls. She also cited “information making the rounds that the president is preparing martial law as a last resort.”

Park’s spokesman and the Ministry of National Defense strongly denied the rumors.

“Such political demagoguery is much too irresponsible to be made by a responsible leader of the largest opposition party,” Jung said on Friday. “We strongly urge everyone to refrain from making comments instigating further confusion.”

The allegation is especially troubling for Park, whose father was the dictator Park Chung-hee. He led the country for decades until he was assassinated in 1979.