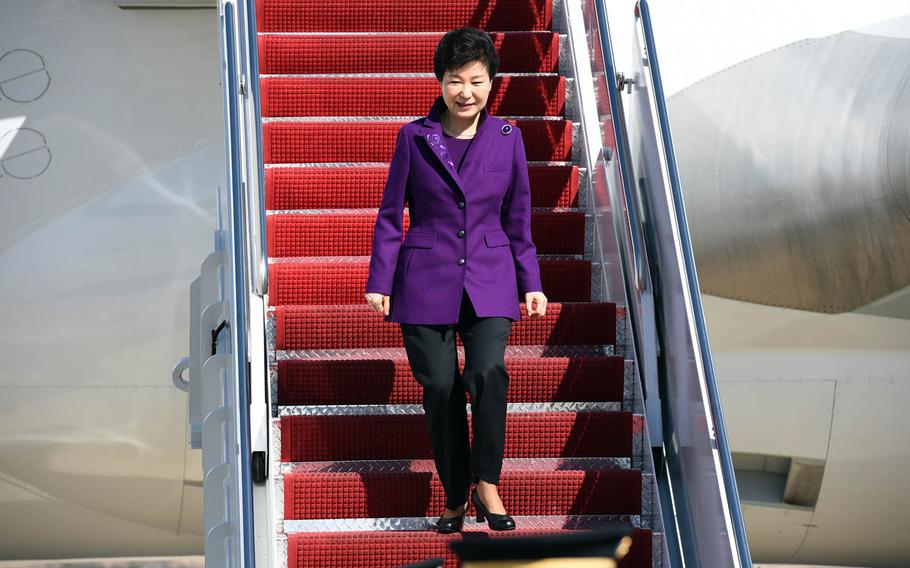 SEOUL, South Korea — Pressure mounted for President Park Geun-hye to resign as South Korea’s main opposition party launched a campaign against her and the nation braced for more mass protests over a bizarre influence-peddling scandal.

The head of the opposition Democratic Party jumped into the fray Friday, reportedly suggesting that Park may be contemplating martial law — an extremely sensitive subject in a country that only emerged from decades of dictatorship in 1987. Park’s office and the Ministry of National Defense denied the rumors.

The crisis has plunged South Korea into political uncertainty at a critical time as the government is dealing with a rising nuclear and missile threat from North Korea as well as apprehensions over U.S. President-elect Donald Trump’s potential Asian strategy.

Tens of thousands of people were expected to gather in Seoul and other cities for the fourth weekend in a row Saturday. In a new twist, Park’s supporters planned a separate rally, raising fears of violence.

With Park’s term already slated to end in just over a year, opposition leaders had stopped short of calling for her to step down, presumably preferring to reduce her to a figurehead while they prepared for the December 2017 vote.

Under the constitution, a resignation would force new elections within 60 days. That would give the fractured opposition little time to prepare, with no clear favorite to replace her.

But anger has risen as the allegations escalate against Park’s close friend Choi Soon-sil, who has been arrested on suspicion of using her connections to extort money from large corporations that she used for her foundations and even her daughter’s equestrian training.

Park admitted to letting Choi edit some speeches and has apologized twice in televised addresses. That has done little to quell the growing protest movement against her.

Prosecutors also are in negotiations with an attorney in a bid to question Park. The president has immunity from prosecution except in cases of treason, but she can be investigated.

She cited “information making the rounds that the president is preparing martial law as a last resort” and warned that the opposition will take legal measures against Park if she doesn’t comply, according to the Chosun Ilbo newspaper.

“Such political demagoguery is much too irresponsible to be made by a responsible leader of the largest opposition party,” he told reporters at the presidential Blue House. “We strongly urge everyone to refrain from making comments instigating further confusion.”

The allegation is especially troubling for Park, whose father was the dictator Park Chung-hee. He led the country for decades until he was assassinated in 1979.