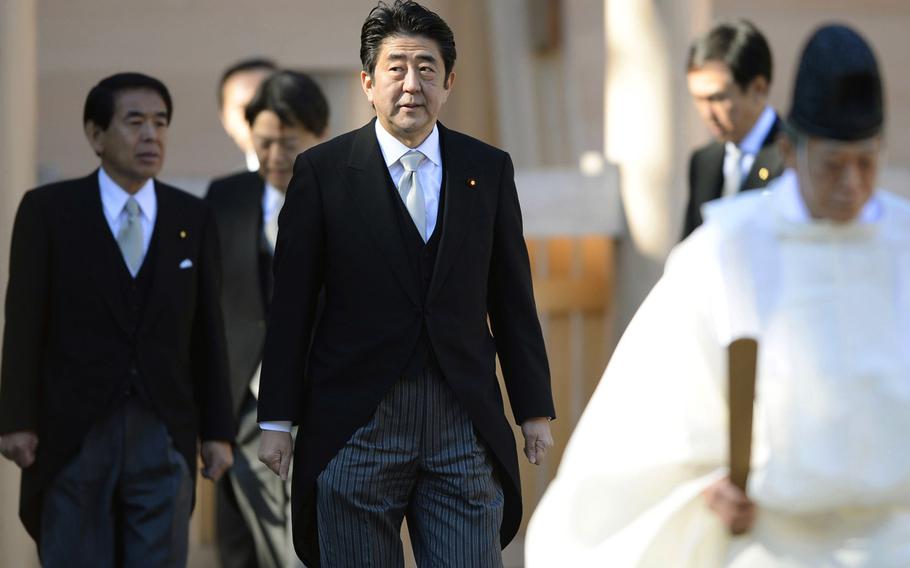 Japan's Prime Minister Shinzo Abe, center, is escorted by a Shinto priest, right, as he pays his new year's prayer at the Grand Shrine of Ise, in Ise, western Japan, Monday, Jan. 6, 2014. Abe said he wants to explain to leaders in China and South Korea about his visits to the Yasukuni Shrine in Tokyo, which honors the country's war dead. (Kyodo News/AP Photo)

Abe’s Dec. 26 visit to the Yasukuni Shrine, which honors Japan’s war dead, has plunged bilateral relations to a low point. A survey by the Asan Institute for Policy Studies, conducted the week after Abe’s visit, found that only 1.2 percent of respondents held a favorable opinion of the prime minister, compared with 1.9 percent for Kim.

Meanwhile, an overwhelming majority of South Koreans — 86.9 percent — now view Korea-Japan relations as “bad,” with little difference in opinion due to age or political ideology, according to another Asan poll conducted Dec. 29-31. More than half of the 1,000 respondents expect relations to deteriorate further.

The dispute between two key U.S. allies was reportedly a topic of discussion during a meeting between South Korean Foreign Minister Yun Byung-se and U.S. Secretary of State John Kerry earlier this week in Washington.

To the disappointment of many South Koreans, Kerry did not address the Yasukuni visit during a news conference after the meeting, though Yun said the two “recognized the growing uncertainty pervading Northeast Asia in recent times.”

“In particular, I pointed out that historical issues stand in the way of reconciliation and cooperation in this region, and I emphasized the need for sincere actions,” Yun said in an apparent reference to Tokyo.

Japan’s brutal colonization of the Korean peninsula and occupation of China before and during World War II still remain sore points with its neighbors, who believe Tokyo has not fully acknowledged its wrongdoings. Tokyo’s possible expansion of the role of its defense-only forces has raised eyebrows in South Korea, where some believe Japan is returning to its militaristic past and could someday pose a threat to the region.

Forty-two percent of respondents said the Seoul-Tokyo dispute over ownership of the Dokdo islets, called Takeshima in Japan, is the most important issue hurting the relationship, according to Asan. Thirty-three percent cited Japan’s “distortion” of history, followed by the forced sexual slavery of Korean women during the Japanese occupation at 13.8 percent.

The survey also showed somewhat disparate attitudes toward Beijing, with nearly two-thirds believing security cooperation with Japan would be necessary if China continues its rise. However, 74.5 percent said Seoul should cooperate with China to resolve historical grievances with Tokyo.

The survey also found that support for a Japan-South Korea summit had dropped by 8.6 percentage points since September to 49.5 percent.