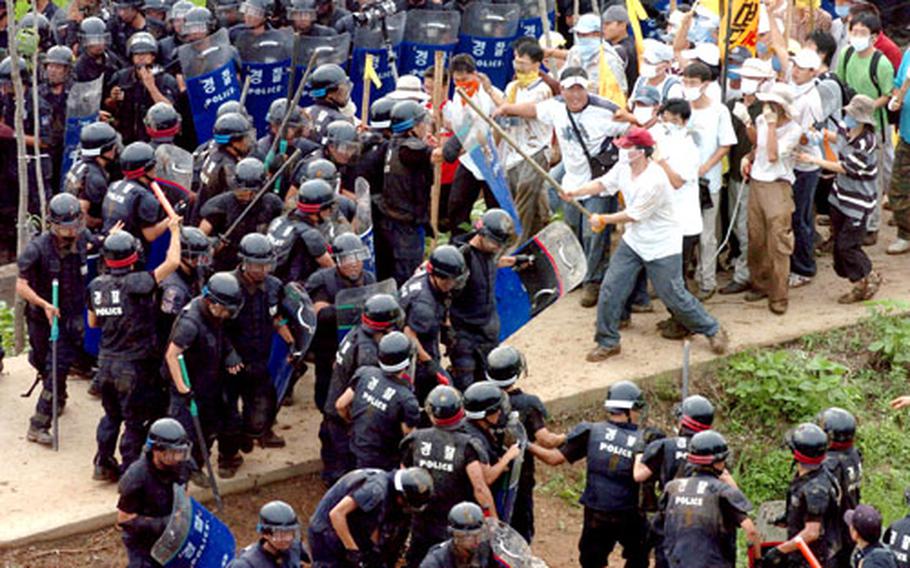 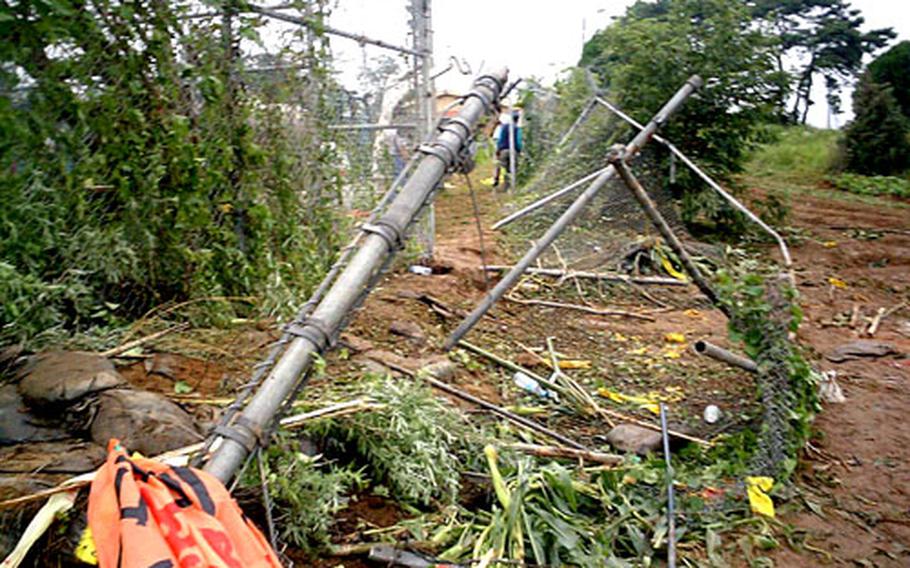 A section of Camp Humphreys perimeter fence lies askew after it was hauled down by demonstrators. (U.S. Army photo) 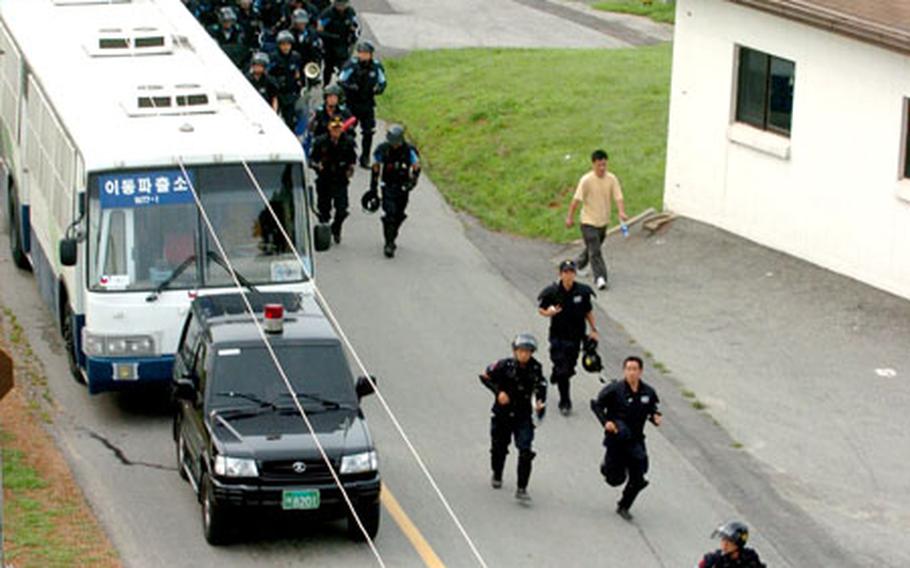 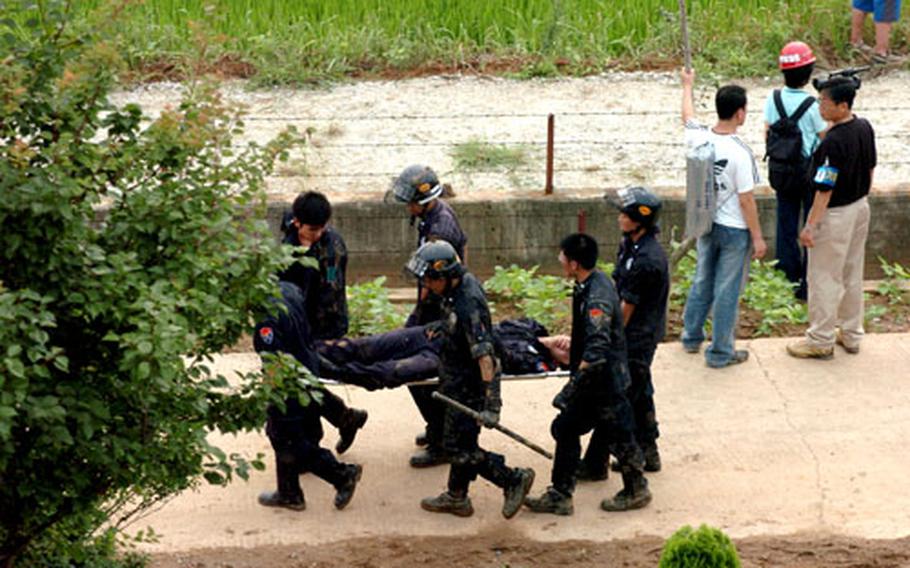 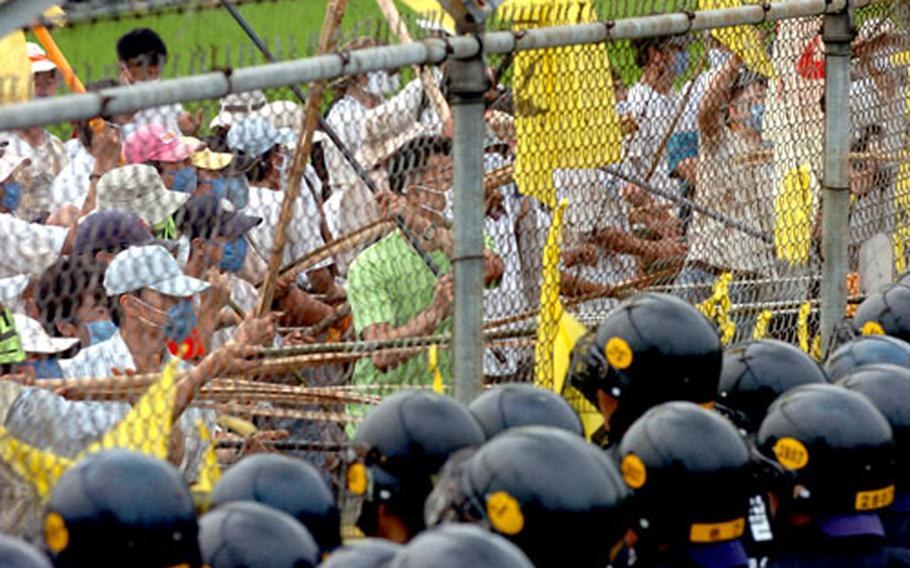 Work crews on Monday reinstalled long sections of Camp Humphreys perimeter fence torn down by protesters who yanked on nylon ropes, rushed through the breach, and tied yellow steamers to an interior fence, then exited the base. Protesters also threw steel pipes and rocks at police, and as many as 60 officers were reported injured.

At one point, the violence grew so intense Korean National Police officers positioned inside the fence decided to cut it open so they could dash through and pull several injured officers to safety, said Harry M. Parent, Camp Humphreys&#8217; director of Plans, Training, Mobilization and Security.

Camp Humphreys is a U.S. Army helicopter base in Pyongtaek that is slated to triple in size by 2008 under an agreement between the United States and South Korea.

The U.S. military&#8217;s plan to turn Camp Humphreys into its premier installation in South Korea calls for the 1,230-acre base to expand to 3,558 acres and increase the number of those living or working at the base to 45,000. U.S. forces in and north of Seoul would relocate to Camp Humphreys under the agreement.

But a key next step in the plan is the South Korean government&#8217;s purchase of thousands of acres outside Camp Humphreys to create space for the expansion.

Many Pyongtaek area officials and business leaders have said they welcome the plan, which is expected to entail a major boom for the region&#8217;s real estate, construction and retail sectors and spur growth in its transportation system.

But among groups opposing the move are those who contend the Camp Humphreys expansion will displace landowners, farmers and other residents.

&#8220;The reason the United States government is here is to protect and defend our country &#8212; but they&#8217;re taking our homes, they&#8217;re taking our land,&#8221; Kim Yong-han, leader of the Task Force To Oppose The Expansion of U.S. Bases in Pyongtaek, said Monday. Kim said he expects another protest over the issue in October or November.

U.S. Forces Korea officials on Monday declined to comment on the protesters&#8217; objections to the planned Camp Humphreys expansion.

Kim Ki-ho, president of the Anjung-ri Merchants&#8217; Association, said Monday that local merchants support the Camp Humphreys expansion because it will spawn major economic development in the area. The association represents nearly 300 local businesses in Anjung-ri, the section of Pyongtaek in which the base is located.

His and other local business groups will hold counterdemonstrations if the protesters stage further rallies in the Camp Humphreys area, Kim said.

The violence erupted Sunday afternoon after around 7,000 demonstrators converged outside the installation and faced off with 10,000 KNP officers in riot gear. The demonstration had been planned months in advance and both South Korean authorities and Camp Humphreys officials were expecting it, officials said.

There were no injuries to U.S. servicemembers during the protest, said Susan Barkley, a Camp Humphreys spokeswoman.

Three protesters were arrested and charged with assaults on KNP officers, but they were released pending further investigation, authorities said.

Some demonstrators were seen bleeding during the clashes, but there was no immediate word Monday on how many may have been injured.

&#8220;Both sections of fence were immediately repaired by our [Department of Public Works] as soon as the demonstrators were cleared from that area by Korean National Police,&#8221; he said.