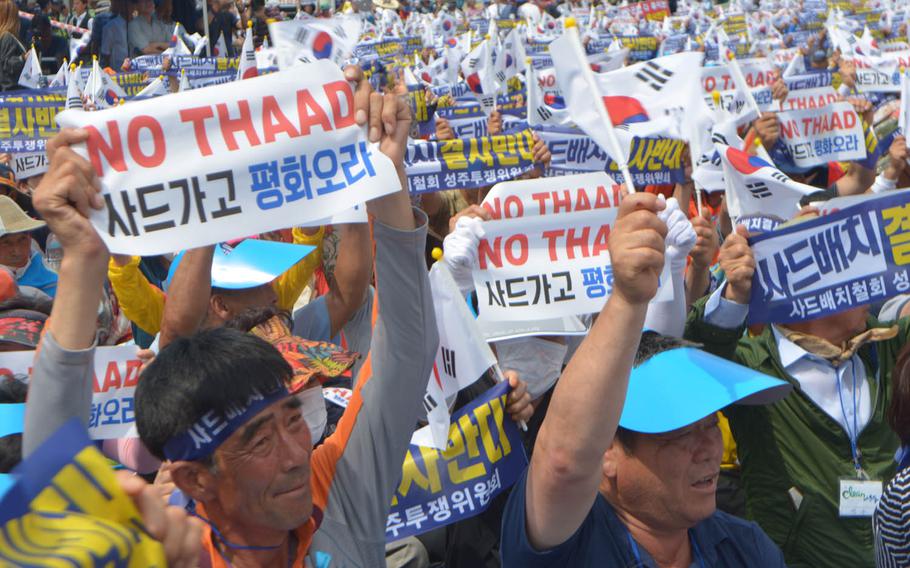 Buy Photo
About 2,000 people rallied outside the main train station in Seoul, South Korea, Thursday, July 21, 2016. Wearing yellow capes and waving banners that said "No THAAD," they called on the government to reverse its decision to deploy the Terminal High-Altitude Area Defense system in Seongju. (Kim Gamel/Stars and Stripes)

SEOUL, South Korea — South Korea’s president defended her plan to deploy an advanced U.S. missile defense system on the peninsula, saying it was “inevitable” and that calls to scrap it could play into the North’s hands.

President Park Geun-hye spoke to the National Security Council as protests continued against the U.S.-South Korean decision to station a Terminal High-Altitude Area Defense system, known as THAAD, in the southeastern region of Seongju.

Park insisted the anti-missile battery is the best protection against a growing military threat from North Korea, which test-fired three more ballistic missiles on Tuesday.

She called on opposition groups and others to unite behind the decision, saying she won’t bow to “criticism and resistance,” according to the South’s Yonhap news agency.

“The government has made the decision to deploy THAAD as it judged that the deployment was the best way to protect the nation and the people from North Korea’s threats,” she was quoted as saying.

“If we become divided over the inevitable choice to protect the nation and people’s lives, and there is further confusion, we could wind up going in the direction that North Korea may want,” she added.

Protesters, especially residents of the farming region of Seongju, fear the system’s powerful radar will be harmful to their health as well as the environment and the economy despite insistence by U.S. and South Korean officials that it is safe. Many also accuse the government of a lack of transparency in making the decision.

About 2,000 people, including many bused in from Seongju, rallied outside the main train station in the capital, Seoul, on Thursday. Wearing yellow capes and waving banners that said “No THAAD,” they called on the government to reverse its decision. Many protesters refused to talk to the media.

A small group of THAAD supporters gathered nearby. “This is very important for the national security,” said Jaechul Ahn, chairman of the World Peace Freedom United group. “We should know that North Korea never changes their goal of the colonization of the whole peninsula.”

North Korea said on Wednesday it had conducted a ballistic-missile test that was practice for pre-emptive strikes against South Korean ports and airfields used by the U.S. military. It did not give a date, but that was widely believed to be a reference to Tuesday’s missile launches, which South Korea’s military said had a range that put them in reach of any target in the country.

Tensions have been rising since the North staged its fourth nuclear test in January, followed by a long-range rocket launch and a series of other missile tests despite a fresh round of toughened U.N. sanctions.

Park said North Korea could stage more provocations, including possibly another nuclear test or a cyberattack, at any time. She also accused the North of putting more military equipment near the land and sea borders that divide the peninsula, which remains technically at war since the 1950-53 conflict ended in an armistice instead of a peace treaty.

The U.S. has about 28,500 servicemembers stationed in the South.