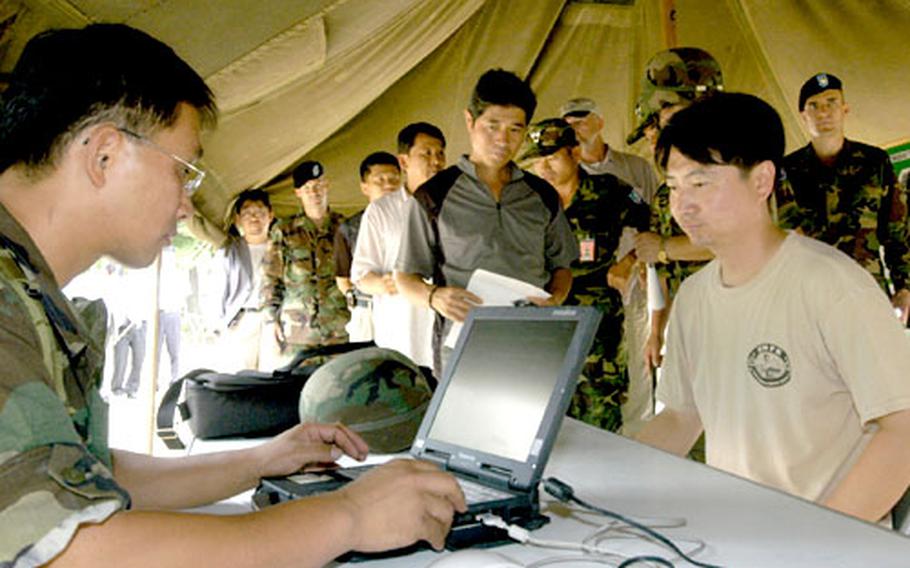 The U.S. Army&#8217;s noncombatant South Korean labor troops are undergoing the annual training exercise this month that drills them in what to do should their units mobilize for war.

In wartime, the Korean Service Corps Battalion&#8217;s strength would swell from its current 2,200 to 3,300, officials said. All unarmed noncombatants, they would help dig fighting positions, recover bodies, haul supplies, drive ambulances and perform many other battlefield support jobs.

In peacetime, KSC personnel serve as drivers, carpenters, mechanics and in other jobs important to day-to-day upkeep of U.S. military installations.

To keep rehearsed in what to do if war ever broke out, KSC officials said, the battalion is putting three of its four companies through three-day mobilization exercises in their respective geographic areas. A fourth underwent its exercise in February.

If war erupts and South Korea&#8217;s government announces a military call-up, KSC cadres &#8212; about 50 in each locale &#8212; would quickly convert a public school in their locale into a mobilization station where workers from their region would report for duty.

They&#8217;d see that tents and processing stations are set up and staffed and radios and phones installed. They&#8217;d keep in close touch with local Korean school and government officials helping the mobilization effort.

&#8220;The purpose is to basically improve the mobilization station operations &#8230; the cadre that would run that operation,&#8221; said Lt. Col. Emmet C. Harleston, KSC battalion commander.

Once the stations were operational, arriving workers would be given a physical exam and issued identification tags, a gas mask and field gear. Basic information on each person would be entered into a computer network.

&#8220;I went through last week and it took me 30 minutes,&#8221; said Sgt. Maj. Henry Garrett, the battalion&#8217;s sergeant major. The troops also would receive some training at the mobilization site, then be moved to wherever they were needed, officers have said.

In Pyongtaek, the KSC exercise was Aug. 4 to Aug. 6 at the Pyongil Elementary School.

And in Pusan last February, the KSC company carried out its exercise Feb. 25 to Feb. 26 at the Yonji Elementary School.

Battalion officials have begun weighing adjustments to future exercises to make them more realistic, said Garrett. &#8220;The training is good now, it&#8217;s effective, but we want to enhance it,&#8221; he said.