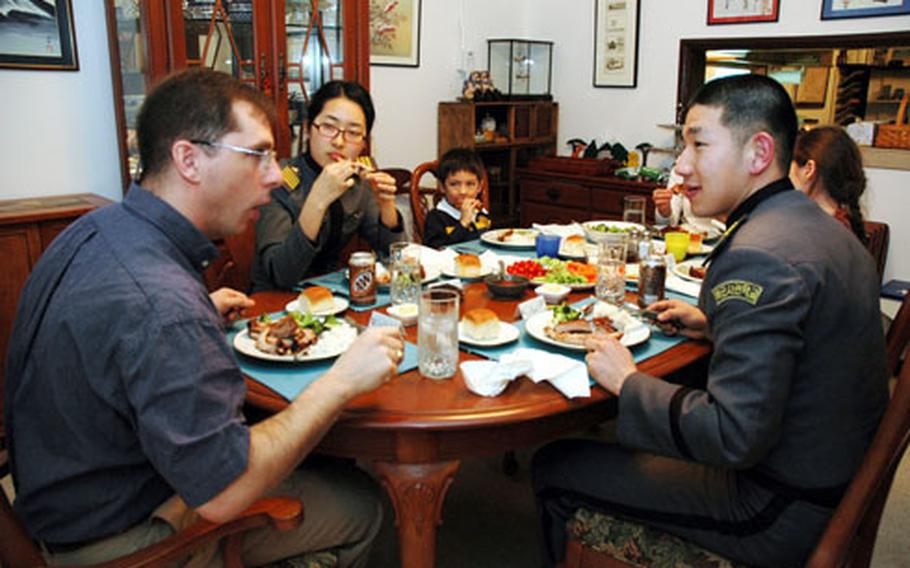 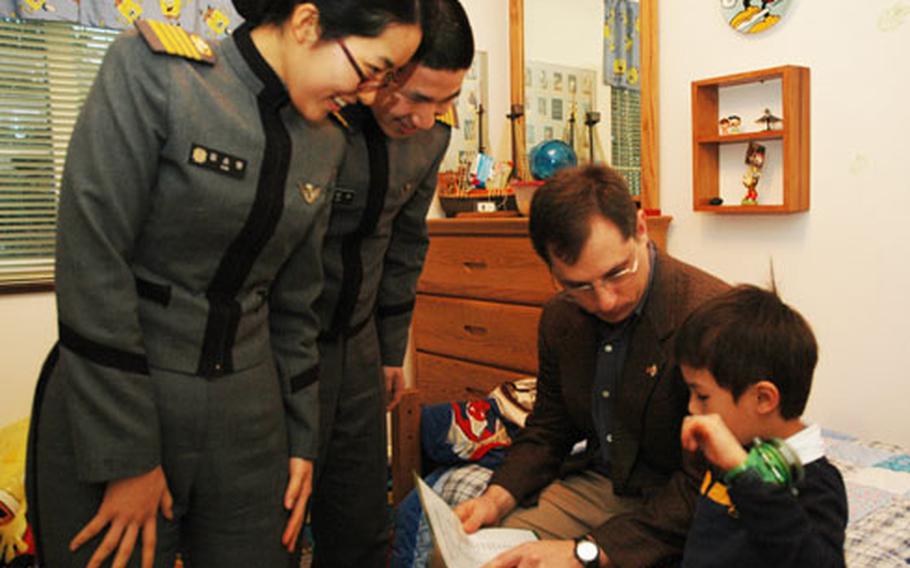 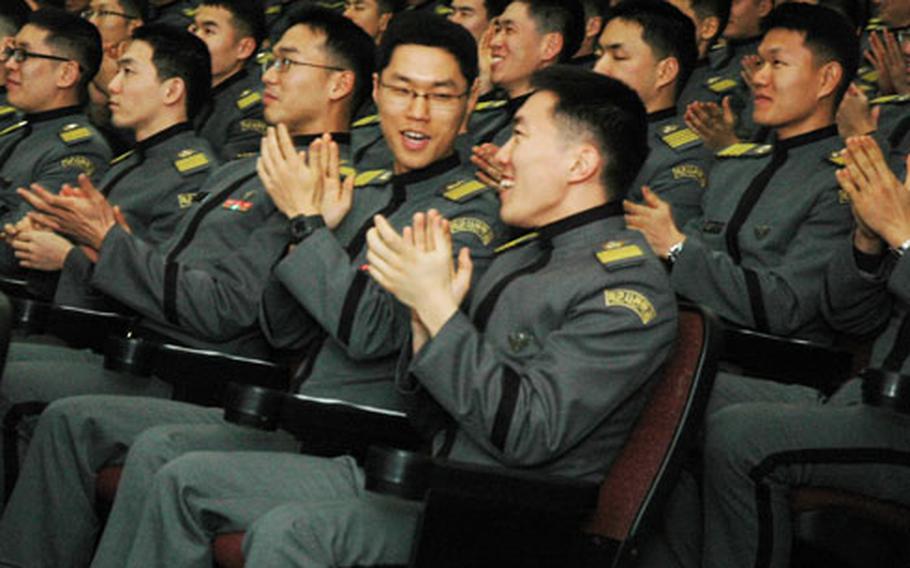 Now Kim, 22, is one of 20 female cadets out of about 190 who will graduate next month from the Korean Military Academy in Seoul.

Adjusting to the nearly all-male environment was easy for Kim, who described herself as a noisy kid who used to bully other neighborhood children. The hardest part, the economics major said, was meeting the physical strength requirements, which are almost equal to those for males.

"I feel so proud of myself to finish the academy," Kim said. "It was a great honor."

Kim and the entire senior class visited Yongsan Garrison this week, a traditional event before they graduate next month.

The class received a briefing about the U.S. and South Korean joint command, ate dinner with U.S. servicemembers and their families, and listened to U.S. Forces Korea commander Gen. Walter Sharp talk about the lessons he learned at the U.S. Military Academy at West Point.

Sharp told the Korean cadets he married three days after his graduation in 1974. And, because the U.S. cadets earned a two-month leave before taking their first commissions, "I had a 57-day honeymoon, which was very nice," Sharp said to cheers and laughter.

Sharp also thanked the cadets for considering the military as a career and for adding to the service of recent generations.

"I really admire your dedication," he told the graduating seniors in Balboni Theater on Tuesday afternoon. "You are keenly aware of your military history. &#8230; You continue that tradition by answering your country&#8217;s call."

Later in the day, the cadets had dinner in American homes. Kim and a classmate, Jun Myung-ho, ate barbecued ribs, rice, broccoli and ice cream with Air Force Lt. Col. Scott Maskery and his family on Yongsan.

"Eat as much as you want," said Maskery, a graduate of The Citadel. "I know cadets are always hungry."

Maskery said he works closely with South Korean military academy graduates in his job with USFK, which involves planning the wartime command transfer from the United States to South Korea three years from now.

Jun, whose father spent his career in the South Korean army, said he plans to follow in his father&#8217;s footsteps. She was in high school in 2002 when two Korean girls were struck and killed by a U.S. military vehicle, and she remembers the national mourning and candlelight vigils that followed.

"Now I see [USFK troops] as our companions helping and fighting for defending our nation," Kim said Tuesday evening. "Studying in the military academy made me think very deeply about their role in Korea."

Earlier in the day, a cadet asked Sharp how they should handle those conscripts who do not necessarily want to be soldiers. South Korea requires males to serve 26 months in the military. The cadet reminded Sharp that his early military days reflected the same mix, commissioned officers and drafted troops fighting in Vietnam.

"I was a platoon leader with many soldiers who did not volunteer to be in the military," Sharp said.

He encouraged the graduates to trust their colleagues and to trust themselves. Above all else, he said, be positive and have fun.

"Trust your leadership," he said. "Go out and take care of those great troops."