S. Korean cab drivers back behind the wheel in Areas I and II 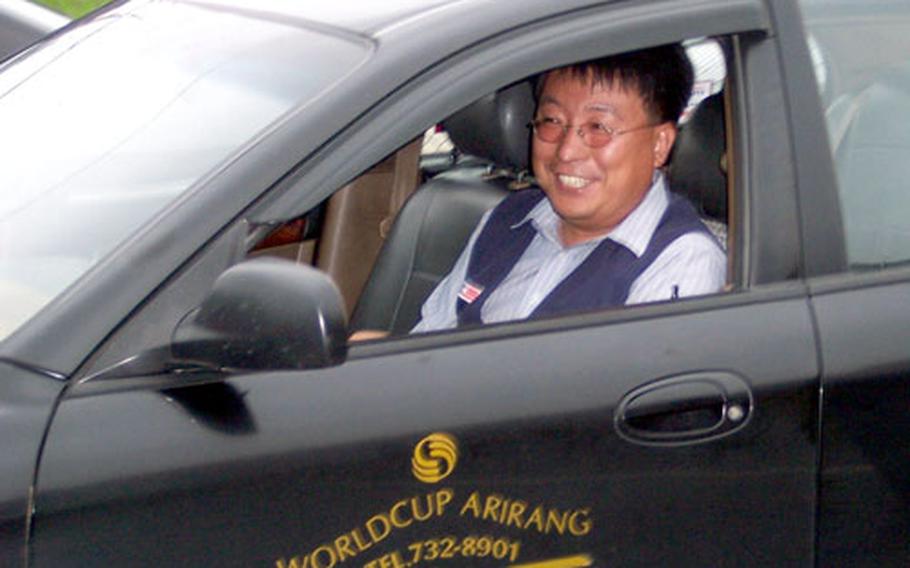 A happy cabbie waits at the new taxi terminal near the commissary on Camp Red Cloud on Friday afternoon. Drivers returned to work Friday after a two-week strike for better wages. (Erik Slavin / S&S)

YONGSAN GARRISON, South Korea &#8212; Dozens of black taxi cabs with illuminated lights on their roofs began lining up in Area I and Area II on Friday morning, a black-and-white signal to the end of a 13-day strike.

But the outcome for Worldcup Arirang Tourism Co. and its drivers remained gray Friday.

After almost two weeks of rallying, closed-door late-night negotiating and asking forgiveness from customers stuck without rides in lashing rains, neither the company nor the union claimed victory.

The 270 union drivers got a small monthly raise and $105 in one-time bonuses, a far cry from their original demand of $105 per month, the union president said. Arirang got its drivers back, but its contract with the Army and Air Force Exchange Service still is in jeopardy, both Arirang and AAFES officials said Friday.

Betty O&#8217;Brien, AAFES Area II general manager, said late Friday morning she was glad the strike ended. But she also said AAFES is &#8220;definitely still looking at options. We want to make sure that this important service is continued without interruption.&#8221;

AAFES got word earlier last week the strike was over but that news proved false, said O&#8217;Brien, Ahn and union president Shim Woo-chang.

On Tuesday, the union and Arirang verbally agreed to increase the drivers&#8217; monthly salaries by 1,000 won (about $1.05) for every year with the cab company. But the union rejected the offer and Ahn told AAFES on Wednesday the strike continued.

Before the strike, each driver made between $1,260 and $1,363 a month, including regular salary, bonuses, overtime and other stipends, Shim said. Ahn, the Arirang executive, estimated the monthly income closer to $1,500, including tips.

Ahn said he planned no taxi rate increases because of the strike and none of the drivers was fired, but the dollar&#8217;s fall against the won has left his company struggling to stay afloat. On Friday, the rate hovered at 950 won to $1, meaning buying a 1,000-won note cost about $1.05.

Ahn said he would hold back on making suggestions to AAFES about changing the taxi service, as he&#8217;d planned earlier last week. His main concern on Friday, he said, was to re-establish service and, again, apologize for the past two weeks.

Shim, the union president, had similar words: &#8220;We are trying our best to provide better quality service to our customers, USFK personnel.&#8221;