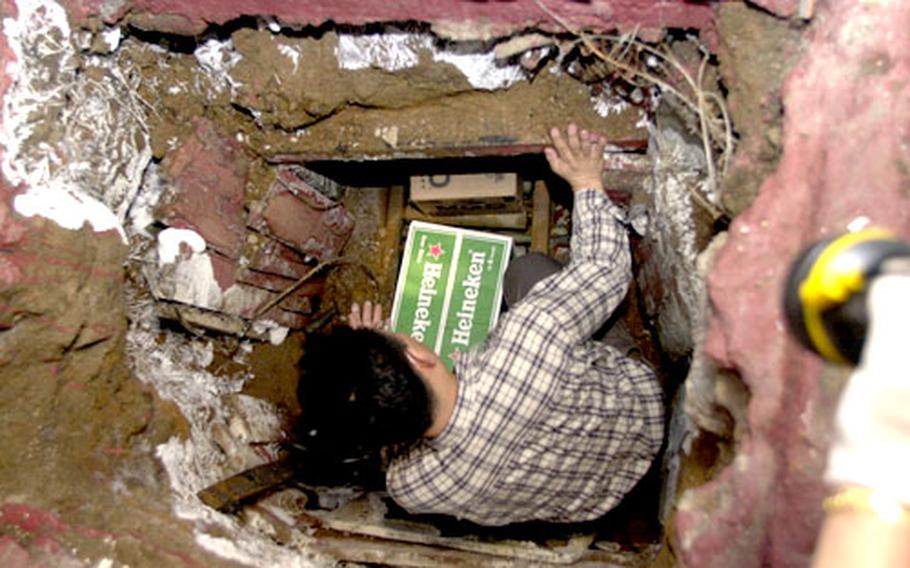 In September, a South Korean customs agent stands in a tunnel that smugglers used to move 62,000 cases of wine and beer from a Hannam Village storage container to a fake storefront off-base. (Joseph Giordono / S&S file photo)

SEOUL &#8212; A South Korean court has sentenced the former manager of a small Army and Air Force Exchange Services shoppette and a South Korean businessman to three years in prison for smuggling thousands of cases of beer and wine through an underground tunnel to a U.S. housing compound.

The Seoul District court also ordered the men, identified only by their surnames Song and Lee, to pay $1.6 million in fines in a ruling handed down late Saturday, court officials said.

Presiding Judge Hwang Han-shik said the &#8220;stern punishment&#8221; was necessary because the amount of planning involved and the amount of alcohol smuggled both were large.

South Korean customs officials arrested the men in September after being tipped off to their scheme, which involved digging a 60-foot tunnel under the perimeter wall of Hannam Village, a military housing compound in Seoul.

Over two years, the pair smuggled some 62,000 cases of wine and beer, officials said, netting an estimated $2 million reselling the goods on the black market.

Customs officials also have asked prosecutors to investigate up to 25 other individuals involved in the smuggling operation.

The pair originally began by smuggling smaller quantities by simply putting cases of beer and wine into vehicles and driving it off base. The pair later &#8220;got bold and thought they came up with a better idea,&#8221; a customs investigator said after the arrests.

The tunnel was built on a downward angle and lined at the bottom with a rail system that would allow the men to push cases of alcohol easily from one end to the other. During the day, Lee would run the coffee shop as normal; at night, he would back his car into the wide storefront and load the cases into the car&#8217;s trunk from a hole in the store&#8217;s floor.

Black marketing of base goods long has been a problem in South Korea. Authorized patrons of base stores are issued a Ration Control Plate, a plastic card that helps officials track purchases of goods and limits the amount of certain items &#8212; such as gasoline and alcohol &#8212; that any one person can buy.