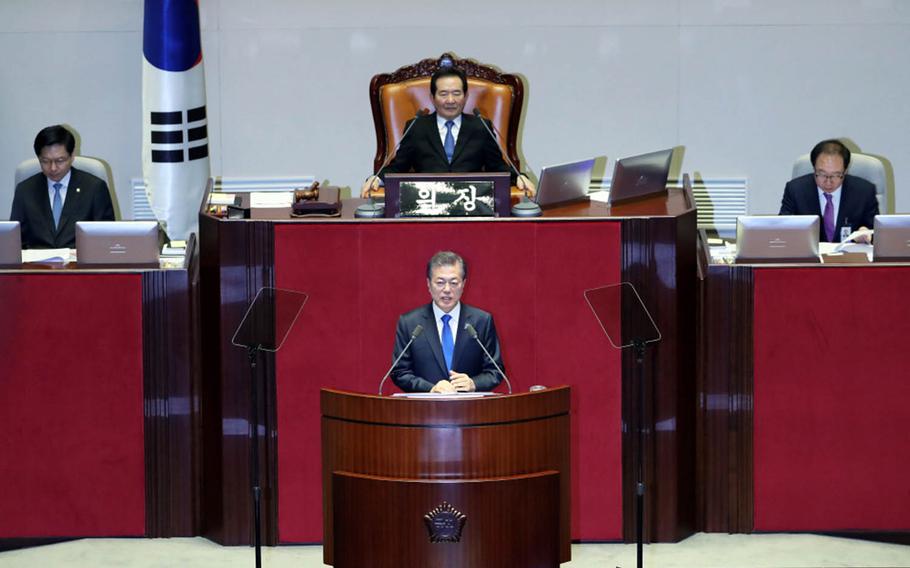 SEOUL, South Korea — President Moon Jae-in said Wednesday that South Korea won’t seek nuclear weapons despite opposition calls to do so in the face of a growing threat from the North. But he promised a “stern response” to any provocation from the communist state.

Moon outlined his policy in a televised national address to announce his budget for the upcoming year, which includes what he called the highest rise in defense spending since 2009.

The liberal leader — who took office May 10 after his conservative predecessor was ousted in a corruption and influence-peddling scandal — noted the two Koreas have signed a declaration to denuclearize the peninsula.

That “makes it impossible to accept or acknowledge North Korea as a nuclear power. We will not develop or possess nuclear weapons either,” he said.

The debate over the issue is not new, but proponents have gained momentum in recent months as Pyongyang has made several advances in its weapons programs and conducted its sixth and most powerful nuclear test on Sept. 3. The progress has come despite several rounds of punishing U.N. economic sanctions against Pyongyang.

Opposition lawmakers led by Hong Joon-pyo of the conservative Liberty Korea Party have called for the redeployment of U.S. tactical nuclear weapons, which were removed from the divided peninsula in 1991.

Hong traveled to Washington last month to lobby for his cause, arguing it would even the playing field against a nuclear-armed North. Recent polls also have shown a majority of South Koreans support the idea.

Critics have said the presence of tactical nuclear warheads on the peninsula is unnecessary since South Korea is protected under the U.S. nuclear umbrella and could fuel a regional arms race.

The South also ratified the Nuclear Non-Proliferation Treaty in 1975.

President Donald Trump, who will visit South Korea Nov. 7-8 as part of his first official trip to the Asia-Pacific region, said during the campaign that he may be open to the possibility of U.S. allies like South Korea and Japan acquiring their own nuclear weapons to improve their defense capabilities.

But he hasn’t made his stance clear since his election.

“In terms of tactical nukes on the peninsula, I want to remind everyone that unlike the [Kim Jong Un] regime in North Korea, our combined effort is to denuclearize the peninsula,” he said, standing next to his South Korean counterpart.

“And I would only add to that, we have a global strategic capability that is a deterrent, and I’ll just tell you that this subject has not been broached to me by the [South Korean] government.”

Moon has long opposed the reintroduction of nuclear weapons in South Korea, fearing it would upset his goal of pursuing a peaceful resolution with the North.

“Sanctions and pressure are the means to guide the North toward making the right choice and coming to the negotiating table,” he said Wednesday.

Moon has made strengthening the military a cornerstone of his administration and drastically increased defense spending to about 10 percent of his $384 billion budget proposal for 2018.

He also said rank-and-file salaries will increase, with sergeants seeing a monthly pay rise from about $190 to $362.

Moon vowed to meet any provocation from the North with a “stern response.”

“To this end, we must secure overwhelming military superiority,” he said. “We will also work proactively with the international community, based on the strong Korea-U.S. alliance.”

The United States and South Korea have been allies since the 1950-53 Korean War pitted them against the communist-backed North. That conflict ended in an armistice instead of a peace treaty, leaving the two sides technically in a state of war.

About 28,500 U.S. servicemembers are stationed in South Korea.