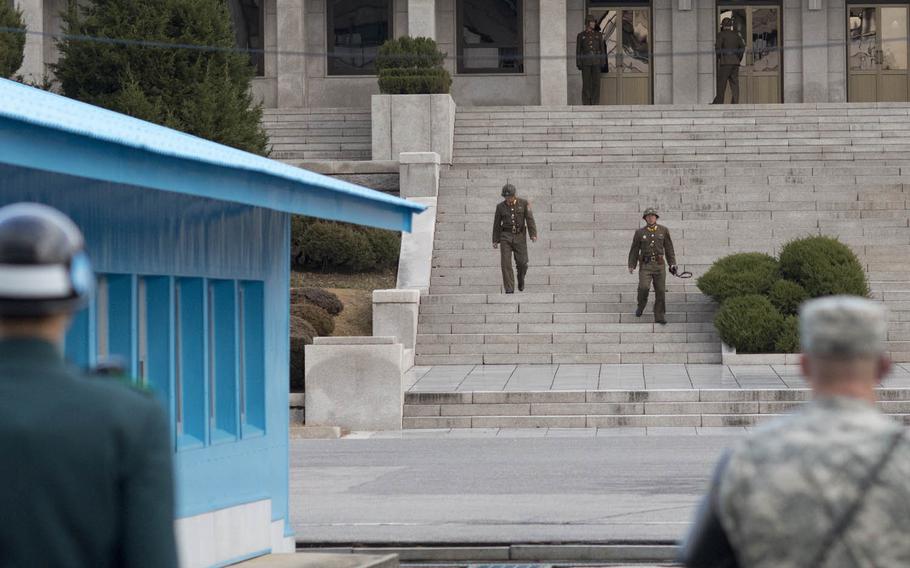 “North Korea will pay a harsh price proportionate to the provocation that North Korea made,” Maj. Gen. Koo Hong-mo, director of operations of the South’s Joint Chiefs of Staff, said at a press briefing Monday. “As previously warned on many occasions, our military will make North Korea pay the equally pitiless penalty for their provocations,” he said.

The 1st Infantry Division soldiers were conducting a morning patrol south of the Demilitarized Zone near Paju on Aug. 4 when three land mines exploded. Their injuries were not life-threatening, but one soldier lost both legs, one below the knee and one above the knee, and the other had a foot amputated, according to South Korea’s Ministry of National Defense.

An unknown number of North Korean troops are believed to have crossed the border between July 24 and Aug. 3 to plant the mines, an MND spokesman said.

Officials do not know if other mines were planted. A million or more decades-old mines are believed to be buried throughout the 160-mile-long, 2.5-mile-wide DMZ as a deterrent to land attacks.

In the hours after the blasts, South Korean officials said there was no possibility of North Korean involvement, and recent heavy rains might have displaced the land mines.

Still, a special investigation team from the U.N. Command Military Armistice Commission was ordered by UNC commander Gen. Curtis Scaparrotti to examine the incident. The team included members from South Korea, the U.S., New Zealand and Colombia, and was observed by Swiss and Swedish members of the Neutral Nations Supervisory Commission.

“Additionally, the investigation determined that the devices were recently emplaced, and ruled out the possibility that these were legacy land mines which had drifted from their original placements due to rain or shifting soil,” said a U.N. Command statement issued Monday.

Several factors — including terrain slope, fences and how often the route is patrolled — ruled out the possibility that the mines had drifted from erosion, flooding or shifting soil, the investigation found. In planting the mines, North Korea had violated the 1953 armistice that ended the Korean conflict, according the U.N. Command, which also called for general officer level dialogue with the North Korean military.

Because the Korean War did not end with a peace treaty, the two Koreas remain technically at war. The incident marks the North’s first direct attack on South Korea since the shelling of the civilian-populated Yeonpyeong Island and the sinking of the Cheonan warship, both in 2010.

South Korea on Monday said it would hold the North accountable for military provocations, and urged it to apologize and punish those responsible for the incident.

As part of that retaliation, the South began blasting propaganda broadcasts across the border on Monday — for the first time in 11 years, according to a report from The Associated Press.

South Korea conducted the broadcasts in the western and center portions of the border, said Defense Ministry spokesman Kim Min-seok. He said the broadcasts emphasized that the mine explosions were a provocation by the North.

The heightened tensions between the countries comes as the U.S. and South Korea prepare for the annual Ulchi Freedom Guardian exercise later this month. The computer simulation drill is set for Aug. 17-28, according to South Korean military officials, and the war games typically prompt denouncements and threats from the North.

The land mine attacks have raised questions about security along the tense border and how North Korean troops were able to get past an array of barriers — from barbed wire fences and foot patrols — meant to protect against North Korean incursion. The U.N. Command did not respond to questions about how the North was able to plant the mines or whether it may have planted others in the southern portion of the DMZ.

“(South Korean) and U.S. military forces remain well poised and will continue our close coordination while conducting surveillance and patrolling operations in accordance with our established procedures along the DMZ,” the command said when asked about U.S. troop safety and whether forces have been placed on heightened alert.

South Korea plans to add more security equipment along the border to prevent future incursions, said a MND spokesman, who did not provide details.

North Korean military officials may have planted the mines as part of a “loyalty competition” among the country’s elites to gain favor with Kim Jong Un, said Kim Jin Moo, a senior researcher at the Korea Institute for Defense Analyses.

“North Korea has given a lot of threatening messages to South Korea, and it was just words,” he said. “But this was more than words.”

Though security along the border is generally strong, the mines point to a “weak point” between areas protected by physical barriers and those monitored by guard posts, said Yang Uk, senior research fellow at Korea Defense and Security Forum.

The North likely planned the attack “to throw South Korean troops into confusion” and to generate anger among South Koreans toward the country’s military.