S. Korea to provide humanitarian aid to North for 1st time since 2015 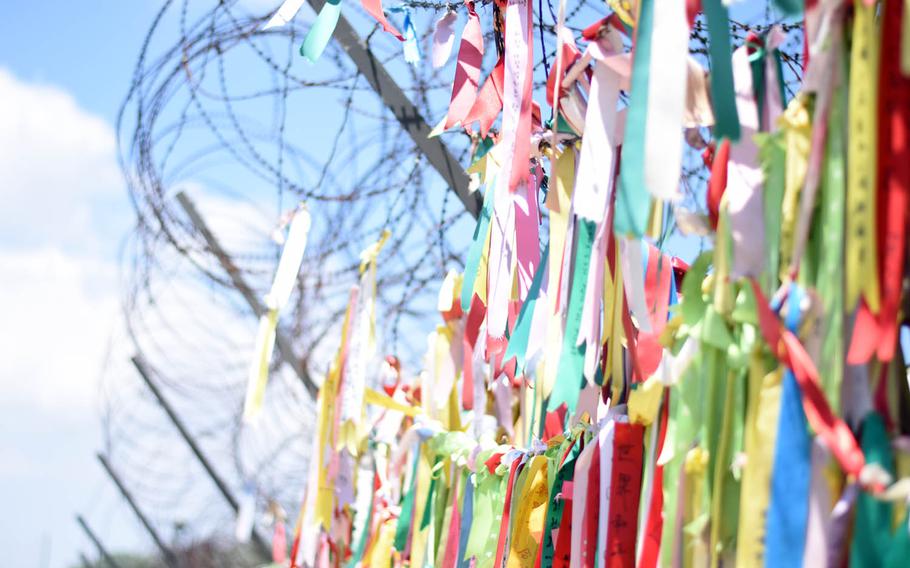 Buddhist prayer ribbons hang from a security fence in Paju, South Korea, near the Demilitarized Zone. (Aaron Kidd/Stars and Stripes)

It would be the first time the South Korean government has provided aid to North Korea in nearly two years, although the Unification Ministry did not set a time for the distribution as tensions with the North spike.

The government will decide later “the timing and scale of the aid provision by comprehensively considering overall circumstances including the situation of inter-Korean relations,” the ministry said in a statement. It said the decision was made by a panel of ministry and civilian experts.

The tentative decision reflects the delicate balance President Moon Jae-in faces as he tries to pursue a softer approach toward the North than his conservative predecessor even as Pyongyang rebuffs his efforts and defiantly persists with nuclear and missile tests.

South Korea under ex-President Park Geun-hye suspended aid and exchanges with the North after it conducted its fourth nuclear test in January 2016, setting off the current crisis. North Korea has since carried out two other nuclear tests and launched dozens of missiles, including two intercontinental ballistic missiles in July.

Critics argue that the resumption of aid will offset the effects of punishing economic sanctions and send mixed messages amid diplomatic pressure aimed at forcing the North to return to the negotiating table.

“Of course humanitarian support is necessary, but the timing is wrong,” said Som Kum Ju, spokeswoman for the opposition People’s Party.

“Tension on the Korean Peninsula is skyrocketing” due to North Korea’s nuclear and missile testing programs, she said. “Nothing is more important than consistency and international cooperation in relations with North Korea.”

But Moon, a liberal leader who has hardened his stance on the political front since taking office on May 10, insists humanitarian issues should be handled separately.

“We expect that the humanitarian situation of vulnerable social groups in North Korea to be improved with this aid by preventing diseases of North Korean children, treating malnourished children, and enhancing nutrition of pregnant women,” the ministry said in a statement.

The ministry said the aid would be monitored and didn’t include cash so “there’s no possibility” it could be misused for other purposes, addressing concerns that humanitarian assistance may be used by the North Korean military instead of vulnerable populations.

The two agreed that humanitarian aid should be handled separately from the political situation, but Kang said her government also needed to take into consideration the state of inter-Korean relations and North Korea’s nuclear and missile provocations, UNICEF said.

The agency this week said that about 200,000 children in the North are affected by acute malnutrition and 350,000 younger than 5 remain unvaccinated against life-threatening diseases.

“The children of [North Korea] have long been invisible to much of the world, but the challenges they face are all too real — and the need to reach them is urgent,” UNICEF’s regional director Karin Hulshof was quoted as saying.