S. Korea to double number of propaganda loudspeakers at DMZ 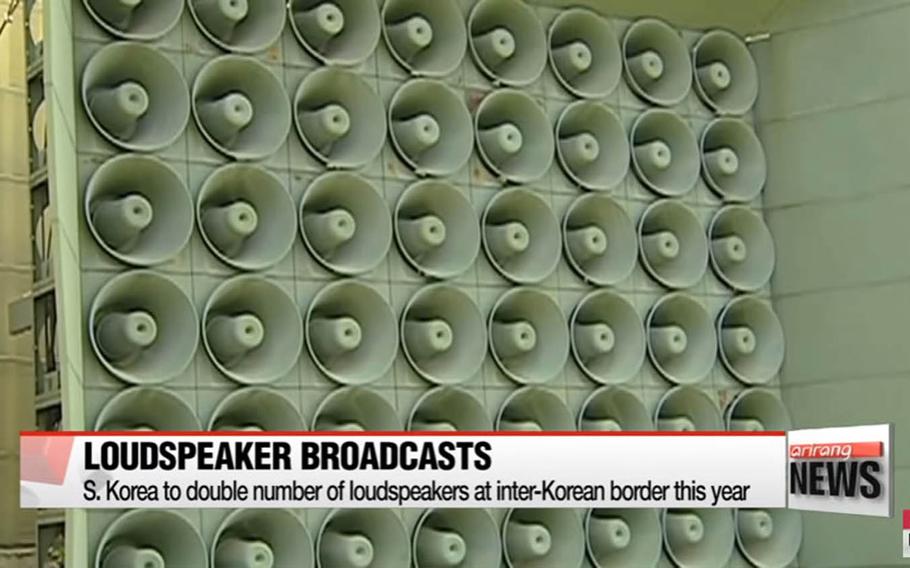 South Korea plans to step up its barrage of anti-Pyongyang propaganda and pop music into the North by doubling the number of loudspeakers at the Demilitarized Zone by the end of the year, South Korean media reports say. (Screenshot from Arirang News)

South Korea plans to step up its barrage of anti-Pyongyang propaganda and pop music by doubling the number of loudspeakers at the Demilitarized Zone by the end of the year, according to South Korean media reports.

“We will make more efforts to erode the morale of the North’s troops at the frontline and deliver information [about the outside world] to civilians there,” a military official told the South’s Yonhap News agency.

In an effort to drown out the North’s own propaganda blasts, future broadcasts will be louder and longer than in the past and contain harsher criticism of North Korean leader Kim Jong Un, Arirang News reported Wednesday.

There are now 15 loudspeakers — both fixed and moveable — on the south side of the DMZ with a range of about 6 miles, the report said.

The increase is also aimed at punishing Pyongyang for recent missile launches, the military official told Yonhap. On June 22, the North fired a Musudan missile that reportedly flew about 250 miles and reached an altitude of between 620 and 880 miles after it was fired over the Sea of Japan, raising concerns that North Korea is making progress toward its stated goal of developing a nuclear weapon that can reach the U.S. mainland. Five previous efforts to launch the midrange missile had failed.

The South restarted its broadcasts in August after a land mine reportedly planted by the North maimed two South Korean soldiers patrolling the heavily fortified border. An agreement between the two countries to ease heightened tensions included a halt to the propaganda blasts, which resumed after the North carried out its fourth underground nuclear test in January. The North then set up its own loudspeaker propaganda broadcasts, and both sides have sent balloons over the border to drop propaganda leaflets.