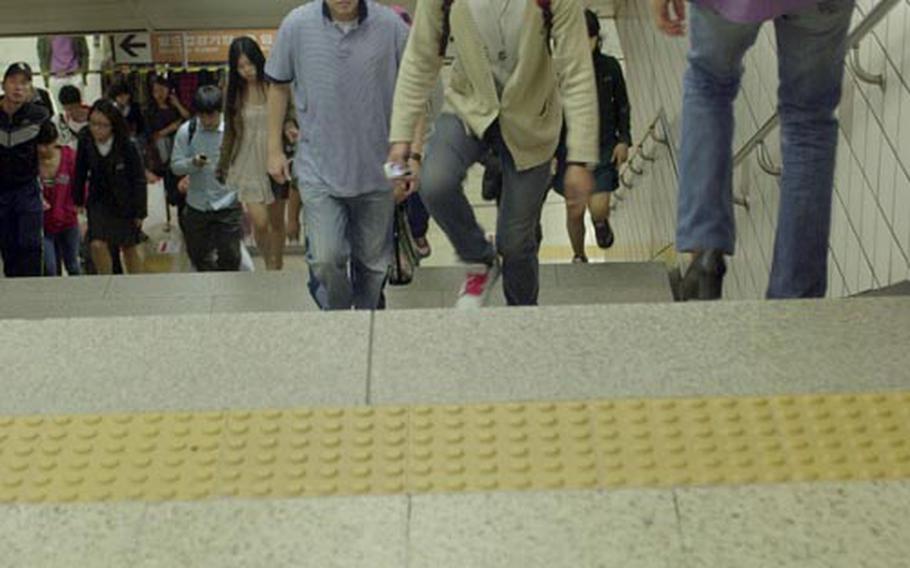 Seoul government officials say it is going to take some time for South Koreans to get in the habit of keeping to the right, as seen at the Itaewon subway station. On Oct. 1, Seoul began a campaign to get everyone to walk on the right. Signs are taped to the floor at the subway station as part of the campaign. (Jon Rabiroff / S&S)

SEOUL &#8212; Officials hope a campaign to get people to walk on the right will change a perception many U.S. servicemembers and other foreigners have &#8212; that Koreans are rude.

Shin Yong-mok, a senior official with the Seoul Metropolitan Government&#8217;s transportation bureau, said one of the most common complaints expatriates have is that Koreans routinely bump into them and walk away without apologizing.

For that and other reasons, he said, a campaign began Oct. 1 in Seoul to get Koreans to keep to the right when walking in public. Plans call for the effort to be expanded nationwide next year.

"No one likes being bumped," Shin said. "That&#8217;s why we are promoting this campaign very hard, to meet the global standard."

The bump-and-shun phenomenon is so common that U.S. military officials routinely warn their personnel that Koreans mean no harm by it.

For example, a video shown during the 8th Army&#8217;s semiannual New Horizons Day cultural training references the bumping and encourages soldiers not to "overreact or take it personally," according to spokesman Maj. Jerome Pionk.

"It is due to the fact that Seoul is massively congested," he said. "There are a lot of people here. Most Koreans don&#8217;t intentionally bump into you. It&#8217;s just part of the culture here. It is what it is."

Still, some find it difficult to overlook. A 2007 blog post titled "Why are Koreans rude?" on ROK Drop (rokdrop.com) &#8212; a Web site geared toward servicemembers &#8212; is still getting responses and has generated about 500 postings to date, many related to the bumping issue.

It will likely take some time before the keep-right campaign and the continuing internationalization of South Korea results in less bumping and more apologies, according to Michael Breen, a longtime journalist and author of "The Koreans."

"For a U.S. soldier here on a tour of duty, who&#8217;s here in January and gone in December, they are not going to notice a change," he said. "But someone comparing their first and third tours in Korea, they are going to notice changes and this will be one of them."

Breen said the bump-and-shun mentality is rooted in the fact that Koreans have traditionally lived in clusters &#8212; "lots of people crowded into a small space" &#8212; so there is a "traditional acceptance of what, to you and me, is considered an invasion of our space."

Koreans stayed to the right until 1921 when, while under Japanese colonial rule, they were forced to drive and walk on the left, as is still the custom in Japan. After being liberated from Japanese rule, Korean drivers were directed to drive to the right, but walkers still stayed to the left &#8212; which has become a greater issue as South Korea becomes more of an international city with foreign residents and visitors who are in the habit of keeping right.

Thus began the half-million-dollar effort to move South Koreans to the right.

According to Korean media reports, more than 1,000 escalators at Seoul subway stations were changed to accommodate the move, signs and stickers were put up all over the city and stay-right messages will be broadcast on trains.

In justifying the change, government officials have said the vast majority of South Koreans are right-handed, so they are "psychologically prone" to keeping right.

"We believe changing the law to encourage people to walk to the right and think to the right will help promote social order and improve public traffic safety," said Cho Sung-tae, of the Ministry of Land, Transport and Maritime Affairs.

"Above all, we hope that everybody will find a pedestrian-friendly walking environment," he said.

"A 60-year-old habit cannot be easy to break &#8230; overnight or in a few months," Shin said. "We expect it will take a long time, and a steady and strong campaign."