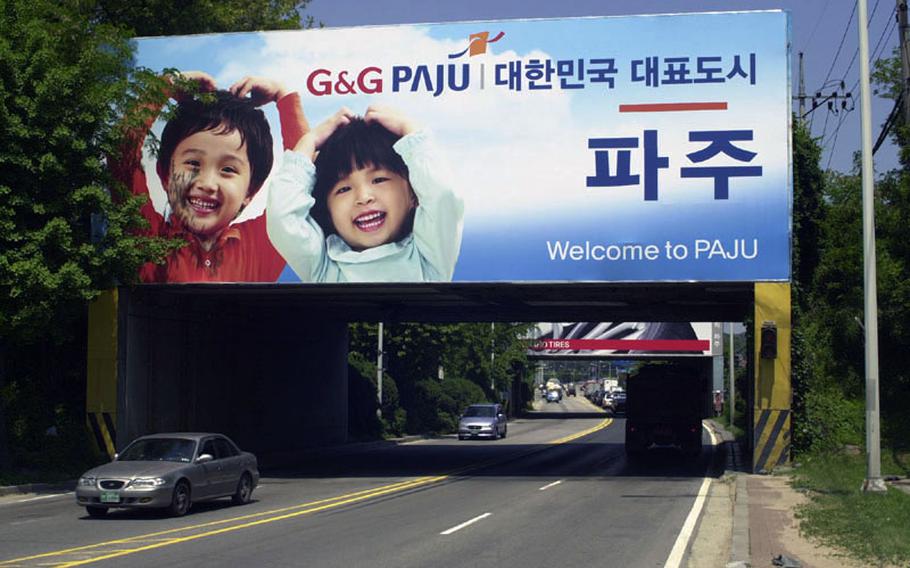 Buy Photo
The smiling children on the billboard belie the fact that the placard is attached to one of two anti-tank barricades on a stretch of road between Seoul and Korea&#39;s Demilitarized Zone. The barricades are designed to be blown up, dropping tons of concrete onto the road below and into the path of any advancing North Korean tanks should hostilities resume on the peninsula. (Jon Rabiroff/Stars and Stripes)

Buy Photo
The smiling children on the billboard belie the fact that the placard is attached to one of two anti-tank barricades on a stretch of road between Seoul and Korea&#39;s Demilitarized Zone. The barricades are designed to be blown up, dropping tons of concrete onto the road below and into the path of any advancing North Korean tanks should hostilities resume on the peninsula. (Jon Rabiroff/Stars and Stripes) 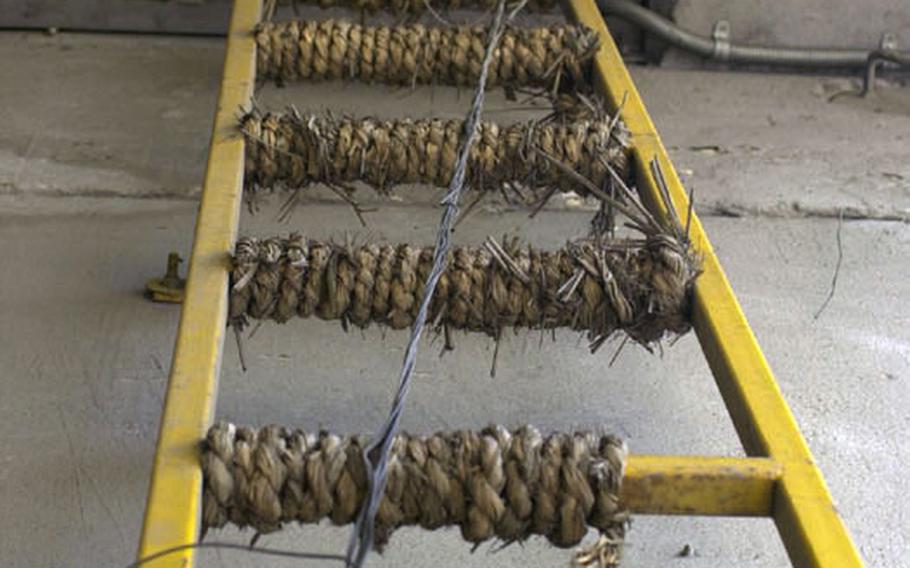 Buy Photo
Many of the anti-tank barricades, or 'rock drops,' that stand over roadways and railways north of Seoul in South Korea are equipped with built-in ladders which would presumably be used to set explosives in the event of a North Korean attack. (Jon Rabiroff/Stars and Stripes) 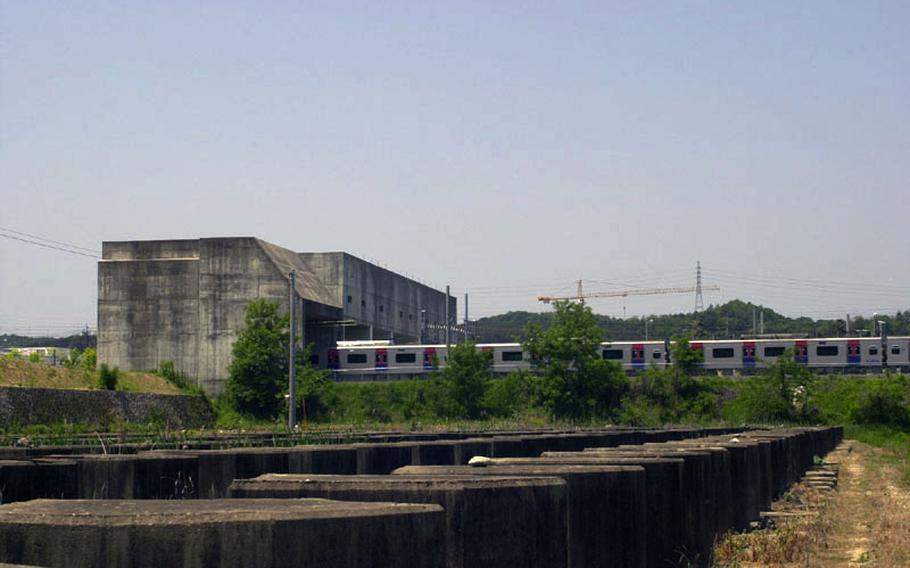 Buy Photo
A train rolls through an anti-tank barricade about 15 miles south of Korea&#39;s Demilitarized Zone. In the event of a North Korean attack, barricades like this are designed to be blown up, dropping tons of concrete on the railways and roads below and into the path of any advancing tanks. In the foreground are concrete pillars, also known as 'dragon&#39;s teeth,' which together with the barricades are meant to slow the advance of North Korean troops in the event hostilities on the peninsula resume. (Jon Rabiroff/Stars and Stripes) 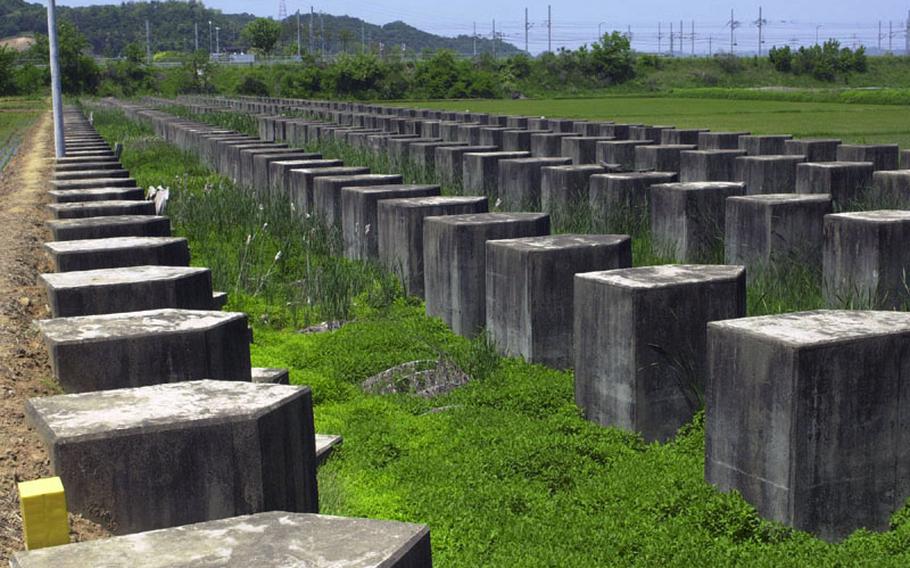 Buy Photo
Rows of concrete pillars, also known as 'dragon&#39;s teeth,' and rice paddies are part of an anti-tank barricade system set up about 15 miles south of Korea&#39;s Demilitarized Zone. The decades-old system was set up to fend off any advance of North Korean troops into South Korea in the event hostilities on the peninsula ever resume. (Jon Rabiroff/Stars and Stripes) 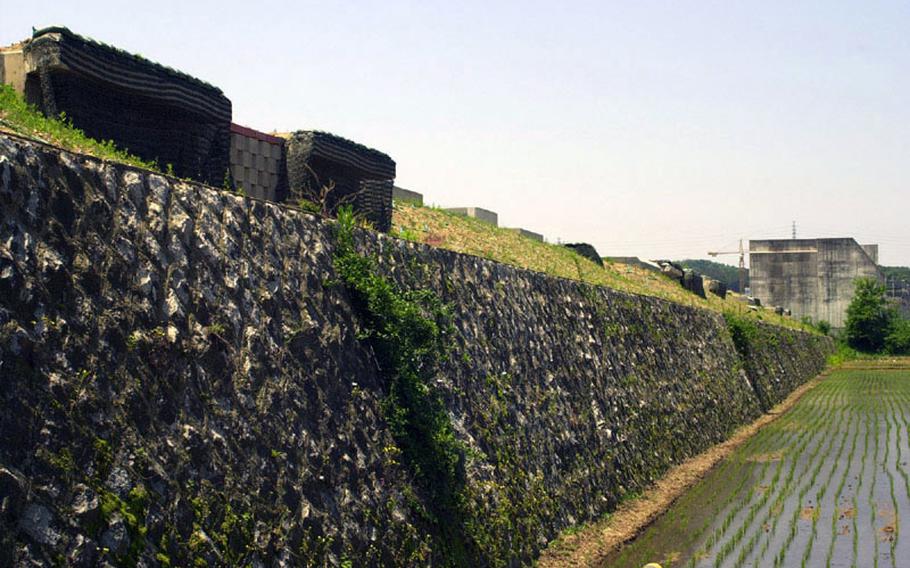 Buy Photo
A bunker is built into the side of an anti-tank barricade system along a road between Seoul and Korea&#39;s Demilitarized Zone. The barricade system is meant to stop or slow the potential advance of North Korean tanks and troops in the event war ever resumes on the peninsula. (Jon Rabiroff/Stars and Stripes) 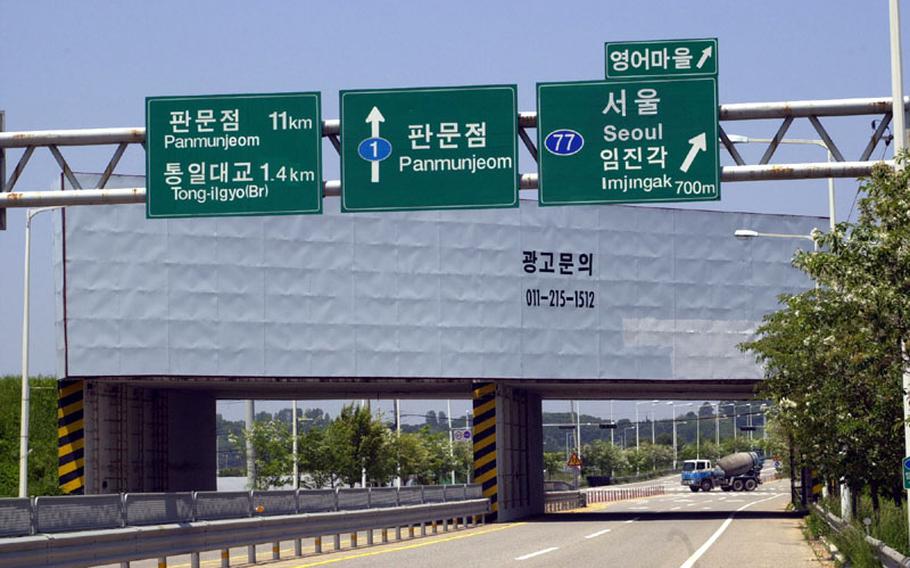 Buy Photo
An anti-tank barricade ia positioned above a road between Panmunjom and Korea&#39;s Demilitarized Zone. The structure would be blown up in the event of a North Korean attack in hopes that the tons of concrete that would fall onto the road would stop or slow the advance of troops and tanks. (Jon Rabiroff/Stars and Stripes) 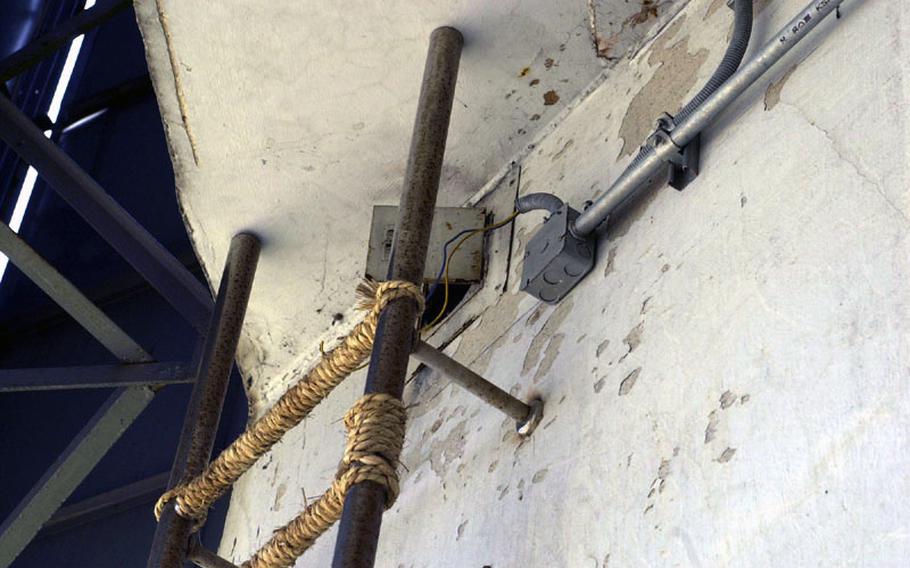 Buy Photo
The wires seen here can be connected in the ceiling of this anti-tank barricade erected over a road between Seoul and Korea&#39;s Demilitarized Zone. The concrete structures are designed to be blown up and into the path of advancing North Korean tanks in the event hostilities ever resume on the peninsula. (Jon Rabiroff/Stars and Stripes)

PAJU, South Korea &mdash; The legacy of the 1950-53 Korean War remains apparent throughout this country, perhaps in no more an imposing fashion than the bulky edifices that resemble overpasses on highways and railways between Seoul and the Demilitarized Zone.

Until a closer look reveals that these are overpasses to nowhere, relatively thin sidewalls holding up massive blocks of concrete, some measuring 20 feet tall and 40 feet deep.

Commonly called &ldquo;rock drops&rdquo; and colloquially described as &ldquo;North Korean speed bumps,&rdquo; the concrete hulks were built in the 1970s and 1980s to be exploded over transportation corridors, with the resulting tons of rubble intended to slow armored columns if there were a ground invasion from the North.

&ldquo;They were designed when the presumed North Korean strategy was a repeat of the Korean War strategy &mdash; a tank-led invasion,&rdquo; said longtime Seoul journalist and author Michael Breen. &ldquo;That strategy is no longer viable for the North.&rdquo;

Whether the rock drops would be used as designed is something neither the U.S. nor South Korean military will discuss. But with both Koreas talking tough in the wake of the South blaming the North for torpedoing a South Korean warship and killing 46 crewmembers, potential war strategies are once again a hot topic on the peninsula.

The rock drops are to South Korea what that flimsy chain lock is to your front door: You trust the deadbolt and key lock will keep out intruders, but if they fail, the chain might buy you a little time to find safety or to grab a weapon before the door gets kicked open.

Combined with natural or man-made barriers on both sides, the rubble from exploded rock drops would force an advancing tank column to try to go over, around or even through the pile with the help of bulldozers, debris-clearing explosives or tank blasts.

Paju is home to one of the more elaborate anti-tank barricade systems, about 15 miles south of the DMZ. There, separate barricades stand over a roadway and set of railroad tracks, connected by a 100-yard man-made hill and wall dotted with bunkers.

Ladders are built into the walls of some barricades, allowing easy access into ceiling hollows of the structures, where in some cases wiring can be seen ready to be hooked up to explosives.

Immediately to the north is a field with a few hundred 3-foot-tall concrete stumps &mdash; known as &ldquo;dragon&rsquo;s teeth&rdquo; &mdash; arranged neatly in five rows that stretch between the roadway and railway.

Built 20 to 30 years ago, the barricades were believed by locals to have outlived their usefulness by 2000 and had become more of an obstruction to development and aesthetics.

In 1999, the South Korean Ministry of National Defense granted requests from a handful of cities to remove some barricades in areas where the military said it could otherwise shore up overall defense capabilities, according to a 2006 New York Times report.

Those barricades came down during a period of relative calm in relations between the two Koreas.

Korea observers say that despite high-tech weaponry such as missiles and precision aerial bombing that the allies would use in any new war, the rock drops and other barricading devices might still prove useful.

That&rsquo;s assuming a North Korean invasion force got through the Demilitarized Zone between the two Koreas, which is &ldquo;mined like hell,&rdquo; said David Garretson, a South Korea professor of international relations at the University of Maryland University College.

Breen said most experts believe that North Korea&rsquo;s strategy, if it were to invade the South, would involve a combination of missiles and long-range artillery firing at Seoul from north of the DMZ, and special forces soldiers dressed in South Korean uniforms infiltrating the South to cause havoc.

Still, there are some unlikely scenarios where the North might gain an early advantage in a new war, Breen said, and the barricades might be needed to slow a ground advance rolling south toward Seoul

&ldquo;I don&rsquo;t think anyone is going to remove [the barricades] anytime soon,&rdquo; he said.

Kim Byungki, an international relations professor at Korea University, said that even if a war somehow got as far as North Korea rolling tanks toward Seoul, the U.S. and South Korea&rsquo;s &ldquo;precision-guided munitions &hellip; have the capability to destroy any oncoming tanks with extreme precision and extreme effectiveness.&rdquo;

Kim said he believes the barricades will remain in place, just in case.

&ldquo;The only certain thing about war is uncertainty,&rdquo; he said.