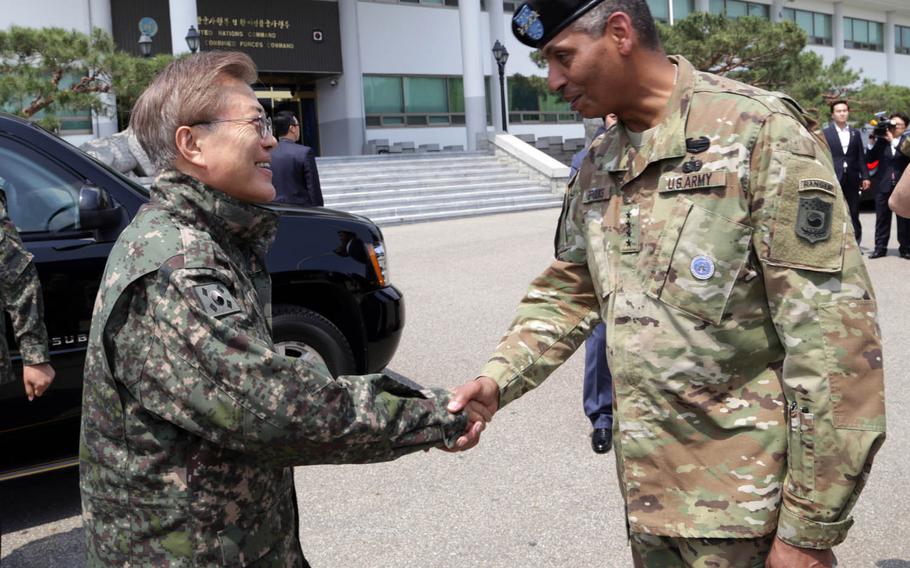 YONGSAN ARMY GARRISON, South Korea — South Korea’s new president called for a stronger alliance with the United States and urged the combined forces to maintain a firm defense posture as they face a growing threat from the North.

“I believe that the security situation on the Korean Peninsula is more dire than ever before,” he said, pointing to a series of missile tests by North Korea this year, including five since he took office on May 10.

Moon said he was especially concerned about the last launch on June 8, when the North fired four surface-to-ship cruise missiles, which he said “constitutes a direct threat to our combined naval forces.”

The meeting occurred amid concerns in Washington that the liberal leader may be less friendly toward the decades-old alliance because he has said he would pursue dialogue and economic engagement with the North.

Moon also suspended the deployment of four more launchers for a controversial U.S. missile defense system known as THAAD pending a full environmental assessment. His administration said the decision was aimed at ensuring transparency and it has no plans to renege on the agreement to station the anti-missile battery on the peninsula.

In his remarks Tuesday, he reiterated his commitment to the alliance, which was forged in the 1950-53 Korean War that ended with an armistice instead of a peace treaty. The U.S. maintains about 28,500 servicemembers in South Korea.

“We must induce North Korea to change its attitude and ultimately we must find a way to fundamentally resolve North Korea’s nuclear and missile threat and maintain peace,” he said. “To this end we must further strengthen the [South Korean]-U.S. alliance and maintain a rock solid combined defense posture.”

Brooks, who is also the head of the United Nations Command and the Combined Forces Command, agreed.

“During this time of heightened tensions it is more important than ever to stand with our Korean brothers,” he said.

Moon was elected in a snap election after his predecessor, Park Geun-hye, was ousted and jailed as part of a corruption and influence-peddling scandal.

Staying true to his reputation as a man of the people, the president waved to onlookers and chatted with South Korean and U.S. soldiers before going into the White House, as the USFK headquarters is known.