S. Korea’s new president ready to talk to US, China and maybe even Pyongyang 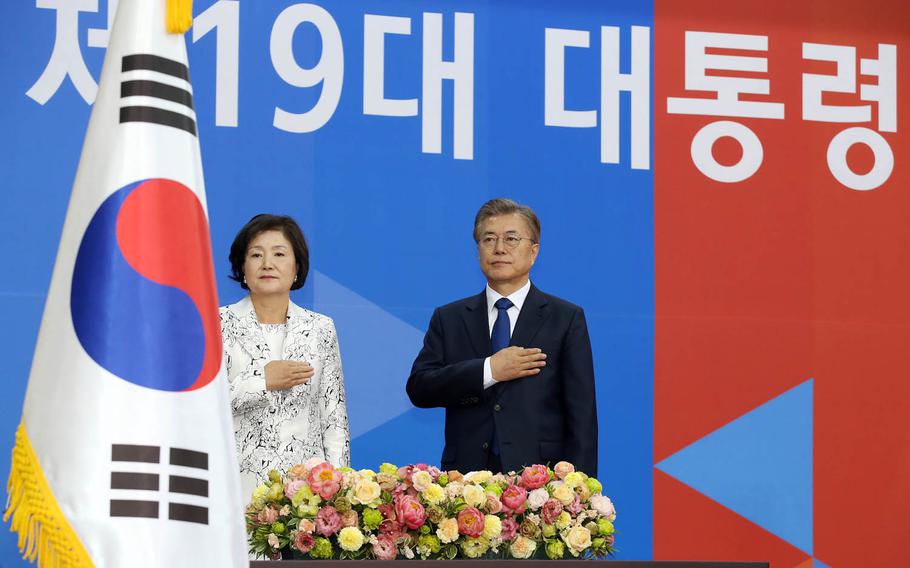 New South Korean President Moon Jae-in and his wife, Kim Jung-suk, observe the national anthem during his swearing-in ceremony in Seoul, Wednesday, May 10, 2017. (Courtesy of Korea.net)

New South Korean President Moon Jae-in and his wife, Kim Jung-suk, observe the national anthem during his swearing-in ceremony in Seoul, Wednesday, May 10, 2017. (Courtesy of Korea.net) 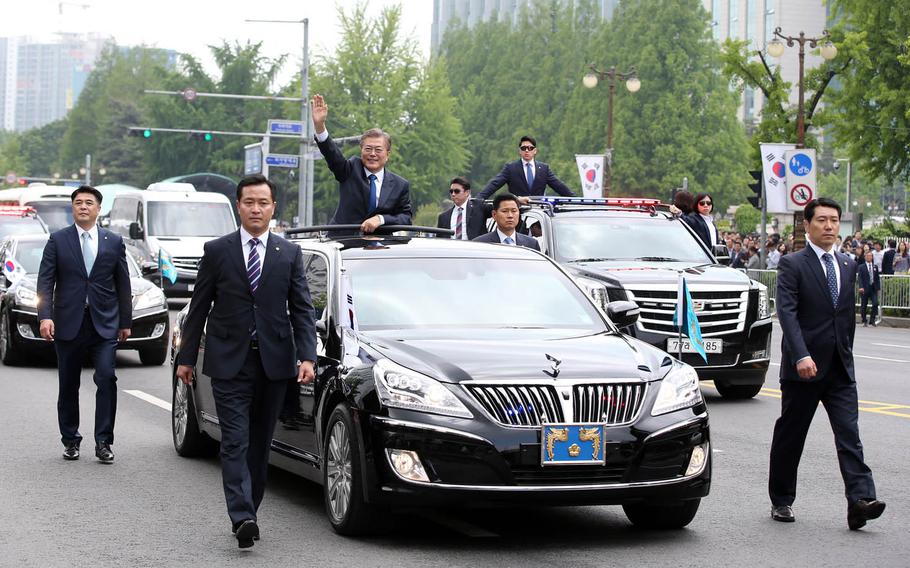 Moon Jae-in waves to supporters in Seoul after being sworn in as South Korea's new president, Wednesday, May 10, 2017. (Courtesy of Korea.net) 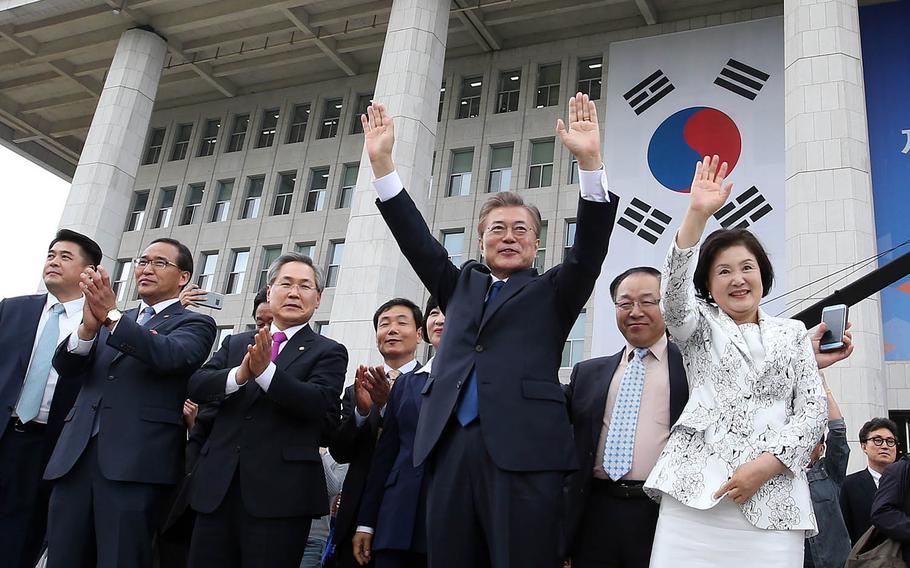 SEOUL, South Korea — South Korea’s new president got right to work Wednesday, saying he’s ready to negotiate with the United States and China over a controversial U.S. missile defense system and would even travel to Pyongyang “if the circumstances are right.”

Moon Jae-in’s comments signal that he will quickly follow through with promises to take a softer approach toward dealing with North Korea, although he sought to reassure Washington of his commitment to the longstanding alliance between the countries amid concern about possible friction ahead.

“I will solve the security crisis in haste,” he said shortly after being sworn into office following a landslide victory in Tuesday’s snap election. “If necessary, I will fly to Washington right away. I will go to Beijing and to Tokyo. If the conditions are right, I will go to Pyongyang.”

The U.S., China and Japan sent congratulations, with the White House saying it joined South Korea’s people “in celebrating their peaceful, democratic transition of power.”

The 64-year-old former human rights lawyer assumes the helm of a country that is deeply divided following a bitter eight-month political crisis that led to the ouster and arrest of ex-President Park Geun-hye.

While an acting president maintained order, South Korea has suffered from a diplomatic vacuum at a critical time of rising tensions over the North’s nuclear weapons program. Seoul also has largely lacked a voice as President Donald Trump’s new administration forged its policy toward Pyongyang, vowing to keep military action on the table but also hinting it may favor a diplomatic approach.

Moon, who won 41 percent of the vote, called on all parties to work together and vowed to do everything possible for peace and stability on the divided peninsula.

South Korea has been caught in the middle of a dispute over THAAD between its main military ally the U.S. and its main trading partner Beijing, which strongly opposes the system due to fears the powerful radar could be used against its military. The issue has complicated efforts to get China to cooperate more on reining in its communist ally.

Washington insists the anti-missile battery is aimed only at countering the growing threat from North Korea but drew anger from South Koreans as well when it rushed to install the system in an overnight operation in the remote southeastern area of Seongju. As a candidate, Moon said THAAD operations should be suspended until they could be reviewed by the next administration.

“I will negotiate with the U.S. and China earnestly with the purpose of solving the THAAD issue,” he said Wednesday, even as he promised to strengthen the U.S.-South Korean alliance.

Trump has given mixed signals about his policies toward the North since taking office on Jan. 20. The administration has dispatched warships to the region and rushed THAAD into place.

But Trump also said earlier this month that he would be “honored” to meet with North Korean leader Kim Jong Un if it was appropriate. The White House later clarified his remarks saying the current conditions were not right for dialogue.

White House spokesman Sean Spicer issued a statement saying the Trump administration looked forward to working with Moon “to continue to strengthen the alliance between the United States and the Republic of Korea and to deepen the enduring friendship and partnership between our two countries.”

Chinese President Xi Jinping congratulated Moon on his victory, expressing willingness “to work with South Korea to jointly safeguard the hard-earned achievements in bilateral relations,” according to the official Xinhua news agency.

Moon’s victory returns a liberal government to power in South Korea after more than a decade of conservative rule. The constitution required that he begin his single, five-year term immediately after the election results were confirmed, forgoing the usual period of transition.

A son of North Korean refugees, Moon has said he favors a dual-track approach toward Pyongyang that includes pursuing talks while continuing to apply pressure on it to abandon its nuclear and missile programs.

Moon — who was chief of staff for the last liberal president, the late Roh Moo-hyun — also has said he will reopen Kaesong Industrial Park, a joint economic project between the two Koreas that was closed last year as tensions began to spike.

Moon picked Suh Hoon, an expert on North Korea who helped arrange summit talks between the countries in the 2000s, as the head of the country’s intelligence agency.

Suh Hoon endorsed the idea of a North-South summit but said it wouldn’t be happening anytime soon because of the tensions between the countries, according to The Associated Press.

“If conditions ripen and provide opportunities to significantly lower military tension in the Korean Peninsula and open a path toward solving the North Korean nuclear problem, which is the most urgent threat to our security, then I think [Moon] will be able to go to Pyongyang,” he told reporters after his appointment was announced.

Moon’s popularity surged as the former ruling party was thrown into disarray over the influence-peddling and corruption scandal involving Park and her longtime friend, Choi Soon-sil.

The former president, who was a staunch U.S. ally, faces a possible life prison sentence if she’s convicted in a trial later this month on bribery, extortion and other corruption charges.