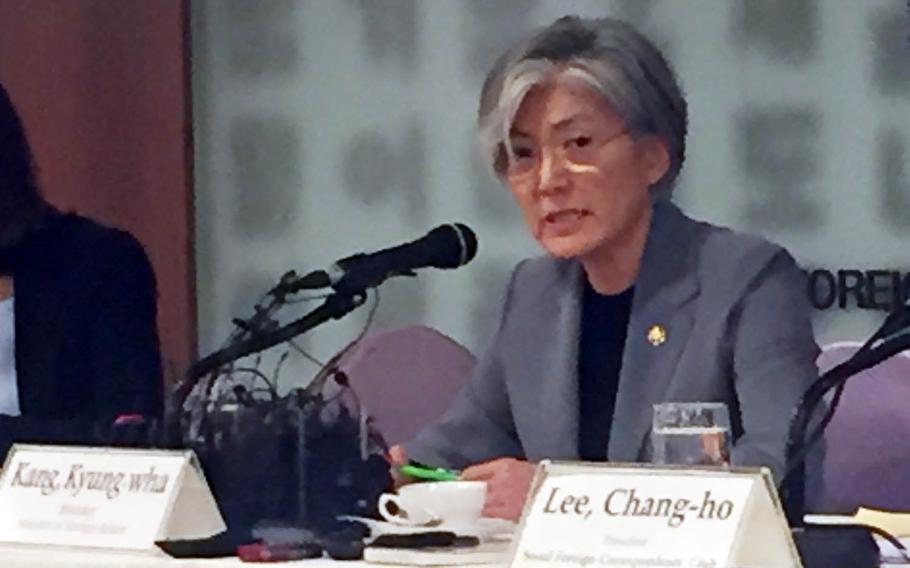 SEOUL, South Korea — South Korea said Monday that it’s not reviewing its policy on the redeployment of U.S. nuclear weapons after Sen. John McCain said the idea should be “seriously considered” as a way to counter the growing threat from the North.

McCain’s comments were made Sunday on CNN as he called for the United States to increase its presence in the region and warned North Korean leader Kim Jong Un that his country could face “extinction” if it “acts in an aggressive fashion.”

North Korea, in turn, vowed the U.S. will pay a harsh price if harsher sanctions are approved by the U.N. Security Council on Monday as Washington and its allies pressed for an oil embargo following the communist state’s sixth nuclear test.

McCain said the U.S. needs to increase its missile defense and other capabilities in South Korea and do more to pressure China to help. He also raised the once-unthinkable idea of redeploying U.S. nuclear weapons in South Korea.

“The Korean defense minister just a few days ago called for nuclear weapons to be redeployed,” the Arizona Republican said on the “State of the Union” program. “It ought to be seriously considered.”

He was referring to remarks by Defense Minister Song Young-moo during an appearance at the National Assembly last week.

The U.S. brought the weapons to the South in the years following the 1950-53 Korean War but withdrew them in 1991 after the two Koreas agreed to denuclearize the peninsula.

President Moon Jae-in’s office has consistently rejected the idea of redeploying the warheads in response to mounting opposition calls to do so.

Foreign Minister Kang Kyung-wha reiterated that the issue was not on the table at the moment, although she acknowledged “that the public opinion is swinging in that direction.”

“We are currently not reviewing the issue of tactical nuclear weapons,” she said Monday during a press conference at the Seoul Foreign Correspondents’ Club. “Our policy remains a complete commitment to denuclearization.”

Kang, who was addressing reporters before traveling with Moon to New York for the U.N. General Assembly later this month, said any U.S. decision on the issue must be made in close coordination with Seoul.

She also insisted that North Korea’s “provocations” must be met with increased pressure to force them to engage in talks.

“North Korea is on a reckless path,” she said. “The price of its continued provocations in blatant disregards of the peace-loving members of the international community will be instability and economic hardship.”

The heightened rhetoric and diplomatic efforts came as the U.S. struggled to push through a new U.N. Security Council draft resolution that would impose the toughest-ever sanctions on the North, including a ban on all oil and natural gas exports to the isolated country.

The draft also included a freeze of all foreign financial assets of the government and its leader, as well as bans that would keep countries from hiring North Korean workers or importing textiles from the isolated regime.

However it was unclear whether the U.S. would receive the needed support from veto-wielding China and Russia for such crippling measures or whether the final text would be watered down for the vote expected Monday.

North Korea has made major advances in its nuclear weapons program despite previous U.N. sanctions and other measures aimed at punishing it for violating resolutions that ban its use of such technology.

The North test-fired two intercontinental ballistic missiles in July and sent another projectile soaring over Japan last month. It also conducted its sixth and most powerful nuclear test since 2006 on Sept. 3.