S. Korea promises to avoid hype in joint war games with US 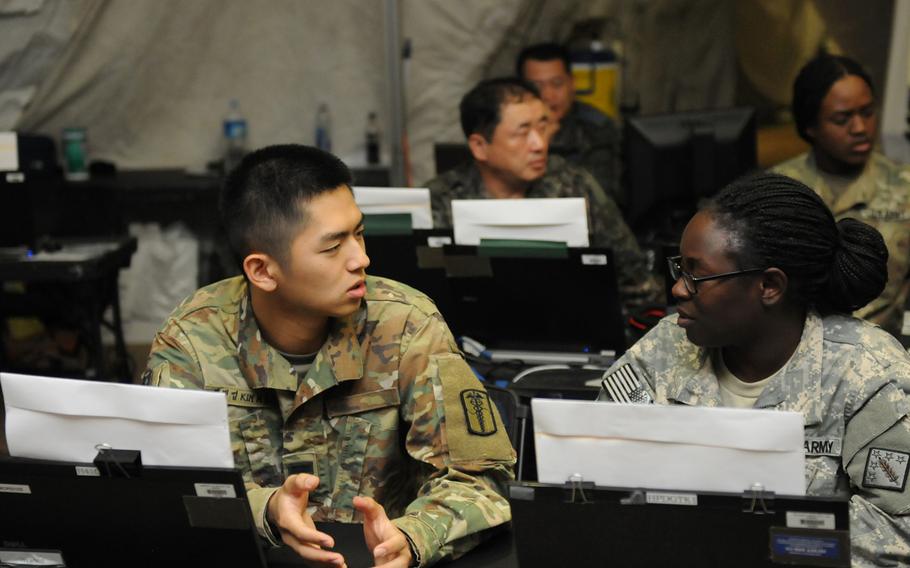 SEOUL, South Korea — South Korea will conduct annual war games with the United States as planned but will avoid publicizing them to facilitate diplomatic efforts over the North’s nuclear weapons program, the defense ministry said Monday.

North Korea has sharply denounced joint military exercises, which it considers rehearsals for an invasion, ahead of an unprecedented summit planned between Kim Jong Un and President Donald Trump on June 12 in Singapore.

“We will be conducting the U.S.-[South Korean] joint military exercises normally in line with annual plans,” ministry spokesman Lee Jin-woo said during a press briefing. “But we’ll refrain from promoting the contents of the joint drills or opening them to the public as best we can.”

The comments came a day after North Korea criticized the South for planning to join upcoming international maritime drills in Hawaii known as Rim of the Pacific and a major joint exercise with the U.S. called Ulchi Freedom Guardian, which begins in August.

The U.S. and South Korea agreed earlier this year to postpone the start of springtime exercises until after the Olympics and Paralympics were held on the divided peninsula to encourage the North to join the Winter Games.

South Korean envoys who visited Pyongyang said Kim understood the allies would continue their military exercises, and state-run media were relatively quiet when the drills known as Foal Eagle and Key Resolve finally began in April.

Seoul and Washington also have kept the exercises relatively low-key, especially compared to last year when the U.S. deployed supersonic bombers and aircraft carriers to the region with fanfare amid a spike in tensions.

But the North has resumed its criticism and even called off a high-level meeting with South Korea last month to protest Air Force drills known as Max Thunder.

The U.S. maintains about 28,500 servicemembers in South Korea, which remains technically at war with the North since their 1950-53 conflict ended in an armistice instead of a peace treaty.

The allies regularly train together but insist the drills are defensive in nature and necessary to maintain readiness.