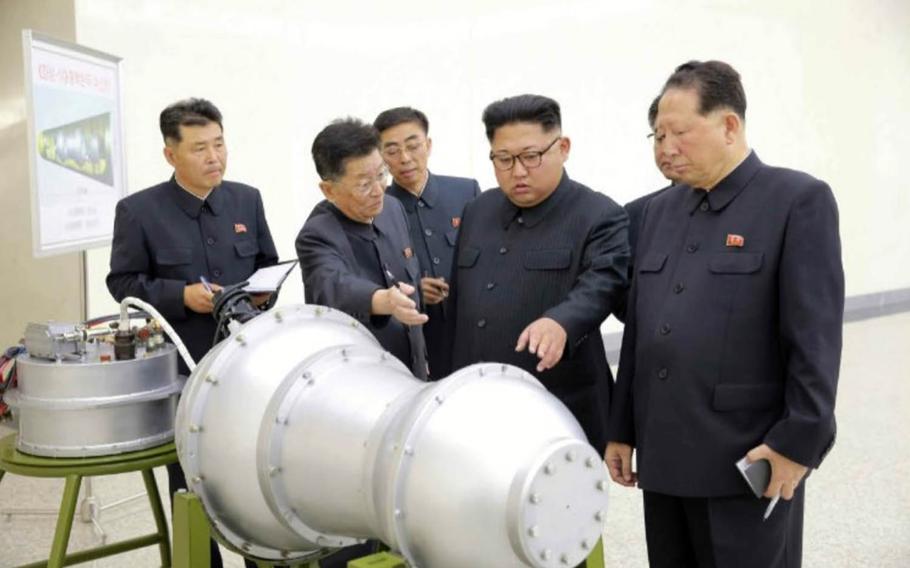 SEOUL, South Korea — South Korea said Wednesday that it’s monitoring closely for any signs of radiation after North Korea’s sixth and most powerful nuclear test, which satellite images show apparently caused numerous landslides on the mountain that provided its cover.

The blast, which occurred Sunday at North Korea’s testing facility, was followed by a second smaller tremor that raised fears of a possible tunnel collapse that could allow radiation to seep out.

Commercial satellite imagery obtained the day after the test “appears to show numerous landslides throughout the Punggye-ri nuclear test site and beyond,” according to 38 North, a website run by the U.S.-Korea Institute at Johns Hopkins University. The images show small landslides going from the peak of Mount Mantap into a stream below.

“These disturbances are more numerous and widespread than what we have seen from any of the five tests North Korea previously conducted,” it said in a report posted on Tuesday.

Researchers said there was no evidence of a cave-in but said the resolution of the photos, which was obtained by the imagery company Planet Labs, was insufficient to show other damage.

South Korea’s Unification Ministry said the government was on the lookout for any signs of radiation. Unification Minister Cho Myoung-gyon told lawmakers on Tuesday that North Koreans living near the site may have been exposed, his spokesman said.

“We are watching the situation closely due to the seriousness of harm caused by possible radiation leaks,” the spokesman, Baik Tae-hyun, told reporters on Wednesday.

The Korean Institute of Nuclear Safety told Stars and Stripes that it has not yet detected any signs of radiation in South Korea but was monitoring the situation.

Chinese researchers have said they believe the mountain may be in danger of collapsing and spreading radiation throughout the region, according to the South China Morning Post.

The newspaper said researchers at the University of Science and Technology of China based their findings on data collected by more than 100 earthquake monitoring centers and the margin of error was no more than 330 feet.

Wang Naiyan, a senior researcher on China’s nuclear weapons program, told the newspaper that if the results were confirmed, the mountain could be in danger of collapsing, which would allow the radiation to leak.

“We call it taking the roof off,” he was quoted as saying. “If the mountain collapses and the hole is exposed, it will let out many bad things.”

However, he stressed that it was not easy to make precise predictions based on seismic data and the researchers could be wrong. He also said the radiation risk would depend on where the bombs were placed in the tunnels.

North Korea claimed it had successfully tested a hydrogen bomb that could be fitted on an intercontinental ballistic missile, prompting international condemnation and a U.S. warning that it will meet threats with a “massive military response.”

The blast had a magnitude ranging from 5.9 to 6.3 and yielded a force as high as 120 kilotons, which would be about eight times the strength of the bomb that devastated Hiroshima during World War II, according to 38 North.