S. Korea military: Most U.S. troops to stay at JSA 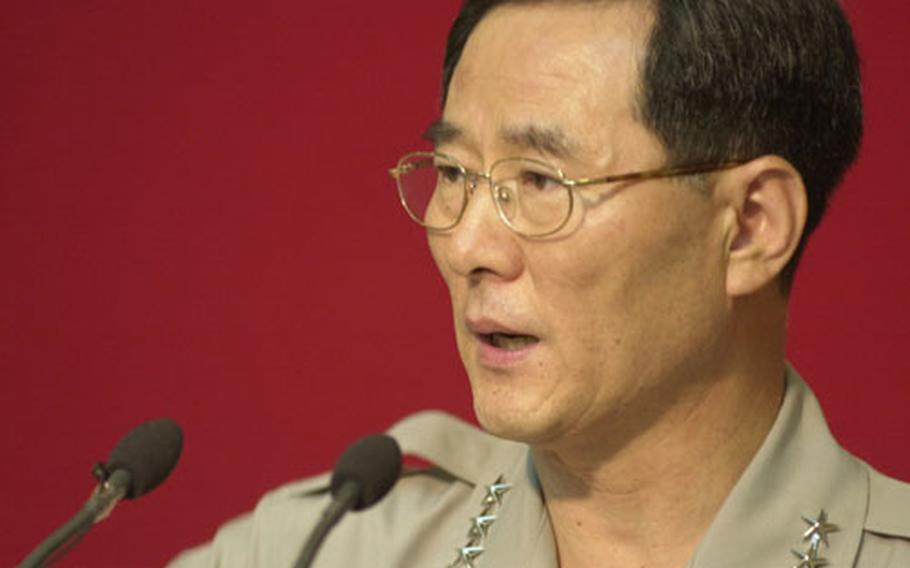 U.S. soldiers have a symbolic role in the JSA, and the exact number of those remaining, as well as the date of moving them from Panmunjom, are still undecided, said Lt. Gen. Cha Young-koo, South Korea&#8217;s deputy defense minister.

U.S. soldiers comprise about 40 percent of the 550-man Joint Security Battalion, which functions under the U.N. umbrella and is commanded by an American lieutenant colonel.

Cha made the comments after a two-day meeting with top American officials to hammer out an agreement on shuffling U.S. forces on the Korean Peninsula. It was the fourth gathering of the so-called Future of the Alliance Policy Initiative; the next meeting is scheduled for early October, Cha said.

U.S. Deputy Assistant Secretary Richard Lawless led the American delegation, but there were no U.S. officials at Thursday&#8217;s press conference, held at the Ministry of National Defense in Seoul.

During the talks, the two sides also reiterated that Yongsan Garrison will move south of the Han River as soon as possible and that the remaining troops will be placed near South Korea&#8217;s Defense Ministry establishments, but no timetable has been set.

&#8220;The size of remaining troopers will be about 1,000 as the commander of [U.S. Forces Korea] said earlier, but the number could be increased according to the missions of the United Nations Command and the Combined Forces Command,&#8221; Cha said.

"But concerning the size of the land that the U.S. side would like to use, we have never formally discussed that,&#8221; Cha said, stressing that specific figures have not been addressed.

The United States and South Korea made a Memorandum of Agreement and Memorandum of Understanding in 1990 concerning Yongsan relocation, but those two accords have come under criticism from South Koreans.

So rather than revise the existing MOA and MOU, Cha said, both sides agreed to have a new &#8220;Umbrella Agreement,&#8221; which would cover all necessary basic principles tied to the Yongsan relocation.

Unlike the old deals, the Umbrella Agreement will be ratified by both governments and carry more legal power, Cha said.

Concerning the 2nd Infantry Division&#8217;s relocation, the two sides confirmed they will consolidate 2ID posts around 2004 to 2006. The timing of the second phase moving them south of Han River has not been decided.

Further details will be discussed next month in Seoul before the Security Consultative Meeting between U.S. Secretary of Defense Donald Rumsfeld and South Korean Defense Minister Cho Young-kil.