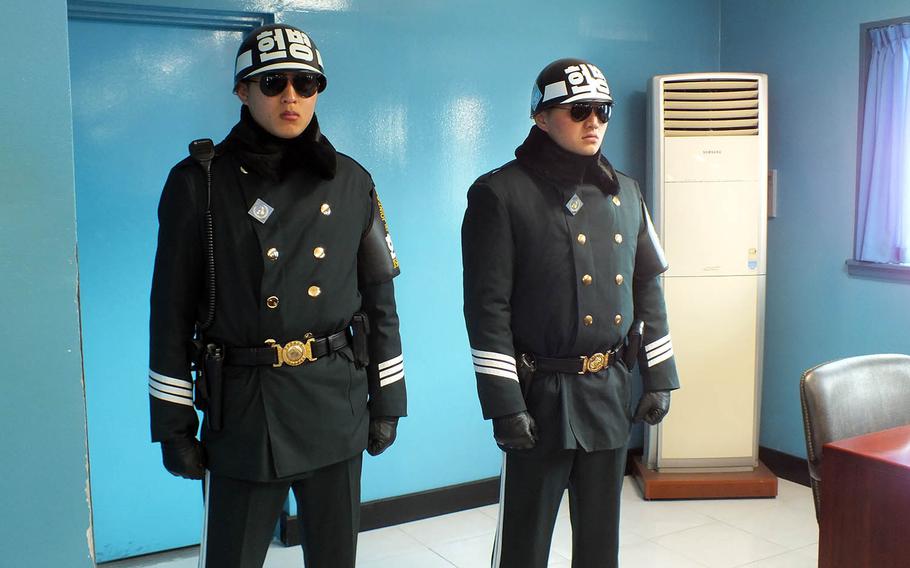 SEOUL, South Korea — South Korea will try to use talks with North Korea about its possible Olympic participation to jumpstart a broader process of engagement between the longtime adversaries, officials said Monday.

The statements reflect hopes that the dialogue to be held Tuesday in the truce village of Panmunjom will give momentum to efforts to peacefully resolve the crisis over the North’s banned nuclear weapons program.

President Donald Trump also said he “would love” to see the two sides discuss more than just the Olympics, adding that he would be willing to speak by phone with North Korean leader Kim Jong Un.

The Republican president has previously dismissed talks with Pyongyang as a waste of time but appeared to soften his fiery rhetoric ahead of the first round of talks between the two Koreas in more than two years.

Seoul and Washington have agreed to postpone joint war games until after the Feb. 9-25 Olympics in a nod to the North, which considers the military exercises to be a rehearsal for an invasion.

No new date has been set for the drills, but Defense Secretary Jim Mattis said they would resume after the Paralympics conclude on March 18 in the South Korean resort city of Pyeongchang.

South Korean President Moon Jae-in has pressed for Pyongyang to participate in the Winter Games as part of his administration’s efforts to pursue peace and ease security fears surrounding the competitions.

Unification Minister Cho Myoung-gyon, who will lead a five-member government delegation to the talks on Tuesday, said South Korea also will seek to discuss ways to ease military tensions and reunite families that were left divided after the 1950-53 Korean War, which ended in an armistice instead of a peace treaty.

“The two sides will focus on the Olympics. When discussing inter-Korean relations, the government will seek to raise the issue of war-torn families and ways to ease military tensions,” Cho was quoted as saying by the Yonhap News Agency. “After this week’s high-level talks, there will be the need to continue discussions at the working level.”

Ministry spokesman Baik Tae-hyun declined to elaborate when asked during a separate briefing if the nuclear issue will be raised. “The two Koreas plan to discuss Olympic cooperation and issues of mutual concern,” he told reporters.

North Korea’s chief negotiator will be Ri Son Gwon, chairman of the state agency in charge of inter-Korean affairs.

The talks were scheduled after North Korea’s leader said in his New Year’s Day address that his country may participate in the games. At the same time Kim warned the United States that a nuclear button sits on his desk at all times.

That prompted Trump to boast that his nuclear button is “much bigger and more powerful,” the latest salvo in a war of words between the two leaders.

U.S. Ambassador to the United Nations Nikki Haley defended Trump’s comments about North Korea after critics complained he was trivializing the possibility of nuclear war.

“I think he always has to keep Kim on his toes,” she said during an interview on ABC’s “This Week” news program.

While the initial round of talks has raised optimism after months of tough talk and weapons tests, many experts have warned that the North Koreans may have ulterior motives such as driving a wedge between the South and the United States.

Pyongyang has been known to use talks in the past as leverage to wrangle aid and other concession from the West. It is suffering from several rounds of economic sanctions aimed at punishing it for dozens of missile and nuclear tests in defiance of U.N. Security Council resolutions banning the use of such technology.