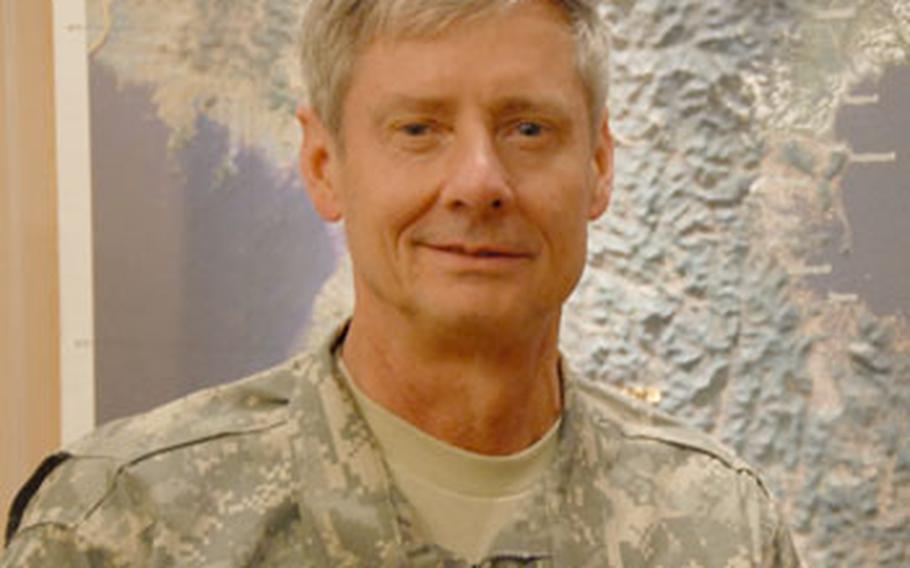 "I was always confident that the ROKs could take a look at the battle and make a decision, and that was confirmed in this exercise," Sharp said during an exclusive interview.

Ulchi Freedom Guardian, which ended Friday, was the first of four exercises that will test South Korea&#8217;s ability to lead troops in a war against North Korea before South Korea takes over wartime control of all troops in the country on April 17, 2012.

Sharp said the transfer process was farther along than he expected.

"At a crawl-walk-run perspective &#8230; my estimate coming out of this is that we&#8217;re somewhere between crawl-walk right now," he said.

Sharp said the biggest problem that emerged in the weeklong exercise was making sure both militaries, which will operate from different headquarters, see the same information during war.

"What we found on this exercise is that in some cases &#8230; we have different databases being fed by different things and coming up with different results," he said.

Sharp said his top priority in the next year will be fixing those problems, possibly through mini-exercises and seminars.

"The battle for information is as big a battle as going out and shooting, and both sides have a vote on that as we go through," he said. "Then put on top of it, not only do we have one military against one enemy, but an alliance with different languages and different capabilities, and how do you make sure all that is synchronized?"

Sharp, who took command of USFK, the United Nations Command and the Combined Forces Command in May, said South Korean military leaders were given "pretty challenging scenarios" in Ulchi Freedom Guardian that forced them to set battle priorities. For instance, leaders had to decide whether to commit a reserve unit to an immediate attack or save it for another critical operation that had already been planned.

Part of the exercise included rehearsing how the U.S. and South Korean governments would coordinate the start of a war.

President Lee Myung-bak held a Cabinet meeting on Monday to decide whether to raise wartime readiness level for the exercise. On Thursday, he held another Cabinet meeting and met South Korea&#8217;s top general at a command post for an update on the war.

And Lee said Friday that his country needs a stronger military to cope with threats from abroad, amid rising tensions with a nuclear-armed North Korea, according to the Associated Press.