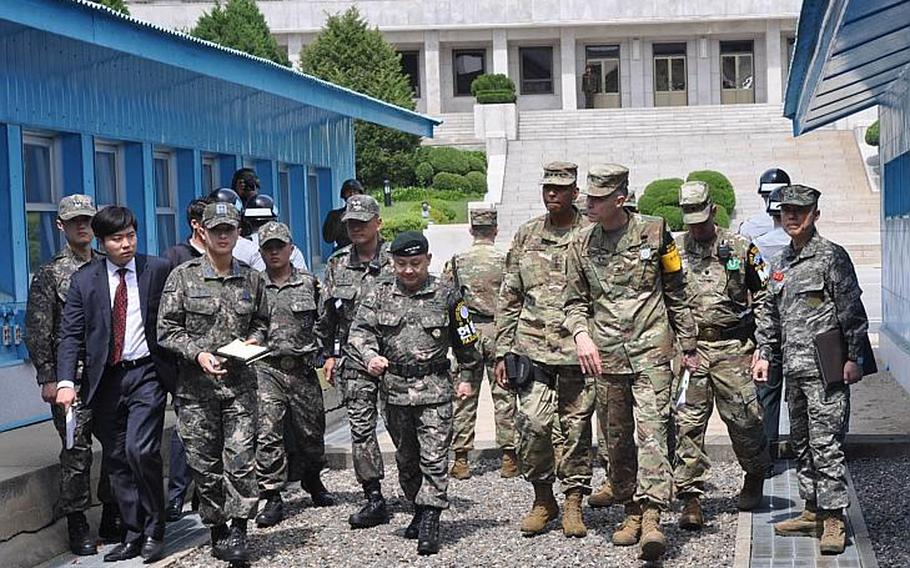 Gen. Vincent Brooks, U.S. Forces Korea commander, and Gen. Lee Soon-jim, of the South Korean joint chiefs of staff, receive a briefing at the Joint Security Area of the Demilitarized Zone Thursday, May 12, 2016. The South Korean government reported Monday that U.S. bases and a South Korean civilian appeared on a list of targets circulated by pro-Islamic State hackers. (Kim Gamel/Stars and Stripes)

SEOUL, South Korea — The South Korean government said Monday it will step up security measures against potential terrorist threats after U.S. air bases and a South Korean civilian reportedly appeared on a list of targets circulated by a pro-Islamic State group of hackers.

U.S. Forces Korea said the alert levels at military installations on the divided peninsula have not changed but stressed it is ready to respond “at any time to any emerging threats.”

Concern was raised over the weekend when South Korea’s state spy agency said Islamic State has called for attacks by revealing the locations of 77 U.S. and NATO air force installations, including Osan and Kunsan air bases, on messaging services. A South Korean employee of a welfare organization also was listed, the agency said.

The list included targets in several countries and was a troubling reminder that South Korea faces possible threats beyond its longtime rival to the north. The two Koreas remain technically at war since the 1950-53 conflict ended in an armistice instead of a peace treaty. Some 28,500 American servicemembers are stationed in the South.

The National Intelligence Service statement warned that “terror against South Korean citizens and foreigners in this country is becoming a reality.”

The spy agency apparently was referring to a so-called kill list released earlier this month by a pro-ISIS hacking group known as the United Cyber Caliphate with the names, addresses and email addresses of more than 8,000 people. It was not clear how or why the individuals were selected.

The group also published satellite images showing U.S. air bases around the world, although the same images can be found on Google Earth, according to Vocativ, a media and technology company that reported on the list on June 8.

NIS said it had told the U.S. military and South Korean military and police agencies to be on guard and to provide sufficient protection for the facilities mentioned by the group.

USFK said it takes the safety of the installations very seriously and remains committed to ensuring the highest degree of security on the peninsula.

“Through constant vigilance and regular exercises with our South Korean counterparts, we remain prepared to respond at any time to any emerging threats,” it said in an emailed statement.

South Korean Prime Minister Hwang Kyo-ahn said Monday that the government will come up with measures to prevent terrorist attacks, the Yonhap news agency reported. He said the nation’s counterterrorism center also will increase investigations and take every possible step to protect the public.

“The Islamic State of Iraq and the Levant has been citing South Korea as a potential target for its attacks since last September,” Hwang was quoted as saying.