This signature-covered Japanese flag, taken as a war trophy during the Battle of Iwo Jima, was returned to the family of its former owner in Takasaki, Japan, Thursday, Feb. 14, 2019. (Theron Godbold/Stars and Stripes) 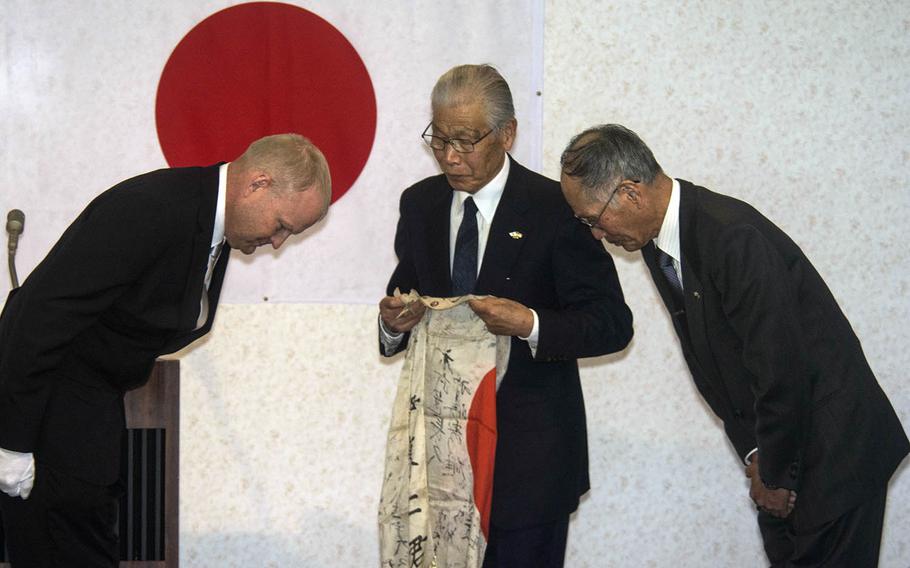 Senior Master Sgt. Lowell Armstrong, 44, presented the signature-covered flag to the family of Masashi Ito, who was killed in the bloody Battle of Iwo Jima on March 17, 1945.

Such flags were often signed by servicemembers’ families, neighbors, schoolmates and co-workers wishing for good fortune in war. The warriors would then fold the flag and carry it into battle.

Armstrong put on white gloves, unfolded the relic and presented it to Ito’s nephews, Michio Miki, 90, and Hideo Ito, 76, during a formal ceremony attended by local officials at Gunma Gokoku Shrine, which honors war dead.

Ito’s flag is covered with more than 30 signatures and messages wishing him good luck and congratulating him for joining the Japanese Imperial Navy.

“I’m truly grateful that my grandfather kept this flag in great condition all these years and my family decided to return it to its rightful owners as we know how much it means to your family,” said Armstrong, who works in traffic management at Kunsan Air Base. “My grandfather would be happy that this flag is being returned.”

Armstrong’s grandfather, Lowell Armstrong, had not talked about his experience during the war nor about the Japanese flag. After his death in 2002, his son, Steve, took possession of the flag and began researching how to return it. He eventually reached out to the Obon Society for help in 2016.

“Out of respect to his family, it is only right to return it,” Armstrong told Stars and Stripes days before Thursday’s ceremony. “From my understanding, the Japanese believe the spirit of the soldier lives on in the flag.”

Ito’s nephews said they were shocked to find that their uncle’s flag had survived after more than seven decades.

“It was a great surprise to have it returned like this out of millions of those that died [during the war],” Miki said. “I am thankful for the thoughtfulness of Mr. Armstrong’s grandson to return it like this.”

While such repatriations are common, Tuesday’s ceremony marked the first time an active-duty soldier returned one of the flags, according to Keiko Ziak, co-founder of the Obon Society.

“I am honored to represent my family in this return ceremony,” Armstrong said. “I was named after my grandfather … he was one of the kindest, hardworking men anyone would ever meet. He would do anything for anyone.”