S. Korea-based GI is Soldier of the Year 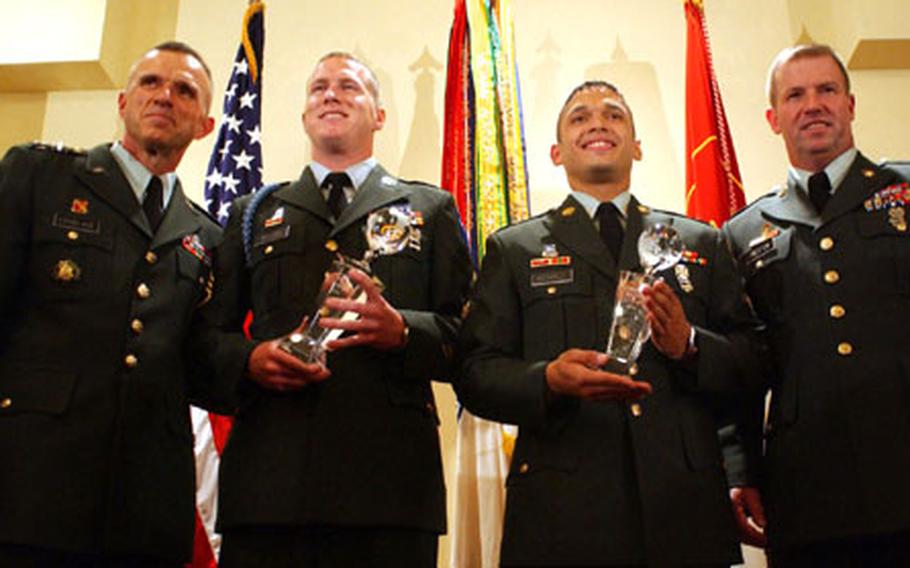 From left, Lt. Gen. James J. Lovelace, director of Army staff; Staff Sgt. Andrew J. Bullock, representing Training and Doctoring Command; Spc. Wilfredo A. Mendez, of 8th Army; and Sgt. Maj. of the Army Kenneth O. Preston at the 2004 Department of the Army Noncommissioned Officer and Soldier of the Year competition. Bullock and Mendez received their titles after a week-long testing period. (Courtesy of U.S. Army)

News that South Korea-based Spc. Wilfredo A. Mendez was chosen 2004 Soldier of the Year for the entire U.S. Army touched off feelings of pride and excitement within his unit at Camp Humphreys, unit members said Wednesday.

The Army selected Mendez after he vied in weeklong competition with soldiers from other major Army commands. Mendez represented one of those commands, the 8th U.S. Army, which is headquartered in Seoul.

He was en route back to Camp Humphreys on Wednesday, his unit said, and couldn&#8217;t be reached for comment.

The competitions in both categories started Sept. 12 and put the soldiers through the Army Physical Fitness Test, a six-mile road march, day and night navigation courses and weapons qualification, other tests of battle skills and a written exam and essay.

Then, on Sept. 16 came a final step in the competition: the appearance before a board of senior soldiers who appraised not only the competing soldiers&#8217; answers to questions but their military bearing, speaking ability, military knowledge and military record.

Sgt. Maj. of the Army Kenneth O. Preston presided over the board, which met in Crystal City, Va.

&#8220;The whole week has been a perfect challenge,&#8221; Mendez said later at an award ceremony at Fort Myer, Va., according to an Army news release.

Even though Mendez went to the competition representing the U.S. Army in South Korea, Company A wants everyone to know that Mendez is their guy.

Mendez is assigned to Company A&#8217;s Aerial Reconnaissance Support Team. In wartime, the team would set up high-tech gear on the battlefield and receive information from low-flying aircraft scouting the battle area. Mendez is trained to analyze and interpret that aerial intelligence and then brief commanders.

Mendez, from Rio Grande, Puerto Rico, is working toward a bachelor&#8217;s degree in business administration and is a graduate of the Airborne School and the Combat Life Saver Course. He&#8217;s been accepted for duty with the Army Special Forces, Bonesteel said.