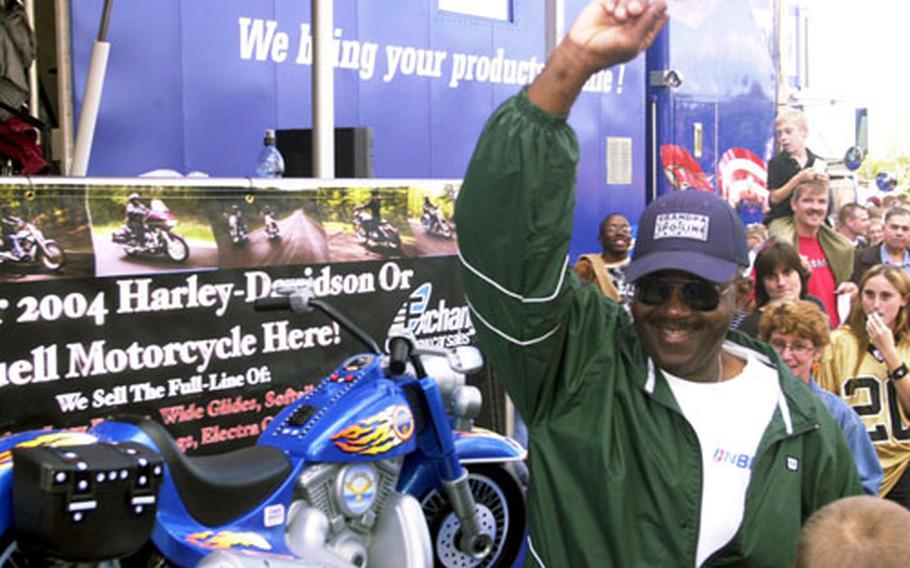 VOGELWEH, Germany &#8212; Whoever holds ticket 07757 in the raffle for the Harley-Davidson motorcycle, Tech. Sgt. John Green thanks you for your inattention. Green, a cargo specialist with the 38th Aerial Port Squadron from South Carolina, is the happy owner of a 2004 Harley after Sunday afternoon&#8217;s drawing at Vogelweh.

Army and Air Force Exchange Service and Air Force groups at Ramstein Air Base gave away the bike at the Vogelweh AAFES New Cars Sales as a charity fund-raiser.

The raffle and other events raised more than $10,000, Col. Warren D. Berry, 435th Mission Support Group commander at Ramstein Air Base, said as he got ready to pick the winning entry. Actually, it turned out to be &#8220;entries,&#8221; plural, as the holder of the first winning number failed to appear.

The Sportster will be the second bike for the 52-year-old native of North Charleston, S.C., where he works for a wine company in the civilian world.

Green will pick up the bike when he returns home to Charleston after temporary duty at Ramstein with the 38th Aerial Port Squadron, a South Carolina Air Force Reserve unit.