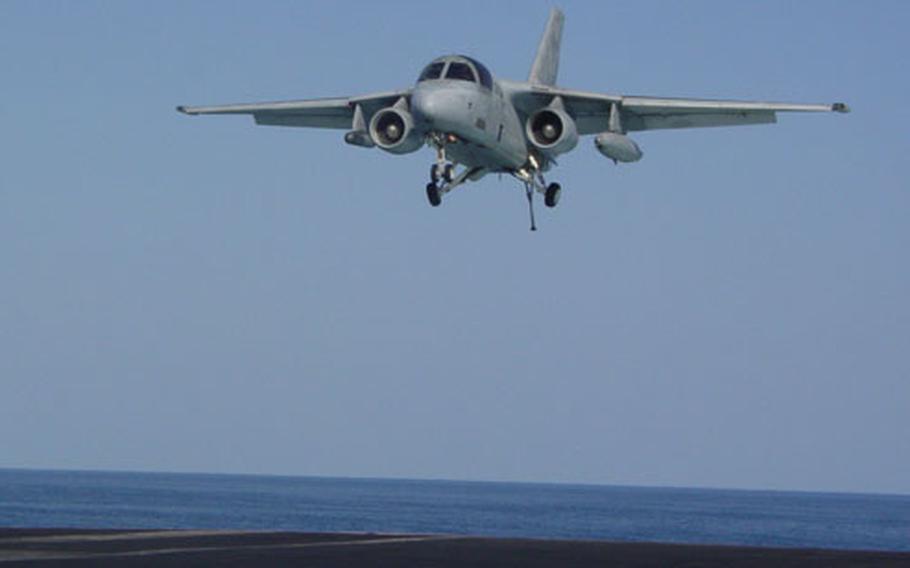 An S-3B prepares to lands onto the USS Enterprise earlier in October. (Scott Schonauer / S&S)

An S-3B prepares to lands onto the USS Enterprise earlier in October. (Scott Schonauer / S&S) 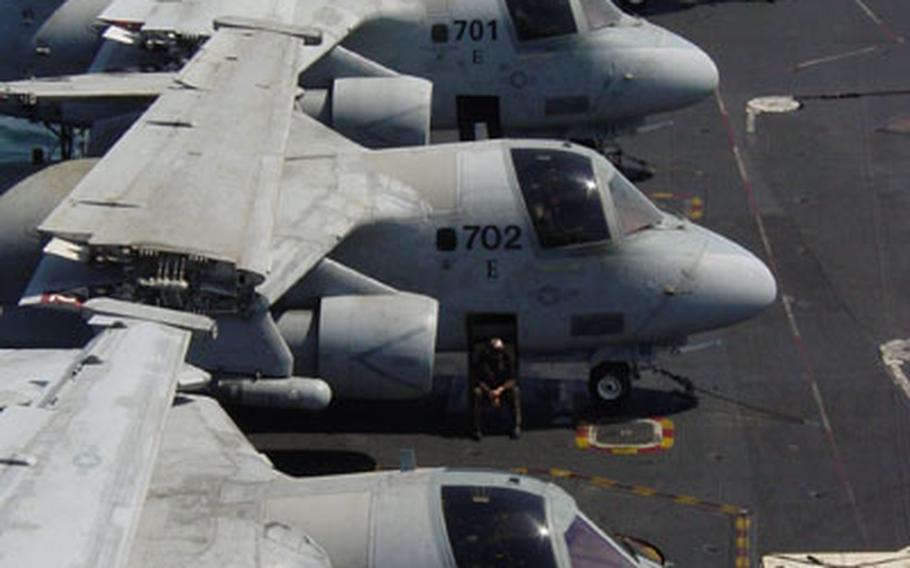 S-3B Vikings are parked aboard the USS Enterprise earlier in October, while the aircraft carrier cruises in the Gulf of Oman. This is the Viking&#39;s last trip to the Middle East region. The Navy is retiring the aircraft after more than 30 years, but pilots and maintenance personnel have questioned the move. (Scott Schonauer / S&S)

That&#8217;s because the S-3B Viking&#8217;s engines sound like a vacuum when they begin to turn. But that familiar sound that has been a mainstay aboard Navy aircraft carriers for decades will gradually disappear from the fleet as the Navy retires the plane.

The jet is making its final appearance in the Persian Gulf on this deployment aboard the Enterprise. In two years, the Navy hopes to get rid of them all.

It is a slow goodbye to a plane that quietly did its job without garnering the attention of Hollywood like the F-14 Tomcat. But both pilots and maintenance personnel who work with the jet daily have questioned the retirement. They point to studies showing the Vikings are in good shape and can still do the job.

That&#8217;s not the only reason why squadron members are perplexed by the retirement. The S-3B is going away at a time when the Navy arguably needs it the most.

Earlier this month, the Navy released a new strategy for the future that includes maritime security as one of its chief priorities. Ironically, that is the aircraft&#8217;s specialty.

Manufacturer Lockheed Martin Aeronautics originally designed the aircraft during the Cold War to be a submarine hunter for carrier groups. But in the 1990s, the S-3B took on various roles, from aerial refueler to bomber.

The Navy decided about seven years ago to ditch the Vikings because land-strike missions became more important and the planes couldn&#8217;t do those as well as other aircraft. But sea policing is a major objective, and pilots say the Vikings can do it better than anything available on a carrier.

No doubt the Vikings have proved to be versatile. While the planes are slow, they use less fuel. They can travel for hundreds of miles more than a fighter jet on a single tank.

Petty Officer 1st Class Robert Barber, who has worked on the plane&#8217;s electronics and communications equipment his entire career, said the Vikings are unmatched in terms of long-range capability.

The ability to cruise at slow speeds for longer periods of time is helpful when tracking ships in the Persian Gulf. In the last three months, the six jets with Sea Control Squadron 32, nicknamed the &#8220;Maulers,&#8221; have conducted numerous missions in the gulf. Pilots often are monitoring between 600 and 700 boats and ships in the crowded waters, including Iranian vessels, using high-tech camera &#8220;pods&#8221; fastened to the wings.

Three squadrons and about two dozen Vikings are left in the fleet, Walker said. One squadron will decommission early next year. When Squadron 32 returns from this deployment, they get ready to go away later next year. The final squadron will escort the aircraft carrier USS George Washington to Japan around 2009 for the plane&#8217;s last overseas trip.

Younger pilots will transfer to other aircraft in the Navy. Most veteran pilots won&#8217;t and will do different jobs.

Squadron support personnel such as Petty Officer 1st Class Richard Winders, who maintains the Vikings&#8217; survival equipment and ejection seats, also will have to switch. Before coming to Squadron 32, he worked on F-14s. The Tomcat retired last year.