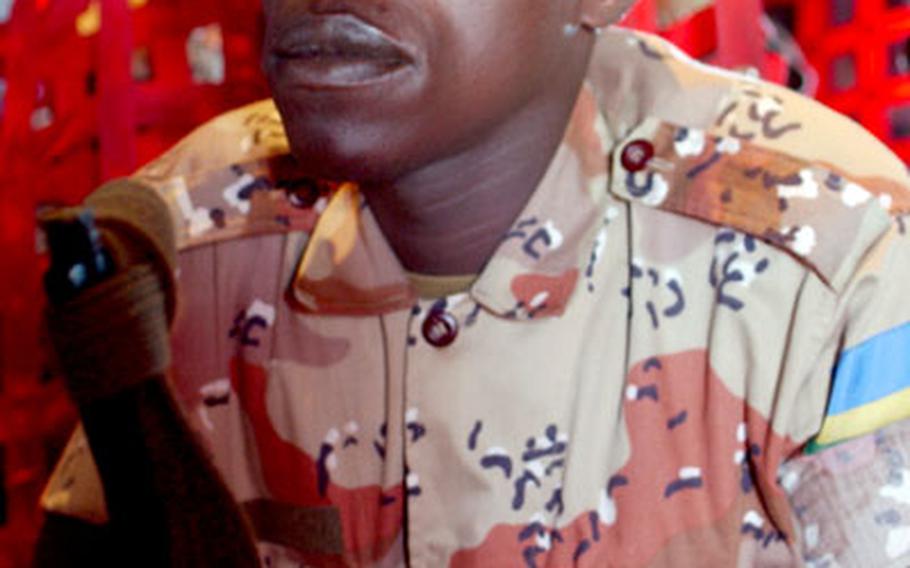 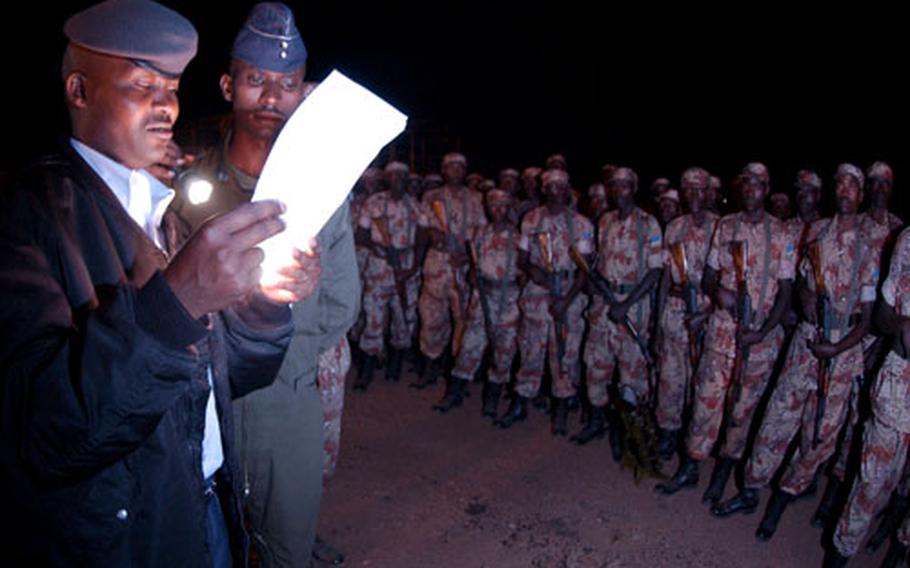 Capt. Deo Mutubazi and Lt. Kadhafi Ntayomba read off names of the Rwandan forces before they board a C-130 from Ramstein Air Base at Kigali International Airport, Rwanda. (Bradley C. Church, Courtesy of U.S. Air Force) 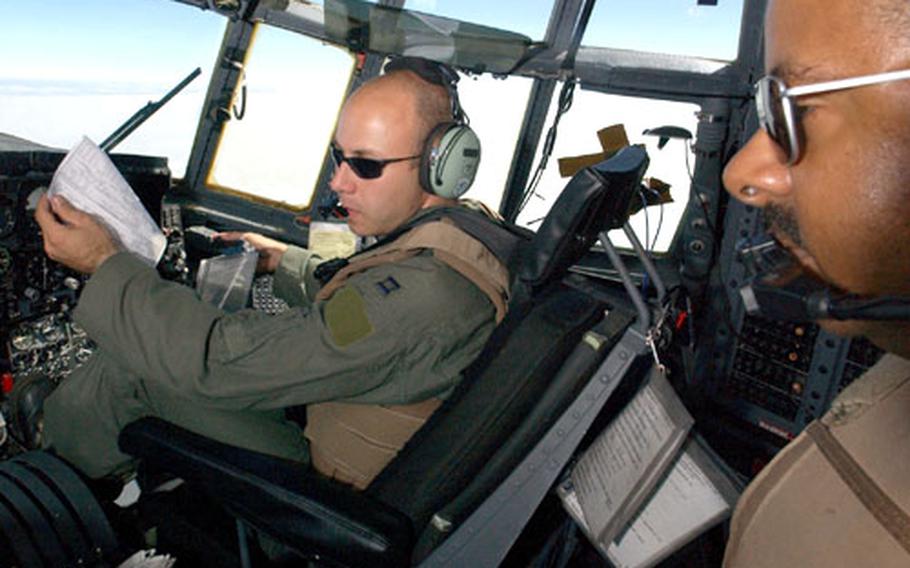 Capt. Robert Lewis, co-pilot, and Tech. Sgt. Harry Brown, the navigator, review the map on a C-130 out of Ramstein Air Base, Germany, en route from Kigali International Airport in Rwanda to Sudan. Lewis and Brown are both with the 86th Air Expeditionary Group. (Bradley C. Church, Courtesy of U.S. Air Force)

Looking a little nervous and talking quietly among themselves, the Rwandan soldiers were like any troops on the brink of venturing into an unknown yet notorious land. Such was the scene Tuesday as a pair of U.S. Air Force C-130s transported 78 Rwandan troops from their capital of Kigali to the embattled Darfur region of Sudan, officials involved said.

Because of the language barrier between U.S. and Rwandan troops, airmen on board the flight used hand signals to communicate with their passengers.

The airmen pointed out where to sit during the roughly five-hour flight, how to buckle in, where to find airsickness bags and how to use oxygen hoods, said 1st Lt. Davina Petermann, a public affairs officer with the 86th Air Expeditionary Group. Petermann accompanied one of Tuesday&#8217;s flights.

&#8220;It was hard to communicate, but there was still a rapport established,&#8221; said Petermann during a Wednesday morning telephone interview from Kigali, Rwanda.

Tuesday&#8217;s flights are part of a larger mission by the U.S. military to transport about 1,200 Rwandan troops to the western Sudan region of Darfur. The entire mission is expected to last about 30 days.

The transport of troops began Sunday when a C-17 Globemaster III delivered 95 Rwandan troops from Kigali to El Fashir, Sudan. On Wednesday, 82 more Rwandan troops were to be transported to Darfur by a pair of C-130s.

About 150 U.S. troops are participating in the mission, with the majority coming from Ramstein Air Base in Germany, Petermann said. While the C-17 left Ramstein last Thursday, C-130s departed Saturday from Ramstein and RAF Mildenhall, England.

During the troop transport airlifts, U.S. planes are on the ground in El Fashir for only about five minutes before flying to Chad for refueling and then returning to Kigali, the logistics hub of the mission.

Once in Darfur, the Rwandan troops will provide security and humanitarian relief to citizens there. The United Nations has estimated that 180,000 people have died since conflict began in Darfur during early 2003, when fighting broke out between rebels and government forces backed by local militias.

The U.S. European Command in Stuttgart, Germany, is coordinating planning for the airlift mission and working with NATO planners at the African Union headquarters in Ethiopia.

And the Rwandan troops are bringing pride along with their mission. Writing on a piece of paper, Petermann asked Pvt. Baganwa Froduald with the Rwandan Defense Forces how he felt. At first, Froduald was not sure what he was being asked so he passed the paper around, Petermann said.