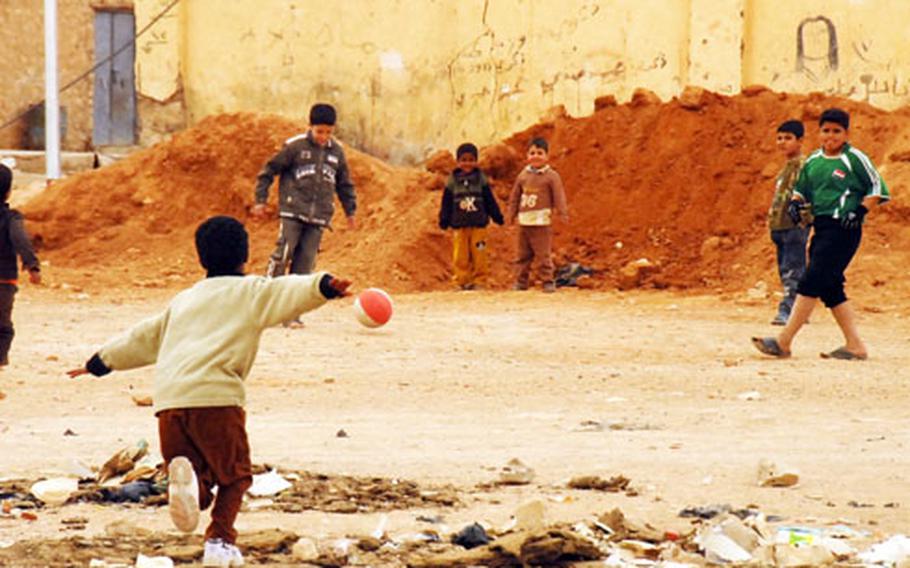 Children play soccer at an empty lot in Rutbah, Iraq, an area that until recently U.S. Marines say was like the Wild West in terms of lawlessness and violence. (Ashley Rowland/S&S)

Children play soccer at an empty lot in Rutbah, Iraq, an area that until recently U.S. Marines say was like the Wild West in terms of lawlessness and violence. (Ashley Rowland/S&S) 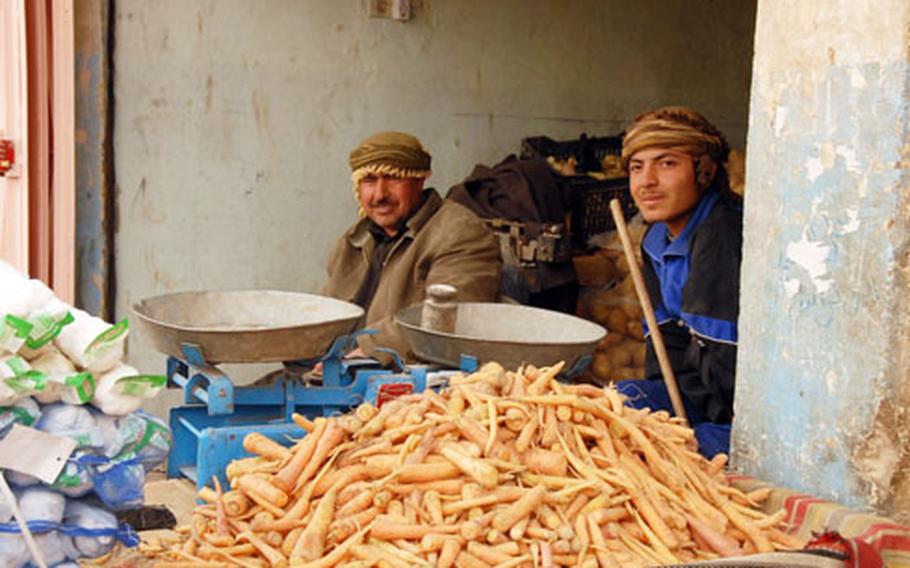 Two men sit at a food stand in the market in downtown Rutbah, which U.S. Marines say used to be full of insurgents. The city is mostly calm now, with little insurgent violence. (Ashley Rowland/S&S) 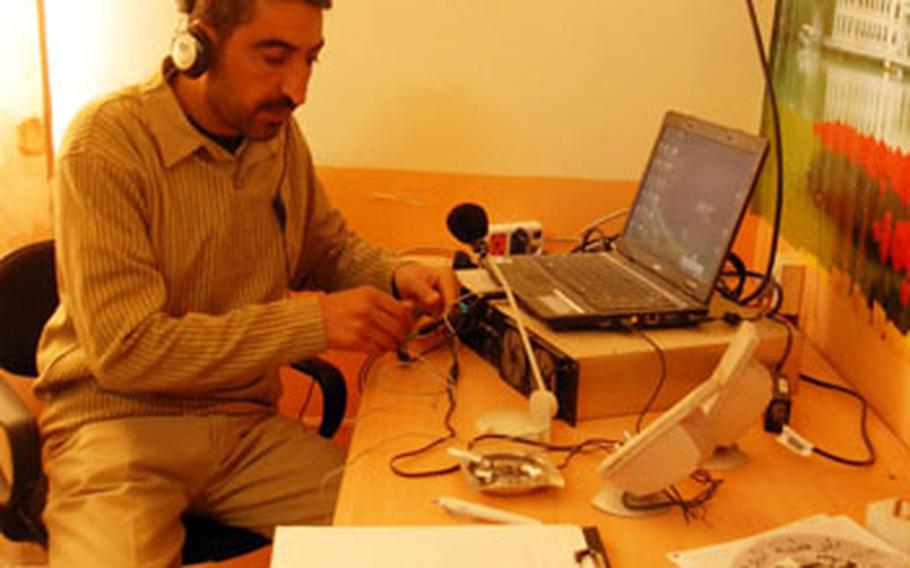 Disc jockey Salih Ahmah Hasoon listens to the radio on Friday, inside Rutbah Today, a radio station that U.S. forces helped start in December. The radio station broadcasts city council meetings, and Hasoon, the only DJ, interviews city officials, using questions that he gathers from people on the street. (Ashley Rowland/S&S) 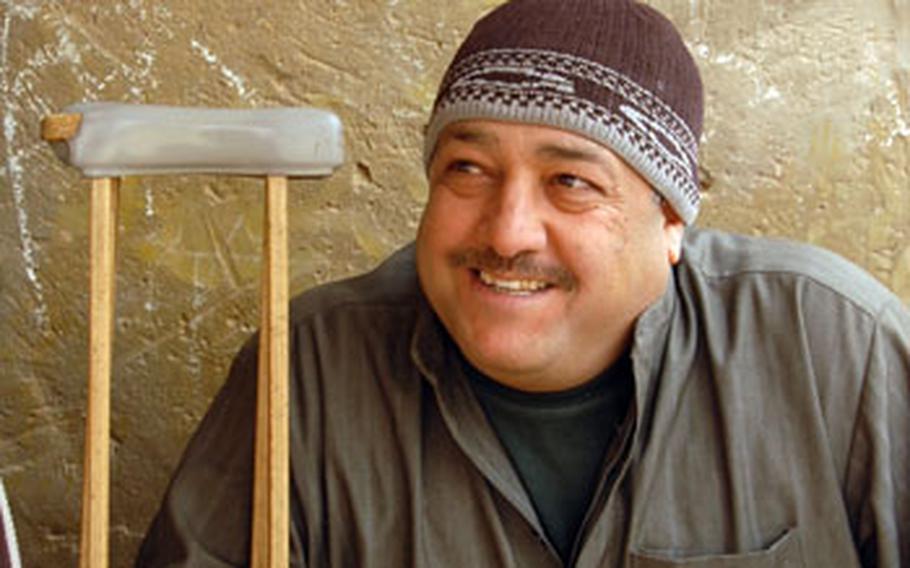 Storeowner Waid al Jyburi says his neighborhood is safe, even though a bomb was found around the corner in front of an Iraqi policeman&#39;s house in November. The bomb was defused, but nobody knows who planted it, al Jyburi said. He uses a crutch because he injured his leg during the Iran-Iraq war. (Ashley Rowland/S&S)

RUTBAH, Iraq &#8212; It was midday on a Friday when police found a box, packed with cookies and a bomb, in a dirt alley across the street from the neighborhood mosque around the corner from Waid al Jyburi&#8217;s tiny snack shop.

Planted in front of an Iraqi policeman&#8217;s house, the bomb was designed to blow up as soon as someone &#8212; maybe one of the many children playing in the streets &#8212; reached in for a cookie.

Three months later, the bomb is a distant memory to al Jyburi. He doesn&#8217;t know who set it up, and doesn&#8217;t worry about it. He believes the insurgents are gone from Rutbah, in western Anbar province.

"Our city is clean, not like before," he said.

Compared to the first four years of the war, when Rutbah was a haven for al-Qaida in Iraq and foreign fighters, it is.

U.S. troops periodically cleared the city of terrorists, but residents describe it as a war zone where city leaders were assassinated and people were randomly killed on the streets.

"The only coalition presence was leaflets that were dropped out of helicopters," said Lt. Col. Geoff Rollins, commanding officer of the 2nd Battalion, 25th Marine Regiment. "This was like the Wild, Wild West in the late 1800s in the United States."

Today, war-weary Rutbah has largely returned to normal. The market bustles with fruit and vegetable vendors. The fledgling city council that once met in secret, if at all, holds regular meetings that are broadcast on the city&#8217;s new radio station. And the 5-foot-high berm set up around the city to keep insurgents from leaving now keeps them from coming in, Rollins said.

"The biggest thing you have to do in a counterinsurgency is separate the population from the insurgents, and the coalition did that," he said. "It&#8217;s not just tracking down the bad guys."

The Marines, who haven&#8217;t traded a shot with insurgents since last summer, began the "disengagement" phase of their combat operations in Rutbah on Feb. 15.

Today, there&#8217;s a grudging acceptance of the American presence among the 20,000 residents of this lonely desert city. They welcome the calm.

"They just want to be safe. They are tired because of the bombs and killings," said Dr. Dhea Mijwal, director of the city&#8217;s hospital, which was bombed in the first days of the U.S. invasion.

Tiny Rutbah and the 4,000 square miles of sand around it are critical to maintaining security in the rest of the country. The region borders three countries &#8212; Syria, Jordan, and Saudi Arabia &#8212; and is crisscrossed by centuries-old trade routes now used for smuggling oil and drugs.

The religiously conservative area, about the size of South Carolina and heavily Sunni, is also a pathway for insurgents entering the country.

U.S. and Iraqi officials say most of the al-Qaida fighters who used to operate inside the city have fled into the desert, though they occasionally find bombs and weapons caches scattered throughout the region.

In November, U.S. and Iraqi forces tracked down and killed four insurgents, all but one from outside Iraq, after they stole a valuable flock of 1,500 sheep. They caught the insurgents by following the trail of sheep droppings across the desert.

"I think they are finished," Attallah al Kaybasi, a carpet salesman in downtown Rutbah, said of al-Qaida.

Residents say the turnaround in security started in the summer of 2007, when the Marines at Camp Korean Village and a handful of nearby outposts began stepping up their presence in the city. Today, only a trace of the insurgency remains, and their targets are usually those trying to rebuild the city &#8212; Iraqi police and city workers.

Mohammed Nori, the city&#8217;s engineering director, said his car was covered in gasoline and burned in front of his house about a month ago. He blames insurgents, though police say they don&#8217;t know who did it.

"No one can stop me from doing my work," Nori said.

Much of the Marines&#8217; work now focuses on strengthening the Iraqi security forces and Rutbah&#8217;s young city council, a mix of 20 university-educated and illiterate men who were appointed by the government.

Rutbah will hold its first city council elections this summer. Three of the ten slots will be reserved for women, who, in this conservative Sunni region, rarely speak to men outside their family. The town&#8217;s spotty electricity and running water are expected to be hot-button issues.

Many here have mixed feelings about the Americans. They don&#8217;t think the region&#8217;s police and army are strong enough to protect the region on their own, and they want the added security that the U.S. troops provide. But they see the Americans as an occupying force and want them to leave.

But the insurgents fell out of favor with residents because they were too aggressive, Awwad said.

Opinions about the Americans have improved dramatically in the past six months, as security improved and Iraqis began visibly taking control of the city, said Awwad, who was a lieutenant colonel and helicopter pilot in the Iraqi army when the U.S. invaded Iraq.

He didn&#8217;t fight in the war &#8212; the Iraqis destroyed some of their aircraft before the Americans could &#8212; and said he works with the Americans because he is loyal to Iraq, and they want to improve the country, unlike Hussein.

"We cannot have any progress for our country without your help," he said.