Rusting in DMZ, train is symbol of Korean War 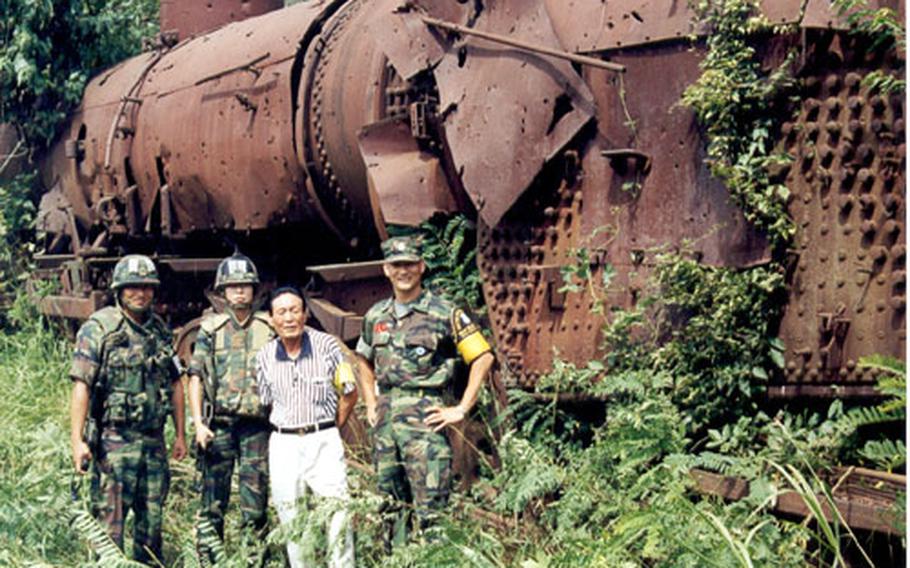 Han Joon-ki poses near his steam engine, which was destroyed by U.S. soldiers in a machine-gun barrage during the Korean War. For 52 years the train has rested in the Demilitarized Zone. (Photo courtesy of Han Joon-ki)

Han Joon-ki poses near his steam engine, which was destroyed by U.S. soldiers in a machine-gun barrage during the Korean War. For 52 years the train has rested in the Demilitarized Zone. (Photo courtesy of Han Joon-ki) Han Joon-ki stands near a steam-powered engine in 1946 in Seoul. (Photo courtesy of Han Joon-ki) 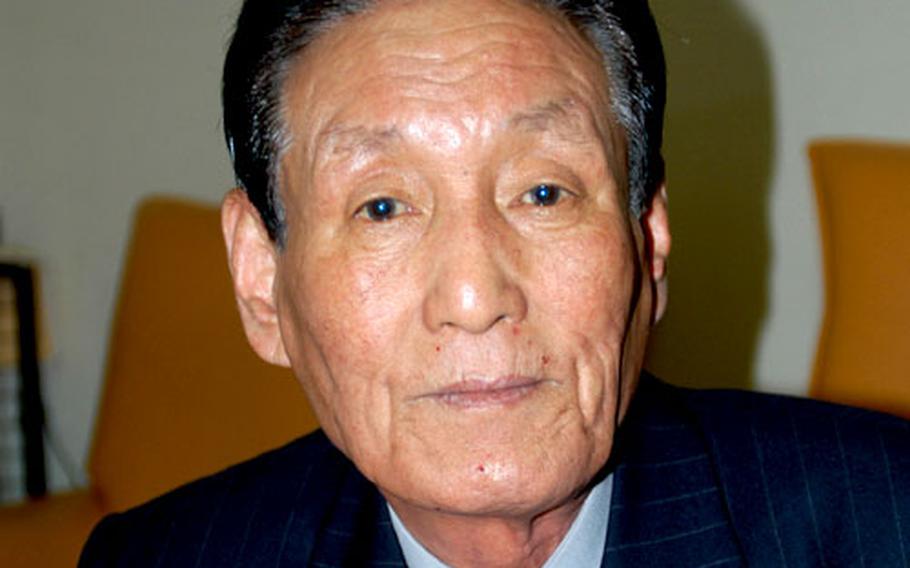 “I feel so bad, so hurt,” says Han Joon-ki about the fate of his old train, now rusting in the DMZ. (Jeremy Kirk / S&S)

ANSAN, South Korea &#8212; Close to new railroad tracks that eventually are to link North and South Korea, the heart of Han Joon-ki lies rusting and bullet-riddled in the woodsy Demilitarized Zone.

Idle for 52 years, his old steam-powered, coal-fired train is an enduring &#8212; if decrepit &#8212; symbol of the three-year Korean War, which killed more than 1 million and divided the peninsula. It lies in state in the DMZ, the border zone created by the 1953 armistice that ended the fighting.

Han&#8217;s train hauled ammunition, tanks and troops to the front lines during fighting in the fall of 1950.

U.N. troops, led by Gen. Douglas MacArthur, turned the war&#8217;s tide in September 1950 with a successful landing at Incheon, a port city. They drove deep into North Korea &#8212; and Han brought supplies to those thin lines.

The Korean War came just as Koreans were enjoying their new self-rule after a brutal 35-year Japanese colonization. For Han, it came just two years after he&#8217;d first set foot in the land of his parents.

Han was born in Japan in 1927 after his parents moved there from an impoverished Korea. He began working for Japan Railways in 1943, eventually, he said, becoming Japan&#8217;s only Korean train operator.

He ran trains in the industrial city of Nagasaki. On Aug. 9, 1945, he was asleep there, in a Japan Railways dorm room, when he heard a huge explosion.

Then his building collapsed. A B-29 bomber had just dropped the &#8220;Fat Man&#8221; atomic bomb, powered by 13.6 pounds of plutonium, generating an explosion equivalent to 21,000 tons of dynamite. It killed or injured tens of thousands while setting the city ablaze.

The Korea National Railroad hired him in February 1946.

Over the next few years, U.S. soldiers, stationed in Korea to organize the surrender and withdrawal of Japanese troops, slowly pulled out. By 1948, only a small U.S. presence remained. Syngman Rhee was elected Republic of Korea president in July 1948, and the Soviet Union was positioning Kim Il Sung as North Korea&#8217;s leader.

Han said he wasn&#8217;t very aware of what was happening.

&#8220;There were some instances of North Koreans crossing the line, but we had no idea there was going to be a war,&#8221; he said. &#8220;Right after we set up our government, all of the U.S. soldiers pulled out of the country. If there were some U.S. soldiers here, there would have been no such war.&#8221;

Han, living in Seoul, caught his first glimpse of the conflict when he saw tanks driving around the capital. He thought they belonged to the United States or to other friendly nations, he said. Then, during a train stop at Seoul station, a friend told him they were North Korean.

On June 28, 1950 &#8212; three days after the war started &#8212; Han heard an explosion while operating a train near Yongsan Station. While heading toward the Han River, he noticed the tracks were bent. South Korean soldiers had destroyed the rail bridge to stop North Korea&#8217;s advance.

Han said if he hadn&#8217;t noticed the bent tracks, he and his train would have plunged into the river.

In following months, U.N. forces mounted a campaign that reached all the way to the Yalu River on North Korea&#8217;s border with China. Han made runs to Pyongyang with supplies. He rarely saw fighting but saw its effect: North Koreans would climb atop his train, knowing they could take it southward.

U.S. soldiers tried to keep them off the train, Han said. Many people were killed because they fell off, he said, recalling seeing bodies during the journey southward.

In October 1950, more than 300,000 Chinese soldiers entered the war and pressured U.N. forces to retreat. By December, U.N. forces had been repelled southward.

Han made a supply run to the North Korean city of Hampo on Dec. 31 and was trying to return to Munsan at night. But his train, running backward because there was nowhere to turn it around at Hampo, halted at a Jangdan station, a long-gone stop in what now is the DMZ.

Han and two other crewmembers got off to find out why the train was delayed. About 20 U.S. soldiers then unleashed a machine-gun barrage on his engine, destroying it. Han said he was dumbfounded.

He later learned that U.N. forces were afraid the train, seized earlier from the North Koreans, would fall into their hands again.

The train has sat in the DMZ just west of Panmunjom &#8212; the village straddling the official border between the two countries. It&#8217;s rusted, full of holes and appears gutted.

South of the DMZ, at the small tourist area of Imjingak, is a full-size refurbished steam train on tracks. The inscription implores the Koreas to come together and let the train run again.

After 50 years of division, in June 2000, there was a suggestion that dream could come true. South Korean President Kim Dae-jung met North Korean leader Kim Jong Il, the first meeting ever between leaders of the Koreas.

To promote trade and good relations, the two agreed to connect again a cross-border railway and build a highway.

But the project now is almost two years behind schedule. Although South Korea&#8217;s portion is near completion, with new track laid a short way from Han&#8217;s rusting train, North Korea has lagged on its half. And unification again seems more distant: North Korea also has asserted its right to restart its nuclear program.

That the impoverished North could finance nuclear weapons seems unlikely, Hans speculated. But the atomic survivor nonetheless forecast a dark outcome to any North Korean nuclear ambitions on the Korean peninsula.