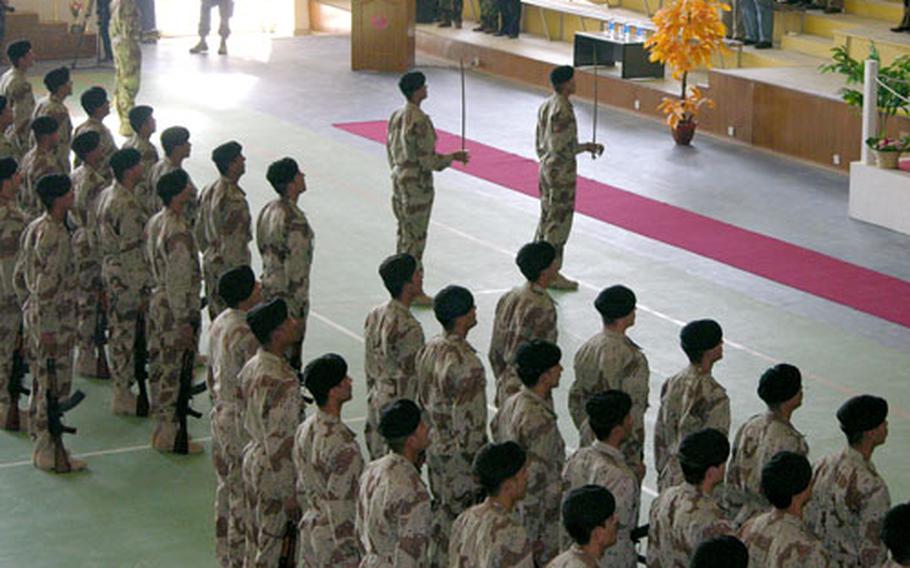 TIKRIT, Iraq &#8211; Members of the first class of cadets from the new Iraqi Military Academy at Rustamiyah graduated last week and pinned on the rank of second lieutenant in the Iraqi army, U.S. military officials said Friday.

Seventy-three Iraqis graduated from the 52-week course of intensive training, making them the closest thing the new Iraqi army has to West Point graduates. U.S. military officials touted the graduation, held Thursday before a small group of dignitaries at the academy, as a major step forward for the fledgling Iraqi security forces.

&#8220;Today&#8217;s graduates are truly ready to be leaders in the Iraqi Army,&#8221; U.S. Army Maj. Joseph Brunetti, assistant chief instructor at the academy, said in a military news release.

The training of a reconstituted Iraqi army is the cornerstone of the U.S. exit strategy from a war nearing the end of its third full year. U.S. officials say more than 200,000 members of the Iraqi security forces have been trained, although they acknowledge that the levels of proficiency and battle readiness vary greatly between the Iraqi units.

At last week&#8217;s transfer of authority ceremony in Baghdad, Lt. Gen. John Vines, outgoing commander of Multi-National Corps- Iraq, said Iraqi forces had made great strides in the past year. But he also said that, as the political process moves forward, Iraqi security forces are being targeted more frequently by insurgents who want to stop any progress.

&#8220;[The insurgents] realize the ISF are the long-term threat to them, and we have already seen a shift&#8221; to more attacks on police and army troops, rather than on political targets, Vines said in a brief interview after the ceremony.

Vines rejected calls for more foreign troops in Iraq, whether American or from other Arab nations.

The 73 members of the first graduating class of IMAR, as the academy is known in its military acronym, will take positions as junior officers in units throughout the Iraqi army, officials said.