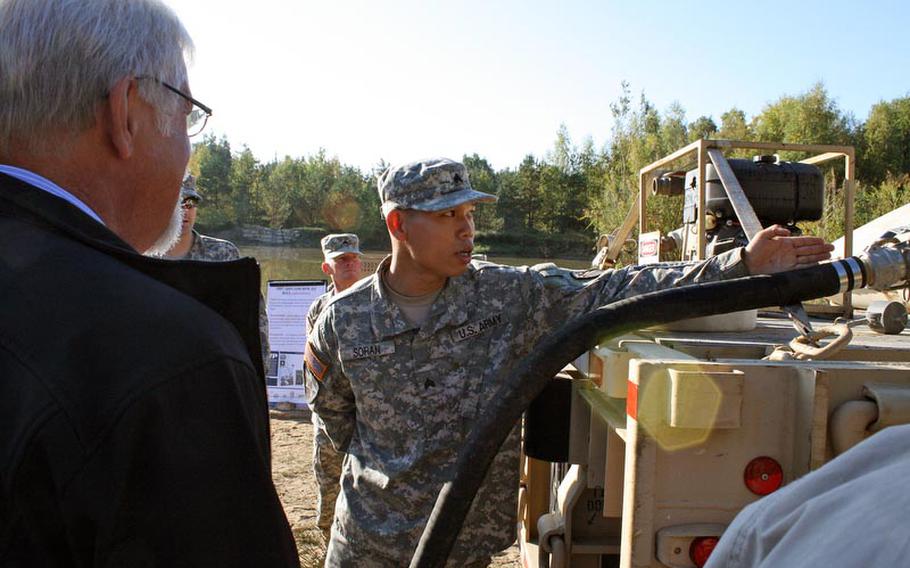 Buy Photo
Sgt. Winarto Sofian, a water purification specialist, demonstrates how the U.S. Army keeps a clean water supply during a meeting with NATO members in Stuttgart. U.S. European Command hosted the conference, which included a delegation from Russia. The meetings focused on ways to bolster cooperation and ensure that countries&#39; logistical systems can operate together. (John Vandiver/Stars and Stripes)

STUTTGART, Germany &mdash; A delegation from Moscow made a rare appearance at U.S. European Command headquarters this week for three days of meetings with their U.S. and NATO counterparts to talk about coordinating logistical support in a crisis.

NATO and Russia have long been at odds on numerous key issues, such as the alliance&rsquo;s plans for missile defense in Europe, but logistics is an area where the two seem to be able to work together.

Officials from EUCOM, NATO and Russia, meeting in Stuttgart on Friday, examined ways to coordinate delivery of essential supplies in a crisis, such as providing clean water to troops in the field, or civilians during a natural disaster.

The NATO-Russia Council water workshop concentrated on ways to make sure that water pumping equipment from partner nations can operate together and standards for water sanitization match.

Last year, EUCOM troops along with NATO members and Russian officials held similar meetings in Prague. This week&rsquo;s meeting was the latest in a series leading up to a large, multinational exercise dubbed Capable Logistician 2013, which will focus on the best practices for fuel and water handling.

&ldquo;Russia is an important country, and it has a big military,&rdquo; Parrott said. &ldquo;It makes sense to work with them.&rdquo;

Russia has been invited to take part in the 2013 exercise, EUCOM officials said.

Members of the Russian delegation declined to comment Friday on whether they would participate.