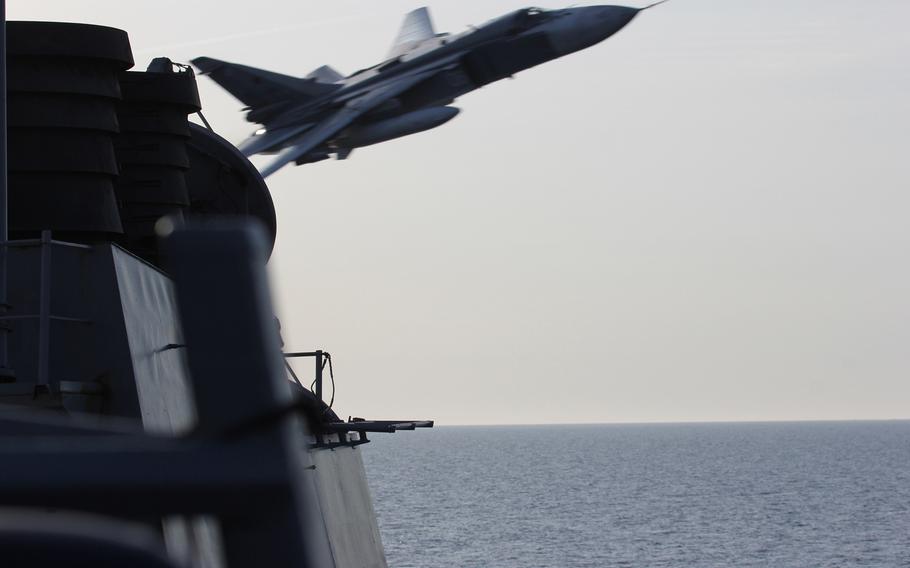 A Russian Sukhoi Su-24 attack jet makes a low altitude pass by the USS Donald Cook on April 12, 2016. A Russian jet and a U.S. jet had a near miss over Syria recently, the Pentagon said Friday, Oct. 28. (U.S. Navy)

WASHINGTON — A Russian fighter jet and a larger U.S. aircraft came within about a half mile of colliding in mid-air nearly two weeks ago during a night mission over Syria, the Pentagon said Friday.

“The Russian jet passed in front of the coalition jet close enough that the jet wash from that flight was felt within the larger aircraft,” said Col. John Dorrian, a Baghdad-based spokesman for Operation Inherent Resolve.

However, Dorrian would not provide additional details on what kind of coalition aircraft was involved in the near crash on Oct. 17.

A separate defense official confirmed to Stars and Stripes on the condition of anonymity that the coalition aircraft was flown by the United States.

Russian, U.S. and coalition aircraft have operated in the same Syrian air space since September 2015. Later that fall, Russia and the United States established a contact system in which they could notified each other of areas where their pilots would be flying to avoid collisions. The regular phone calls between operations centers have continued even as official diplomatic talks over a ceasefire in Syria have stalled.

Dorrian said there was immediate contact between the two aircraft moments after the Oct. 17 incident and then a follow-up call between the command centers. He said U.S. Central Command does not think the near crash was an intentional act by the Russian aircraft.

Dorrian said the issue was not made public immediately to avoid escalation of the incident.

The contact system is intended “to keep the temperature down between us and the Russians in that very crowded and confused at times battle space,” Dorrian said.