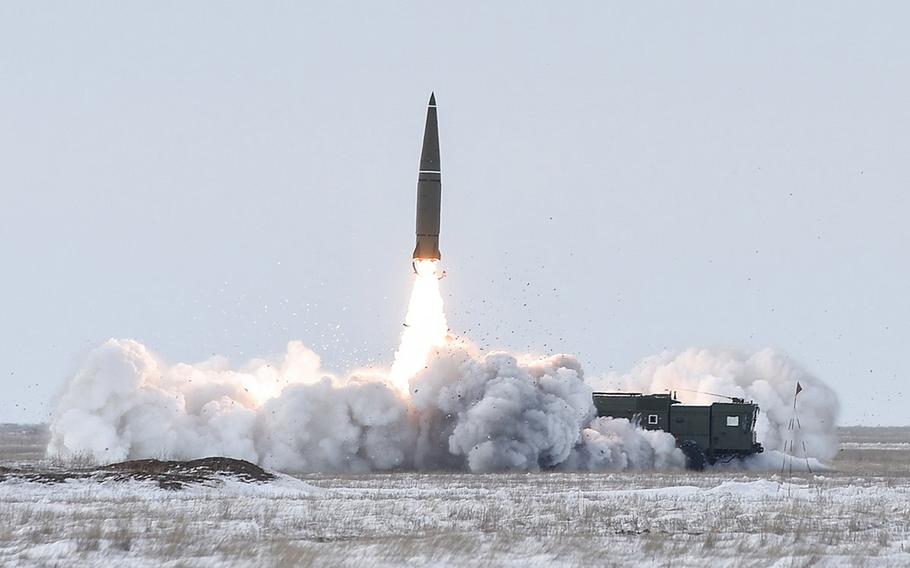 The Russian military tests launch an Iskander-M ballistic missile at the Kapustin Yar complex in March 2018. More than 8,000 Russian troops, including Iskander crews, were placed on alert Monday, Aug. 26, 2019, as military drills kicked off around the Black Sea. (Russian Defense Ministry)

STUTTGART, Germany — More than 8,000 Russian troops, including ballistic missile crews, were placed on alert Monday as large-scale military drills kicked off around the Black Sea, a region where tensions have been high between Moscow and U.S. allies.

Five days of war games being held in southern Russia will involve land, air and naval forces conducting live-fire exercises at 12 different ranges, Russian media reported. The training will include more than 100 tanks, 30 aircraft, 60 helicopters and up to 10 warships from the Black Sea Fleet and the Caspian Flotilla.

Also taking part in the exercises are Iskander-M missile system crews, which were placed on alert as they practiced “delivering a massive missile strike against the notional enemy’s command posts and other strategically important installations,” state media quoted the Russian military as saying.

The drills come amid international concern that Washington and Moscow could be in the early stages of a new arms race focused on building up medium-range missile capabilities.

Earlier this month, the U.S. announced its official withdrawal from a key nuclear missile treaty with Russia. The U.S. blamed Moscow for violating the terms of the 1987 Intermediate-Range Nuclear Forces Treaty and vowed to build new weapons previously banned under the agreement.

And on Aug. 18, the U.S. tested a modified ground-launched Tomahawk cruise missile, a system that would have been banned under the now defunct treaty.

Meanwhile, the ongoing Russian exercise in the Black Sea region is also showcasing Moscow’s control of the Crimea Peninsula. In 2014, Russia seized the territory from Ukraine, which in turn sparked NATO’s own military buildup in Europe over worries about a more aggressive Russia.

As the exercises kicked off on Monday, Sukhoi Su-30SM fighter jets fired missiles at range targets in Crimea, where they rehearsed an attack on a notional enemy, state media reported, citing the Black Sea Fleet’s press office.

The fighters scrambled to “intercept and destroy a notional enemy’s air targets and practiced a set of measures to search for, detect and destroy aerial flare targets by air-to-air missiles,” the Black Sea Fleet said in a statement.