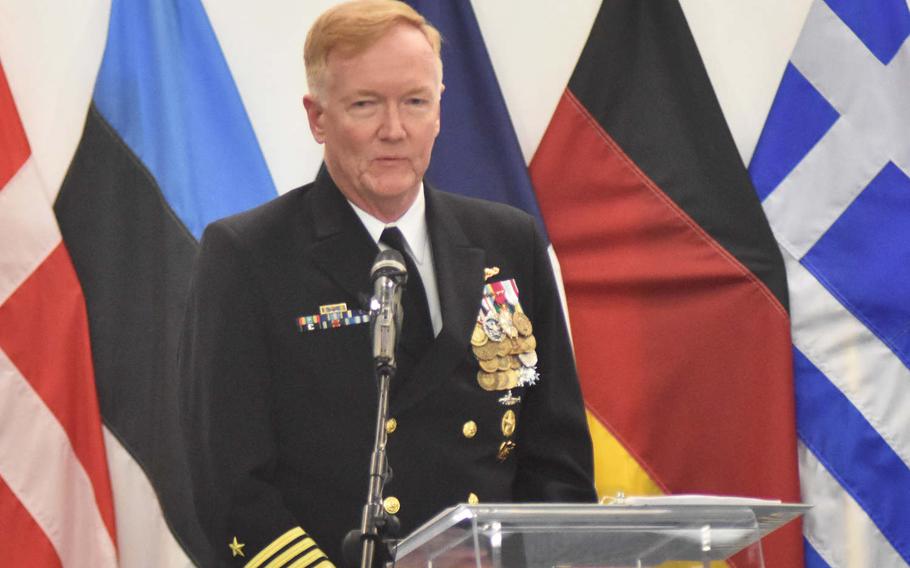 Buy Photo
Adm. James Foggo speaks at Allied Joint Force Command Naples, Italy, on Oct. 20, 2018, when he took command of Naval Forces Europe and Africa. Foggo says Russia's growing submarine forces in the theater are a threat that NATO must contend with as it redefines its mission in the post-Cold War era. (Scott Wyland/Stars and Stripes)

Buy Photo
Adm. James Foggo speaks at Allied Joint Force Command Naples, Italy, on Oct. 20, 2018, when he took command of Naval Forces Europe and Africa. Foggo says Russia's growing submarine forces in the theater are a threat that NATO must contend with as it redefines its mission in the post-Cold War era. (Scott Wyland/Stars and Stripes) 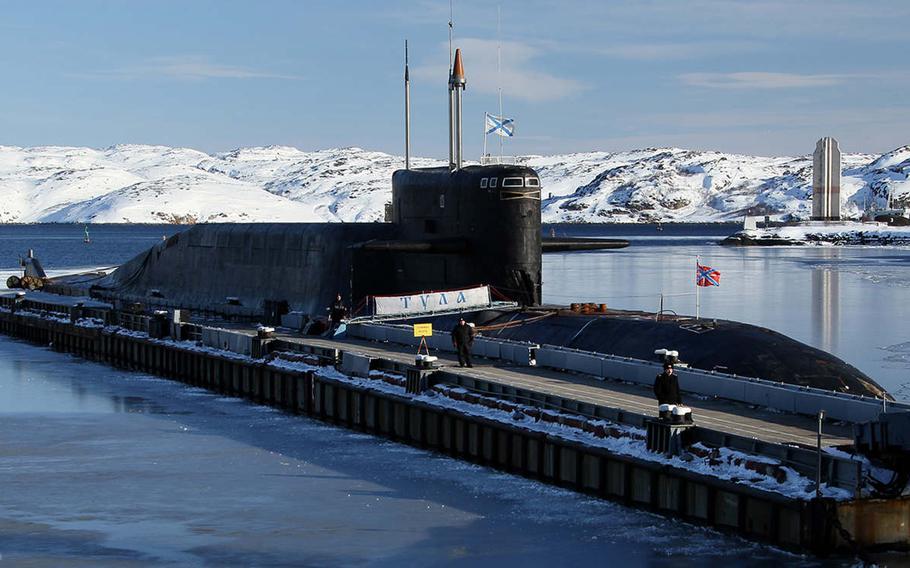 Russian submarines such as the Tula are increasingly active in the Mediterranean, Black Sea and North Atlantic. Adm. James Foggo has observed Russia expanding its submarine presence in the European theater in the past several years. (Russian Defense Ministry)

NAPLES, Italy — Russia is deploying more submarines to the Mediterranean, the Black Sea and North Atlantic than at any time since the Cold War as part of a growing power game driving the U.S. to revive a decommissioned fleet and NATO to strengthen its naval defenses, the Navy’s top commander in the theater said.

Russia is upgrading its submarine forces and improving their missile capabilities, all while relations between Moscow and NATO remain tense over Russia’s annexation of Ukraine’s Crimean Peninsula in 2014, Adm. James Foggo, commander of U.S. Naval Forces Europe and Africa, said in an interview earlier this month.

“The illegal annexation of Crimea … that certainly has put a strain on our relationship,” Foggo told Stars and Stripes. “It’s their bad behavior, not ours. It’s the things they are doing.”

The Navy is reviving 2nd Fleet, though on a smaller scale than the one deactivated in 2011, to supply more ships in what Foggo described as growing competition between Russia and NATO in the Atlantic Ocean.

The renewed 2nd Fleet will be a Norfolk, Va.-based joint forces command, with many details yet to be worked out, Foggo said, adding that Navy leaders will know more after NATO’s July summit in Brussels.

Foggo said he’s impressed with the missile-launching ability of Russian submarines, such as the Kilo-class boats deployed to the Mediterranean and the Black Sea. These diesel-electric submarines carry as many as 18 torpedoes and eight surface-to-air missiles.

Some Russian submarine missiles have the range to reach any European capital, Foggo said.

“So I think it’s important for us to have the situational awareness of where those platforms are operating at all times,” Foggo said. “We have seen the Kalibr missile launches from their platforms into targets in Syria. (It) is a very capable weapon system.”

The U.S. has the means to combat Russian submarines – with P-8 Poseidons from the air, Arleigh Burke-class destroyers from the surface and U.S. nuclear-powered submarines underwater, Foggo said.

Nearly all of NATO’s 29 countries have navies to assist in anti-submarine warfare, most notably Germany, which, despite recent setbacks, has some of the best submarines in the world, Foggo said.

Late last year, Germany had no working submarines because five were either being repaired or were in extended maintenance, and one was still being built.

Russia’s surface fleet development lags behind its undersea forces, Foggo said. It has begun to build smaller, faster warships with high-tech weaponry but has yet to build an aircraft carrier that rivals U.S. carriers, he said.

The Navy’s fleet of fast-attack submarines is scheduled to dwindle from 52 to 42 by 2028, according to an April Congressional Research Service report, as Cold War-era boats reach their decommissioning dates.

Now the U.S. must build more submarines in response to Russia’s resurgent forces, said Tomas Valasek, director of Carnegie Europe, a think tank focused on security based in Brussels.

Russia began deploying more naval forces into the Mediterranean after its relations with NATO turned more adversarial in 2014, Foggo said.

In March, U.S. European Commander Gen. Curtis Scaparrotti testified before Congress that Russian submarines were deploying more often and “are being modernized, particularly with their weapons systems.”

Some of the increased activity stems from the Russian navy becoming more active in its longtime Tartus base on the Syrian coast, Foggo said.

The increased Russian naval presence in the busy Mediterranean “raises the possibility that there could be a mistake or miscalculation,” Foggo said.

Russian and Pentagon leaders have met once a year since the early 1970s to exchange grievances about naval incidents deemed unsafe or unprofessional, Foggo said.

Since 2014, this yearly sit-down has become the only formal discussion between the two navies, he said, which makes it harder to prevent misunderstandings.

“I hope that will change in the future,” Foggo said.