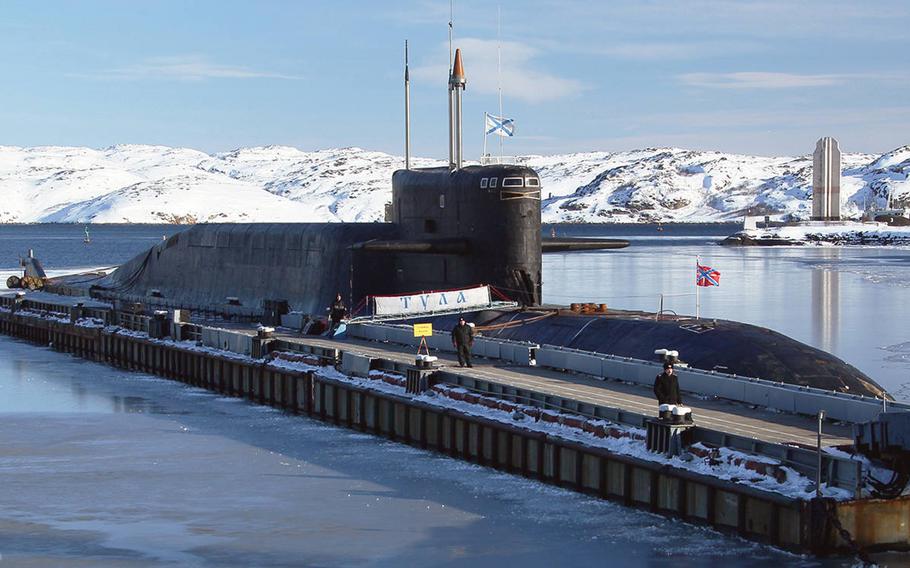 Russian submarines such as the Tula are increasingly active in the North Atlantic. (Courtesy of the Ministry of Defense of the Russian Federation)

STUTTGART, Germany — Russia submarine activity is at its highest levels since the 1980s as Moscow continues to invest heavily in its maritime capabilities, the top military commander in Europe said Thursday.

While the U.S. remains dominant undersea, more investment will be needed to keep that edge, Scaparrotti told the House Armed Services Committee.

The Navy’s fleet of fast-attack submarines is scheduled to dwindle from 52 to 42 by 2028, according to the Congressional Research Service, as Cold War-era boats reach their decommissioning dates.

The number wouldn’t rise back to 52 until the 2030s under current estimates, even as the Navy plans to order two new Virginia-class submarines annually and considers extending the life of some of its aging Los Angeles-class subs.

In Europe, a more aggressive Russia is challenging the U.S. and its allies in conventional military ways that recall the Cold War, as well as with newer electronic methods.

For U.S. European Command, much of the focus has centered on deterring traditional threats.

U.S. patrols in the Black Sea have doubled, brigades are rotating regularly along NATO’s eastern flank and efforts are underway to ensure the faster movement of forces in Europe, Scaparrotti said.

EUCOM would benefit from more permanently based forces to deter Russia, such as a fires and aviation brigade, Scaparrotti said.

Still, much of the challenge lies outside traditional military areas of operation, such as Russian information operations that seek to undermine the West and NATO, the general said.

EUCOM has a relatively new command group focused on disinformation, but more coordination across the U.S. government is needed to deal with the threat, Scaparrotti said.

While Russia poses a conventional military threat, “the one big area where they are acting on a consistent basis is their disinformation, cyber campaign,” Rep. Adam Smith, D-Wash., said. “We are barely on the playing field at this point.”

“We need a more robust effort,” Scaparrotti said regarding a cyber campaign, but added that such an effort would be led by the State Department.

“Right now the State Department is not in a good place,” Smith replied.

Meanwhile, it is too early to tell if the recent U.S. decision to provide lethal arms to Ukraine is altering Russia’s calculus when it comes to backing separatists in the country’s east.

“Ukraine is in what I would consider a hot fight right now, not a frozen conflict,” Scaparrotti said. “It is not my belief Russia wants to resolve this conflict at this point.”