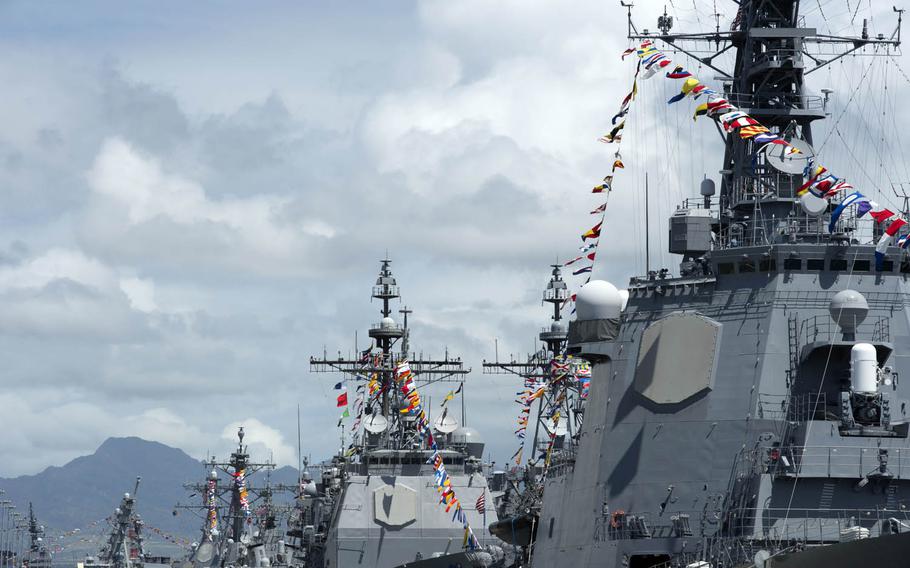 Ships moored at Joint Base Pearl Harbor-Hickam, Hawaii, display maritime signal pennants and flags from their masts during Rim of the Pacific 2016 on Monday, July 4, 2016. Twenty-six nations, more than 40 ships and submarines, more than 200 aircraft and 25,000 personnel are participating in RIMPAC through Aug. 4 in and around the Hawaiian Islands and Southern California. (Jeff Troutman/U.S. Navy)

A Russian spy ship has been detected off Hawaii amid preparations for U.S. Navy-led Rim of the Pacific exercises, according to the Pacific Fleet.

“The ship’s presence has not affected the conduct of the exercise, and we’ve taken all precautions necessary to protect our critical information,” he said.

The participation of 26 nations, with nearly 50 ships, more than 200 aircraft and 25,000 personnel, makes RIMPAC a tempting target for the Russians to monitor.

James Brown, an international affairs expert at Temple University’s Japan campus, said the spy ship is likely based in Vladivostock, home port for the bulk of Russian military forces in the Far East.

Experts contacted by USNI News speculated the vessel could be the Pribaltika, which is able to intercept and record communications and electronic emissions such as radar.

“The Russians have been investing more in their Pacific fleet, and this is likely one of their advanced vessels,” Brown said.

The ship’s presence off Hawaii sends a message about Russia’s capabilities in response to U.S. operations near its airspace and waters, he said.

Russia last participated in RIMPAC in 2012 but declined an invitation in 2014, the year in which it annexed Ukraine’s Crimea Peninsula, leading to a split with the West. Russia wasn’t invited to this year’s drills, Brown said.

“I suppose they want to show that they are watching anyway,” he said.

The sighting comes after a Russian naval incursion into Japanese waters around the Senkaku Islands last month. Chinese ships followed the Russians into the disputed waters, raising fears that the two nations were coordinating, Brown said.

The Chinese People’s Liberation Army Navy, which is participating in RIMPAC 2016, sent its own spy ship to Hawaii in 2014 along with four other vessels that had been invited to the exercise.

RIMPAC is a test bed for all sorts of things beyond what’s obvious, such as missile launches, he said.

“It’s operability and networking,” Babbage said. “The Russians will see it as a target-rich environment in terms of intelligence. They will be able to monitor a lot of electronic transmissions and they will find that pretty useful. It’s the biggest naval exercise globally by a long shot and they want to know what’s going on.”

The Russians are within their rights to operate in international waters, so RIMPAC participants need to control electronic emissions, he said.

Intelligence operations are being conducted at a rate not seen since the Cold War, when Russians would routinely send ships to spy on U.S. military exercises, Babbage said.