Russian navy to join hunt for terrorists in Mediterranean 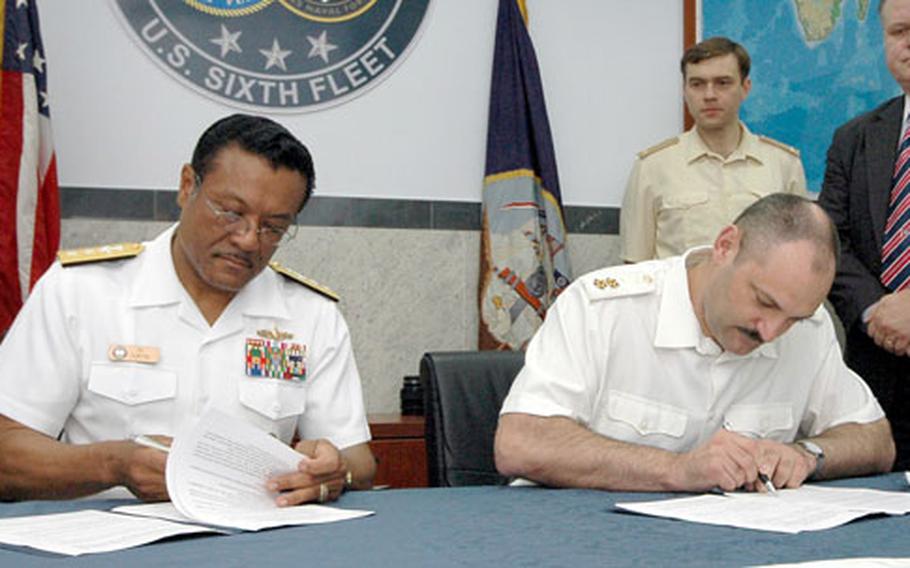 Until now, the Russian navy has taken part only in training in the Mediterranean. But starting in August, the Russian frigate Pytlivyy will partner with multinational navies in Active Endeavor &#8212; launched in the wake of the Sept. 11, 2001, terror attacks &#8212; which targets terrorists, human traffickers, and drug and weapons smugglers.

Avdoshin made the announcement Thursday afternoon during a news conference. He and U.S. Navy Rear Adm. D.C. Curtis, director of Navy Europe Programs, Resources, and Support, are wrapping up four days of meetings, required to be held annually because of the 1972 Incidents at Sea Treaty.

Topping such meeting agendas, as the name states, are discussions of any incidents that might have happened at sea between Russian and U.S. vessels. Last year there were none. The leaders said they took advantage of this week&#8217;s talks held in Naples to discuss military-to-military naval relationships and future ventures.

For example, next year the two navies plan to hold more ship-to-ship visits.

During the meetings, the two sides also discussed Russia&#8217;s participation in Task Force Guam, and continued involvement in training in Norwegian waters, both leaders said.

Also, both countries&#8217; respective naval war colleges will be teaching each others&#8217; officers, Curtis said.

The Russian navy is leading the charge of having non-NATO nations join in Active Endeavor. Other countries include Algeria, Egypt, Israel, Jordan, Morocco and Tunisia.

After the Sept. 11 attacks, NATO enacted Article 5 of the Washington Treaty, which committed its forces to the fight against terrorism. Active Endeavor started with patrols and escorts of vessels transiting the Straits of Gibraltar and the Suez Canal.

In October 2004, it expanded to patrols of the entire Mediterranean, particularly in waters near the Middle East.