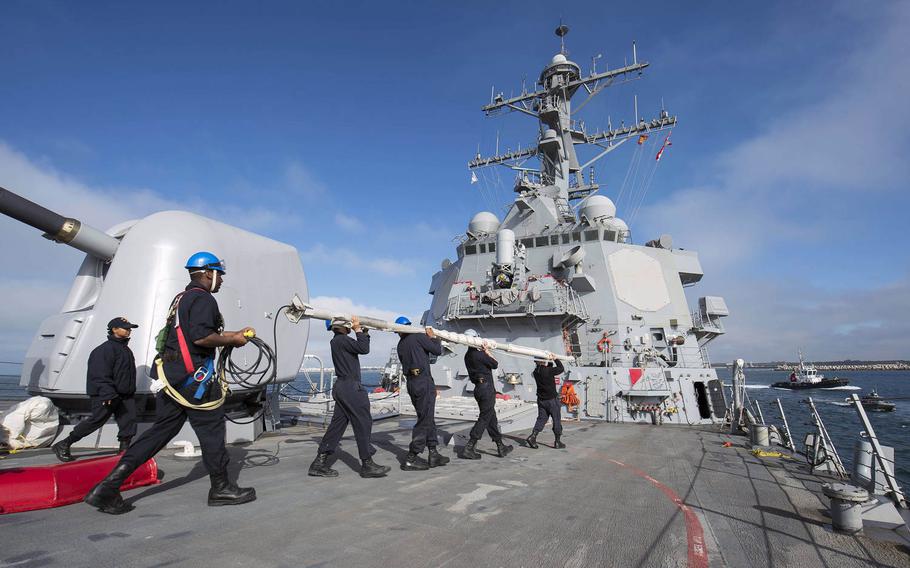 NAPLES, Italy — The addition of a new weapon on a warship already bristling with advanced systems might not seem like a big deal for the U.S. Navy in Europe.

But when engineers working aboard the Spain-based destroyer USS Porter installed a missile-launcher that can autonomously track and destroy incoming anti-ship missiles earlier this year, it was an acknowledgment of a shift in this theater: For the first time in post-Cold War Europe, the Navy must account for an adversary capable of threatening its ships with modern weapons — Russia.

The Naples-based U.S. 6th Fleet made an urgent request last year to acquire the missile-launcher, the SeaRAM Close-In Weapon System, for installation on the Porter and three other destroyers based in Rota, Spain. Their concern is the advanced anti-ship cruise missiles being installed by Russia on its surface ships, aircraft, submarines and coastal defense sites.

Still modernizing from its post-Soviet disrepair, the Russian fleet lacks the blue-water capability of the U.S. Navy. But by raising the stakes of confrontation with one of its ships, aircraft or submarines, it can try to alter the Navy’s behavior in contested waters like the North Atlantic and Mediterranean.

The Russian navy is in the middle of an ambitious shipbuilding program that includes a new guided-missile corvette and two new classes of guided-missile frigates. It has already stationed the first two of a planned six new ultra-quiet diesel Kilo-class submarines in the Black Sea, one of which fired land-attack cruise missiles at Syrian rebel targets from the Eastern Mediterranean last year.

“That sort of got people’s attention, as was precisely the intent,” said Dmitry Gorenburg, a naval analyst at CNA Corp.

The military calls this strategy Anti-Access, Area Denial, or A2/AD, in which the presence of long-range precision-guided missiles forces an adversary to operate further from shore or regional waters. The Navy considers it a challenge to freedom of navigation and its ability to project power from the sea.

The Pentagon first mentioned A2/AD several years ago to describe China’s fielding of large quantities of anti-ship missiles near sensitive areas. Yet recent tensions in Europe, with Russia’s annexation of Ukraine’s Crimea Peninsula in 2014 and its support for separatists in eastern Ukraine have made it relevant to U.S. forces here.

A 2015 Office of Naval Intelligence report said the emphasis on missiles in Russia’s new shipbuilding — in particular the Kalibr cruise missile being installed on all new submarines, corvettes, frigates and larger surface ships — is altering security in the region.

“The proliferation of this capability within the new Russian Navy is profoundly changing its ability to deter, threaten or destroy adversary targets,” the authors of the report wrote.

Anti-ship missiles are getting faster, with longer ranges and more countermeasures designed to penetrate advanced defenses, said Mike Kofman, another analyst at CNA Corp. Submarine- or aircraft-fired anti-ship missiles have a range of 400 to 500 kilometers (250 to 300 miles), he said. This means that a ship stationed at the Russian naval base at Sevastopol, in Crimea, can put much of the Black Sea at risk. A common design is a multi-stage missile, in which the warhead boosts from the missile body to supersonic speed before striking its target.

Defending a warship against cruise missiles is difficult. Although the Aegis air defense system in American guided-missile warships is designed to handle multiple incoming missiles at one time, an enemy will still try to overwhelm it through the number and launch direction of missiles, as well as countermeasures of its own.

That puts ships in a race to add more and better defense systems before sailing into contested waters.

“You want to have freedom of navigation, freedom of movement,” said Kofman. “The only way to believe you have that is if your ships are survivable.”

Which is where the SeaRAM comes in. The Navy tries to stack, or layer, defenses on a single ship to give it overlapping solutions for stopping an incoming missile. They include the SM-6 missile at long-range, the SM-2 and Evolved Seasparrow Missile at medium range and a Phalanx 20mm cannon Close-In Weapon System as the last line of defense.

First deployed on a ship seven years ago, SeaRAM offers a close-range option that extends beyond the 20mm cannon. Navy weapons managers turned to the SeaRAM last year after 6th Fleet requested a fast-track acquisition for a new defense system for the four ships. Although it had never been installed on a destroyer, the SeaRAM mount was similar enough to the cannon mount that engineers could swap the two on the ship’s aft, with some modifications.

A successful test fire last month capped the installation. It also proved how quickly the Navy could respond to an urgent request from fleet commanders — programmers needed just one year for a process that can take as long as five.

“We learned a lot of lessons about how we could do things faster,” said Capt. Mike Ladner, a program manager at Naval Sea Systems Command who oversees weapon systems for surface ships.

It may not be the last such request as the U.S. continues to look at defending its ships against cruise missiles, a threat only expected to grow in the future. Hypersonic missiles — those that can travel at over Mach 5, or five times the speed of sound — are a likely goal of Russian missile researchers, according to the Office of Naval Intelligence.

The Navy will seek to counter them at every step, Kofman said.

“This is a problem people are very much working hard on,” he said.