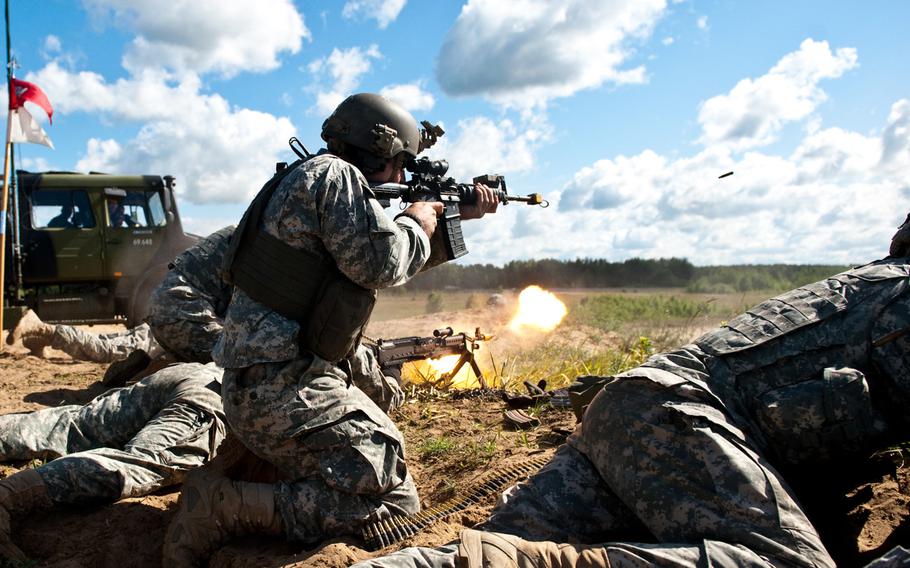 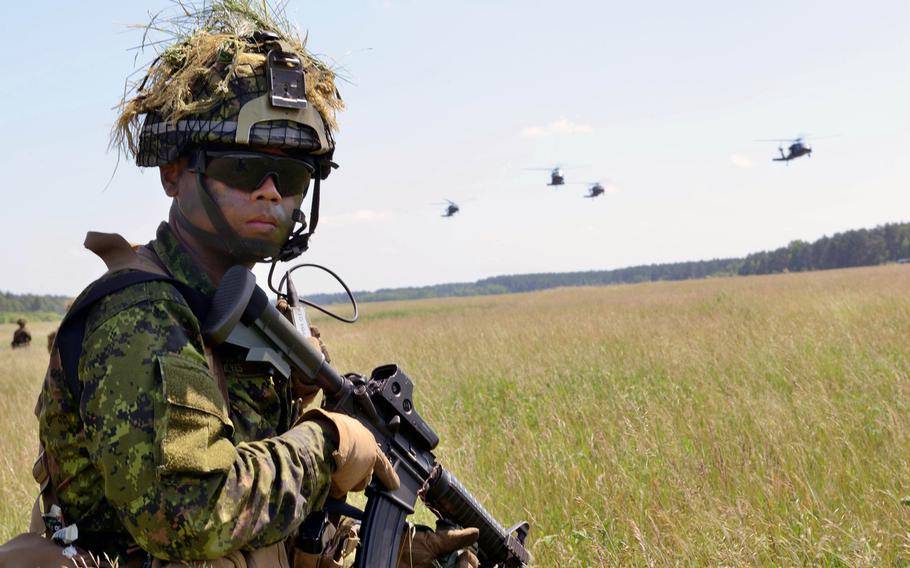 Private Derik Reyes of 3rd Battalion, Princess Patricia's Canadian Light Infantry secures the area during Exercise Saber Strike at the Drawsko Pomorskie training area in Poland on June 9, 2014. The exercise is being conducted primarily in the Baltics, but with some events in Poland. (Bern LeBlanc/Canadian Army)

KAISERSLAUTERN, Germany — NATO officers taking part in war games in the Baltics say that Russia’s surprise launch of military maneuvers nearby has not altered their plans for the Saber Strike exercise, which wraps up Friday.

“What Russia decides to do in response to a pre-planned exercise is beyond me,” said Maj. Gen. Mark McQueen, the American directing the war games, which are playing out in sites across Estonia, Latvia and Lithuania.

Soon after Saber Strike launched last week, Russia announced its own war games in response to the exercise in Kaliningrad, a tiny Russian enclave on the Baltic Sea that borders both Poland and Lithuania.

About 4,500 troops — including roughly 1,000 Americans — are participating in Saber Strike, making it the biggest exercise to bear that name since the series began in 2009.

NATO is seeking to maintain interoperability that member nations gained by working and fighting together for more than a decade in Afghanistan. As the war continues to wind down with the withdrawal of coalition combat forces, the alliance plans to maintain this ability by conducting frequent exercises and other joint training drills.

Planning for the maneuvers began almost a year ago, McQueen said — well before Russia annexed Crimea or amassed some 40,000 troops on Ukraine’s border.

McQueen and other officers involved in the exercise said they are primarily focused on building and maintaining interoperability among various regional and NATO militaries and didn’t have any particular potential aggressor in mind when planning Saber Strike.

Russia hasn’t seen it that way.

“We can’t take this military buildup by the alliance next to Russia’s borders as anything but a demonstration of hostile intention,” Russia’s Deputy Foreign Minister Vladimir Titov said last week as the U.S.-led exercise kicked off, according to Russia’s state-run Russia Today news service.

The Russian reaction “was, you know, interesting, but had no impact on our exercise,” McQueen said.

Russia’s actions in Ukraine, however, have had an effect on U.S. and NATO plans. A U.S.-led military exercise dubbed Rapid Trident, which was to hack kicked off in Ukraine in July, has been postponed. Meanwhile, participation in Saber Strike has swelled from about 2,000 last year to more than double that this year.

Canada, citing Russia’s actions in Ukraine, sent an additional 75 soldiers to augment the 45 troops it already planned to send to the maneuvers.

Capt. Austin Richardson, an officer in 3rd Battalion, Princess Patricia’s Canadian Light Infantry, is among those 75. He dismissed the notion that he and his men taking part in ground maneuvers in Latvia see themselves as a deterrent to Russia.

“This is just an exercise that had already been pre-planned,” Richardson said. The situation between Russia and Ukraine “is not really a topic that we kind of think about or talk about.”

The fictional scenarios Richardson and the other forces here are engaged in aren’t aimed at any particular nation, Maj. Gen. Almantas Leika, Lithuania’s land forces commander, said in an email response provided by a Lithuanian Defense Ministry spokesman.

The only reason it’s gotten more attention from the media and public this year, he said, is because of the “current situation” in this part of Europe.