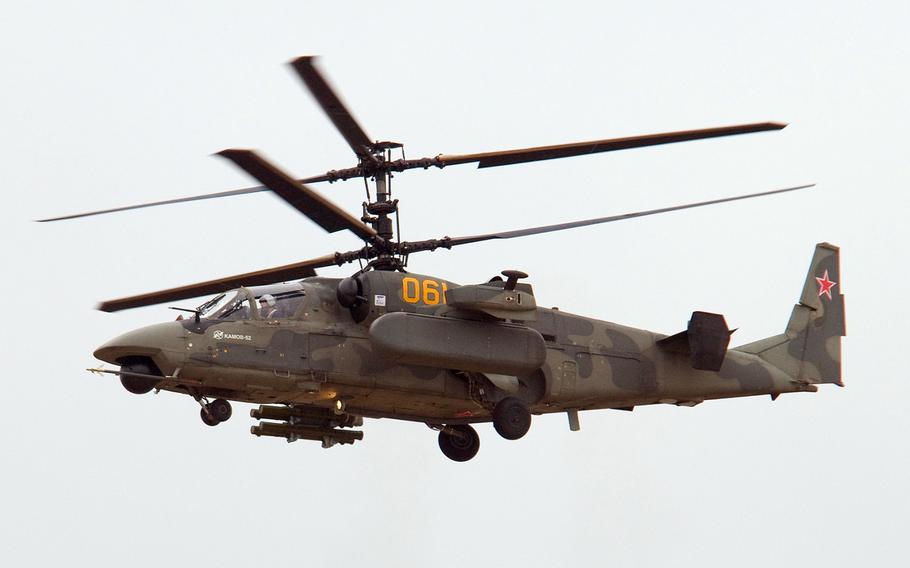 PARIS — In a twist of fate, Russia may end up pitching its newest helicopter to the very people it was designed to fight.

At the Paris Air Show in June, Russia held a coming-out news conference for the Kamov company’s Ka-52 Alligator, which they say is now ready for export. The parastatal Russian export company Rosoboronexport is courting India as a buyer.

One of the key selling points, Kamov’s designers say, is that the Alligator can handle “hot-and-high” operating conditions, carrying heavy weapons loads in mountinous terrain and in intense heat — requirements borne out of the Soviet military’s bitter experiences in Afghanistan during the 1980s.

“Kamov-52 was conceived when Russian experience of combat operations in Afghanistan were quite alive,” said the chopper’s chief designer, Sergey Mikheev.

During their occupation from 1979 to 1989, the Soviets used Mi-24 gunships to hunt down Afghanistan’s Islamic rebels. The Mujahedeen, who included current President Hamid Karzai, fought back with Stinger surface-to-air missiles covertly provided by the Central Intelligence Agency.

In the bloody civil war between Mujahedeen factions that followed the Soviet withdrawal, Afghan Air Force Mi-24s fell into the hands of all factions, and some held by the Northern Alliance remained usable until 2001. With many Afghan pilots having at least some experience behind the controls of Russian gunships, after the fall of the Taliban the country’s nascent air force began purchasing Mi-35s — a modernized version of the Mi-24 — in 2008.

During the present war against the Taliban, Afghan and coalition helicopters have mainly faced the threat of rocket-propelled grenades, rather than the more deadly shoulder-launched surface-to-air weapons. Crashes like the one that killed two Pennsylvania National Guard soldiers, Chief Warrant Officer Jarett Yoder and Chief Warrant Officer Matthew Ruffner, when their AH-64 Apache attack helicopter went down in April are not uncommon, with the Taliban often claiming responsibility.

Mikheev said he respects the Apache, but said Russian designers had decided to put more armor on the Ka-52.

“The Russian military introduced their requirements to this new helicopters keeping in mind everything that proved itself useful, especially with respect to Sukhoi Su-25 aircraft. A lot of time has passed since then, but right now we still see that all those solutions were essential, quite essential.”

The Su-25 fighter jet was developed in the 1970s to provide close air support to Soviet ground troops.

One of its main features was armor plating — including a titanium bathtub around the cockpit — to protect pilots from missile strikes. Russia continues to fly the craft, which is very similar in concept to the U.S. A-10 Warthog, and it served in combat as recently as the 2008 Russian-Georgian war.

Alexander Dolin, a representative of Rosoboronexport, said he believes the most likely buyers of Ka-52 are countries in the Commonwealth of Independent States, which includes former Soviet states near or bordering Afghanistan such as Uzbekistan and Tajikistan.

“First of all, (potential buyers include) CIS countries, then our traditional partners and the countries who traditionally procure Russian aviation and land-based weapons systems,” Dolin said. “We think that this helicopter will be efficient in the countries where combat operations supposedly will be taking place in mountainous areas.”

In addition to flying 11 Mi-35s, the Afghan Air Force has more than 50 Mi-17 Russian-made transport helicopters and 30 more are on the way. In May, Afghan pilots were cleared for the first time to use the Mi-35’s twin-barreled Gryazev-Shipunov GSh-23 cannons, providing the air force with new ground-attack capabilities.

Norman Polmar, an author and analyst with the U.S. Naval Institute, said Afghanistan may well be interested in buying the Ka-52 as a replacement to the Mi-35. The Afghans are used to flying Russian helicopters, which cost less than Western types, are simple to maintain and perform well in hot-and-high conditions.

As for Russia, he added, “Countries want to sell to whomever they can.”

The Russian air force plans to phase out its Mi-24 fleet by 2015. They are slated to be replaced by the Mil Mi-28 Havoc — outwardly very similar to the U.S. Apache — and Ka-52s.

The Afghan Ministry of Defense is still in the process of building up its air force. MoD Spokesman Gen. Dawlat Waziri said there are no plans past the current finalized purchases, which he said should be filled by the end of 2014 when American combat troops are supposed to be gone from the country. He said that for the time being the air force was focused on intergrating the aircraft it has on order.

Many of the currently slated aircraft destined for Afghanistan are being purchased by the Pentagon. That includes a new $554 million contract for a batch of 30 Mi-17 helicopters purchased from Rosoboronexport, despite protests from the U.S. Congress against buying weaponry from a country that is supporting the regime of Syrian President Bashar al-Assad in that country’s civil war.

The 2013 National Defense Authorization Act approved by Congress included an amendment blocking the Pentagon from spending any funds with Rosoboronexport, but allowed the Secretary of Defense to waive the clause “if the Secretary determines that such a waiver is in the national security interest of the United States.”

“Given current timelines, the department has determined that Rosoboronexport is the only viable means of meeting ANSF requirements” for the helicopters, Pentagon spokesman James Gregory told Russian media outlet RIA Novosty in April.

Texas Senator John Cornyn, one of the sponsors of the NDAA amendment, said in a press release that he was unimpressed by the Pentagon’s justification for the contract.

“[T]hey want us to believe that we are promoting U.S. security by doing business with a Russian arms dealer that is helping an anti-American, terror-sponsoring dictatorship commit mass atrocities,” he said.

On Thursday, the Special Inspector General for Afghanistan Reconstruction said the Afghan air force still lacks the qualified personnel and expertise to operate and maintain the additional aircraft. It recommended putting all new purchases on hold until the Afghans develop that capacity.

Standifer.cid@stripes.com Heath Druzin and Zubair Babakarkhail contributed to this report.