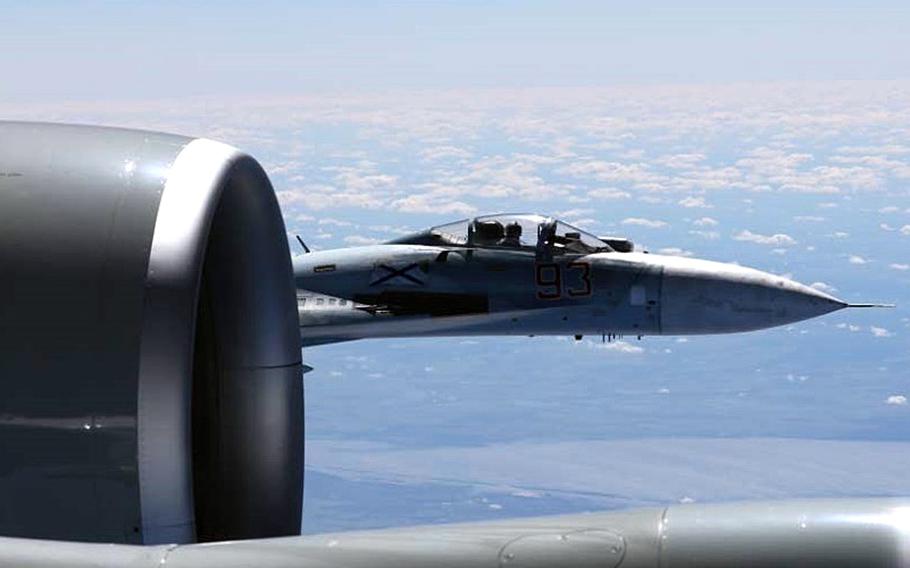 A U.S. RC-135U flying in international airspace over the Baltic Sea was intercepted by a Russian SU-27 Flanker June 19, 2017. On Monday, Jan. 29, 2017, a Russian fighter once again intercepted a U.S. jet, this time a Navy reconnaissance plane flying over the Black Sea. (Courtesy U.S. European Command)

STUTTGART, Germany — A Russian fighter on Monday flew within 5 feet of a U.S. Navy reconnaissance plane over the Black Sea, marking another close encounter that American military officials contend increases the risk of midair collisions.

A Russian SU-27 crossed directly into the flight path of a Navy EP-3 and forced the U.S. aircraft to fly through a wake of turbulence behind the Russian fighter, according to U.S. Naval Forces Europe.

Such encounters have been an ongoing concern for the U.S. military, which has faced a series of provocative intercepts by Russian aircraft during the past few years.

In November, a Russian fighter crossed within 50 feet of a U.S. surveillance aircraft flying over the Black Sea, blasting its afterburners and forcing the American aircraft into a stream of turbulence that caused the plane to tilt into a 15-degree roll.

Navy surveillance aircraft routinely fly out of an air station in Sigonella, Sicily. Many of the aircraft are specialized in anti-submarine warfare and electronic support measures.

Russian submarine activity in the Black and Mediterranean seas has intensified in recent years, according to the U.S. military.

Still, Russian and NATO military aircraft routinely interact during routine intercepts around the Baltic states and the Black Sea. In most cases, they happen without incident as aircraft follow a set of air safety protocols.

U.S. and NATO officials have complained the Russians engage in unpredictable maneuvers that include flying without transponders turned on.

In June, a Russian fighter flew toward a U.S. Air Force surveillance plane over the Baltic Sea with a “high rate of closure speed and poor control of the aircraft,” U.S. European Command said at the time. Last year, a Russian fighter barrel-rolled over the top of an Air Force RC-135 flying in international airspace, in a maneuver that the military said put the U.S. crew at risk.

The Navy said its aircraft was operating in international airspace and in accordance with international law when Monday’s intercept occurred.