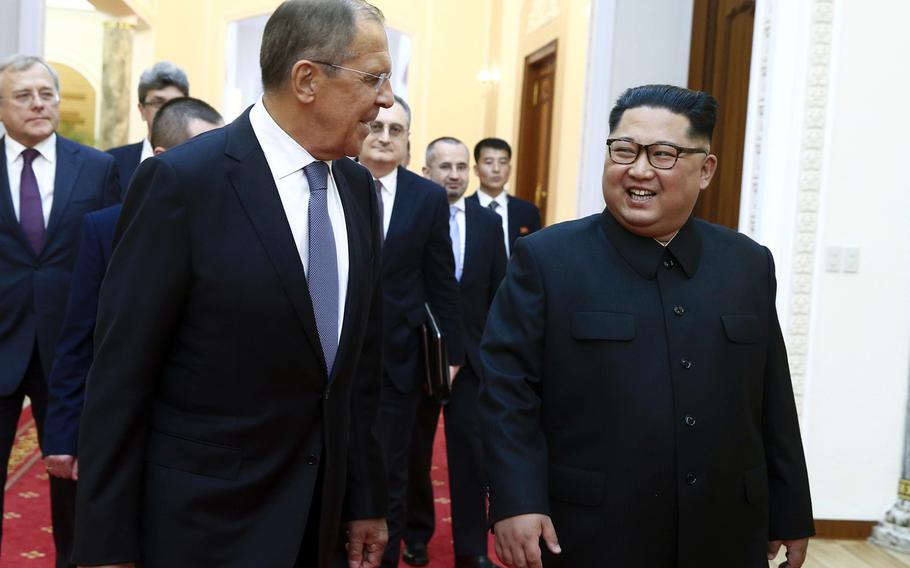 SEOUL, South Korea — As diplomats worked on three fronts to rescue a U.S.-North Korean summit, Russia’s foreign minister met with Kim Jong Un in Pyongyang on Thursday and called for the phased lifting of sanctions to resolve the crisis over the North’s nuclear weapons program.

It was a reminder that while President Donald Trump and North Korean leader Kim Jong Un may be the only leaders with seats at the table in Singapore, rival nations with competing interests are poised to complicate the deal-making process.

Meanwhile, Secretary of State Mike Pompeo and one of North Korea’s most senior officials prepared to meet for a second day Thursday after having dinner together the night before in New York. Former spy chief Kim Yong Chol is the highest-level North Korean official to visit the United States since 2000.

The White House has insisted it will maintain its so-called maximum pressure campaign aimed at isolating the regime until the North agrees to abandon its nuclear arsenal.

But Sergey Lavrov, the first Russian foreign minister to visit North Korea in nine years, offered support for Pyongyang’s desire for a phased approach to denuclearization that includes the lifting of economic sanctions.

“It is absolutely clear that, as we start this discussion on how to resolve the nuclear problem on the Korean Peninsula, it is understood that the solution cannot be comprehensive without the lifting of sanctions,” Lavrov said after meeting with his North Korean counterpart Ri Yong Ho.

“This cannot be achieved in one move,” he said, according to Russia’s state news agency TASS. “It is impossible in one move to ensure denuclearization. That’s why certainly there should be some stages.”

He also met with the North Korean leader, according to the Russian Foreign Ministry.

Russia, which holds veto power in the U.N. Security Council, has frequently been accused of undermining the U.S.-led effort to isolate the North with economic sanctions, which many believe have begun to bite.

Kim also has traveled twice to China for meetings with President Xi Jinping as Beijing seeks to maintain influence with its communist protégé.

Pompeo, who also met with Kim during his two trips to Pyongyang, tweeted late Wednesday that he and Kim Yong Chol had a “good working dinner” with “steak, corn, and cheese on the menu.”

The men planned to continue discussions Thursday focusing on whether the Trump-Kim summit will go ahead as planned on June 12. Trump canceled the meeting with fanfare last week, citing hostility from the North Korean side, but he softened his tone after the North quickly published a conciliatory letter saying it was still ready to meet “at any time.”

Other U.S. and North Korean officials were holding separate meetings in the heavily fortified border that divides the peninsula and in Singapore to discuss points of agreement and logistics for a possible meeting.

“The conversation is going to be focused on denuclearization of the peninsula,” she added. “As long as that is part of the discussion, we’re going to continue to shoot for the June 12th and expect to do that.”

Senior officials from North and South Korea also planned to hold high-level talks in the border village of Panmunjom on Friday, just over a week after the North canceled an earlier round to protest Seoul’s participation in joint Air Force drills with the United States.

President Moon Jae-in and Kim agreed during an April 27 summit to work toward a permanent peace and the “complete denuclearization” of the peninsula, but the final declaration was short on details.

Moon, who has played a key role in brokering the U.S.-North Korean talks, called for measures to support economic cooperation with the North if denuclearization is successful.

“Our economy will face a great change if South and North Korean relations improve and peace is established on the Korean Peninsula,” he said during a governmental meeting to discuss fiscal policy. “We will also need to review in advance the role of our fiscal spending to support a new economic map … in preparation for a resumption of economic cooperation between North and South Korea.