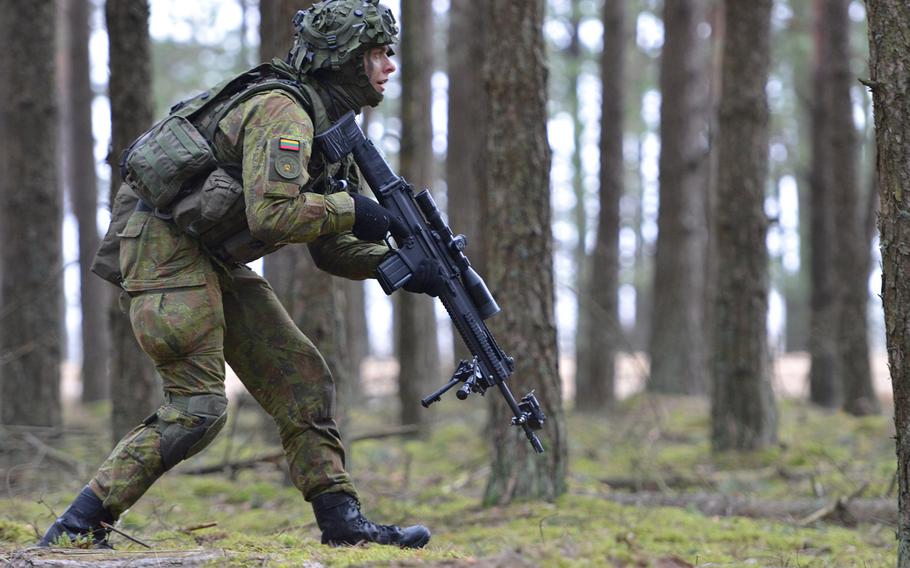 A Lithuanian soldier participates in a combined forces exercise with U.S. Army soldiers on a range outside Rukla, Lithuania, on Tuesday, April 4, 2017. (Shiloh Capers/U.S. Army)

STUTTGART, Germany — A Russian buildup of high-readiness combat forces means Moscow could invade the Baltic states in less than 48 hours, potentially overrunning allied troops who would be difficult to reinforce, according to a new Lithuanian threat assessment.

The annual review of threats facing Lithuania and its neighboring states comes as the U.S.-led NATO alliance sets up four multinational battalions to reinforce members in the east. It calls into question whether the force is muscular enough to blunt a Russian offensive.

“In case of Russian military aggression, countries in the region would have a possibility to contain the aggression effectively only if the required sufficient defensive capabilities were already present in the region before the start of the conflict,” says Lithuania’s 2017 National Security Threat Assessment. “The capabilities should be sufficient to conduct operations independently from the main allied forces and prior to their deployment.”

By virtue of its geographic advantage, Russia dominates the balance of military power in the immediate region around the Baltics, which has long been a source of concern for nations such as Lithuania that were once dominated by the Soviet Union.

“Currently, Russia is capable to conduct combat activities against the Baltic States with 24-48 hrs notice,” the Lithuanian report said.

The assessment stopped short of describing what kind of force would be needed to counter Russia in the Baltics, but U.S. security analysts who have war-gamed various combat scenarios say several brigades of roughly 5,000 troops each are required. Other military experts disagree, saying in the unlikely event Russia were to invade the Baltics, it would be a tactical mistake to mass forces in an indefensible location where large numbers of troops could be trapped. NATO’s top military commander and head of U.S. European Command, Gen. Curtis M. Scaparrotti, says there is room for a larger military presence on the Continent.

“We can deal with the challenges we have today with the posture we have, but it’s at increased risk,” Scaparrotti said during testimony last week before Congress. “And it’s increased risk — if we have a conflict it’s going to be increased casualties, it’s going to take more time, etc. I will sleep more comfortably as our posture improves.”

Scaparrotti said he wants more ground forces in Europe, including an entire Army division. U.S. Army Europe has already begun looking for places to base more troops, though it remains unclear whether a military buildup in Europe is what the Trump administration has in mind as it looks to improve relations with Moscow.

Tensions have been mounting between Moscow and the West, and NATO’s gradual buildup along its eastern flank has been a flash point since the crisis in Ukraine erupted three years ago. NATO calls the moves defensive in nature and a response to what it sees as an increasingly aggressive and unpredictable Russia. Moscow says it has no designs on NATO territory and that the buildup presents a threat to its own territory, particularly the isolated enclave of Kaliningrad.

U.S. military officials have acknowledged the chances of a Russian invasion of NATO territory is extremely unlikely. For NATO, the challenge is to strike the balance of committing sufficient forces to quell the anxieties of allies and send a signal to Moscow without provoking a tit-for-tat escalation.

Allies in the Baltics, however, say Russia is already meddling in their affairs through increased espionage, cyberattacks and propaganda campaigns.

The pace of information operations is expected to pick up ahead of a major Russian military exercise to be held later this year, which will deploy about 100,000 troops near the borders of the Baltic states, the Lithuanian assessment said.

“The biggest threat against Lithuania is still posed by covert espionage and influence operations supporting the aims of Russian foreign policy, the report said. “Russia seeks to degrade NATO forces in Lithuania and boost the society’s opposition towards deployment of troops in applying information and cyber attacks in order to spread untruthful and provocative information.”

In particular, Lithuanian officials have taken note of campaigns that use historical arguments, drawing comparisons to similar disinformation efforts that took place ahead of Russia’s intervention in Ukraine.

NATO and EUCOM have sought to get a better grasp of how to counter Russian information campaigns, forming a new task force known as the Russian Information Group, which analyzes threats. EUCOM’s Scaparrotti has said that group needs more resources.

In the Baltics and Poland, NATO now has four battalions of roughly 1,000 soldiers each. The U.S.’ 2nd Cavalry Regiment is leading a force in northeastern Poland roughly 100 miles from Kaliningrad, which also borders Lithuania.

In September, thousands of troops will participate in the massive Zapad 2017 war games held by Russian and Belarusian armed forces.

Lithuania said it is concerned the close proximity of forces could increase the risk of a military miscalculation and possible conflict.

“Some of the exercise training ranges will be very close to Lithuanian border, therefore a possibility of deliberate or accidental incidents should not be ruled out,” the document says.