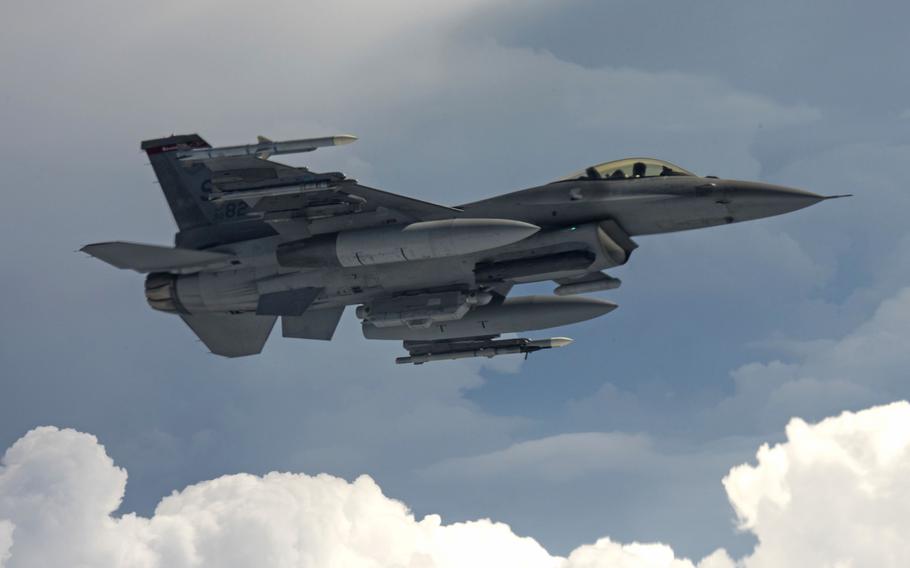 A U.S. Air Force F-16 Fighting Falcon over Germany, May 30, 2017. A NATO F-16 was scrambled Wednesday to intercept an aircraft carrying the Russian defense minister over the Baltic Sea (Preston Cherry/U.S. Air Force)

A NATO F-16 was scrambled Wednesday to intercept an aircraft carrying the Russian defense minister over the Baltic Sea, the second close encounter this week between Russian and western planes.

Russian media said the NATO F-16 approached the minister’s aircraft, which was being escorted by SU-27 fighters in international airspace. Video of the incident showed one of the Russian fighters maneuvering toward the F-16 and tilting its wings to show that it was armed. The F-16 then flew off.

Defense Minister Sergey Shoigu was enroute to Kaliningrad, Russia’s heavily fortified Baltic enclave bordered by NATO territory, Russian news agencies said. They said he was going there to for a meeting with military commanders.

NATO said it was forced to scramble its fighters because the Russian aircraft did not respond to air traffic control.

“NATO can confirm that three Russian aircraft, including two fighters, were tracked over the Baltic Sea earlier today,” a NATO official said. “ As the aircraft did not identify themselves or respond to air traffic control, NATO fighter jets scrambled to identify them, according to standard procedures. Our pilots acted in a safe and professional way. NATO has no information as to who was on board the Russian planes.”

NATO did not say which member state was flying the F-16s. However, it was likely a Polish aircraft. NATO’s Baltic air policing mission rotates among members with Spain and Poland currently leading the effort. Poland flies F-16s while Spain flies F-18s.

A Russian parliamentarian called the incident an act of “military rudeness.”

On Monday, the U.S. accused a Russian fighter of flying within several feet of a U.S. surveillance aircraft flying over the Baltic Sea. U.S. European Command deemed the Russian intercept dangerous.